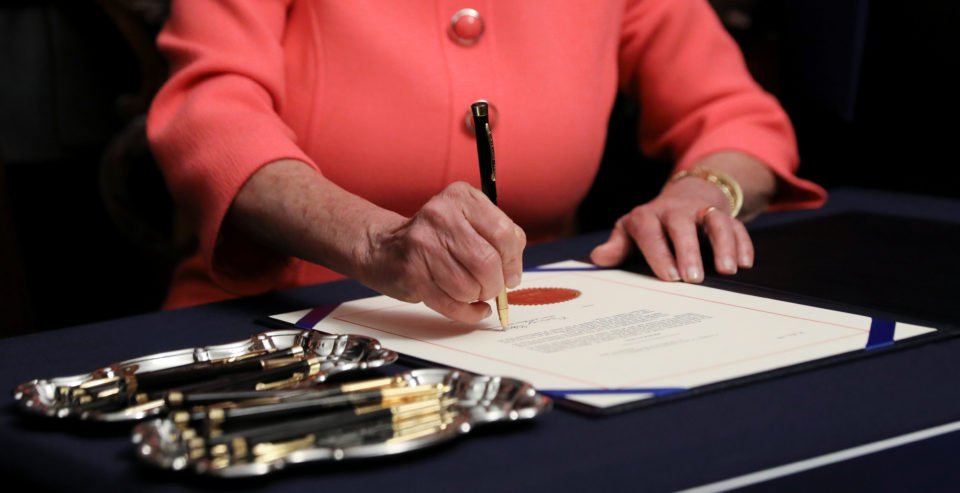 As US president you are not supposed to blackmail foreign powers that unless they dig up dirt on your political opponents back home you will withhold military assistance. And if Congress decides to investigate whether you have engaged in such nefarious activities you must not obstruct the process.

He is not the first. There will be no “whitewash at the White House” President Richard Nixon said after the burglary at the Democratic Party HQ in the Watergate building in Washington in 1972.

Both men faced impeachment and both were caught in wiles of their own making.

Nixon had his conversations in the Oval Office recorded for posterity. But when the Supreme Court decided they were not protected by executive privilege and ordered their disclosure, he was forced to resign before he was impeached as they proved he was the prime instigator behind a whitewash at the White House. However, his resignation enabled him able to wangle a pardon for any crimes he might have committed as president and he retired to California.

However, the Senate voted 55 to 45 to acquit Clinton. It seems most senators did not deem it serious enough to warrant Clinton’s removal from office, presumably because it was not committed in the exercise of his duties as president. The president’s extra marital relations were not part of the job of president; although rumour has it that on one sexual encounter Arafat and Rabin were kept waiting – they had come to the White House to sign the Oslo Middle East peace accords and the president was late for the signing ceremony.

Speaker of the House of  Representatives, Nancy Pelosi, said that whatever else happens at Trump’s trial, he will forever be stigmatised as an impeached president, which is nonsense of course, and made worse by the fact that she used a number of pens to sign the articles of impeachment, apparently to give the pens as mementoes to her acolytes. It is doubtful if impeachment per se will damage Trump personally or his prospects of winning a second term in November 2020.

Impeachment is the process by which a US president is removed from power in place of a coup d’etat. It is true that impeachment has been on the cards since Trump was elected, which made him feel a victim of constant attempts to overthrow his administration. But that’s because of the kind of person he is rather than any conspiracy against him by the establishment.

Under the US federal system, the president is elected by an electoral college as the executive arm of government. The candidate who wins most delegates becomes president. Therefore a president’s removal from office is very undemocratic and very destabilising of the Union since his election to the office of president is by the people and the states working in tandem under a system designed to afford the president maximum state and democratic oomph.

The House of Representatives represents the people and the Senate represents the States as the legislative arm. The Senate is institutionally more in tune with the state of the union and its needs. Senators are the elders of the Union a bit like the House of Lords in UK.

Until 1913 they were elected to the Senate by the state legislatures, but the constitution was amended and they are now elected directly by the people for six years.

As is well known the American system is one of checks and balances. Thus the House of Representative decides whether to impeach a president and the Senate decides whether the president is guilty and should be removed following impeachment. In other words the Senate acts as the jury and the proceedings are presided over by the Chief Justice.

But trial on impeachment is not a criminal trial. It is a political trial. The jurors are not randomly selected. They are members of the Senate of the US Congress – a very party political institution of government.

At present there are 100 senators; 53 Republican, 45 Democrat and two independent. Conviction and removal of a president on impeachment requires a two thirds majority.

The Senate does not pretend to be an impartial tribunal. Last week the senators took the oath to do impartial justice under the constitution to Trump. By contrast the jury oath in criminal trials is to try the defendant and give a true verdict according to the evidence. So it is possible for the Senate to find the president not guilty even if the all evidence points to guilt provided the result is just under the constitution.

It is not even clear who bears the burden of proof and whether the standard of proof is beyond reasonable doubt. That said, it is trite law that he who asserts must prove and that the more serious an allegation against an accused person the stronger the evidence required to prove it.

Unlike a normal criminal trial, no sanction follows conviction, except removal from office.

Trump is not as troubled as Richard Nixon was during the Watergate scandal that toppled him from power, but that’s because Nixon was not sure he had the support of the Senate.

Trump feels safe because the Senate is not going to return a verdict according to the evidence. They will decide the case according to party affiliation and political expediency.

The idea behind this mishmash of law and politics called impeachment is that it is only if a president has done something so egregious that irrespective of political affiliation no right-thinking Senate would fail to remove.

At its highest, the case against Trump is that he was being Trump and no Republican senator will remove him from office for being himself.