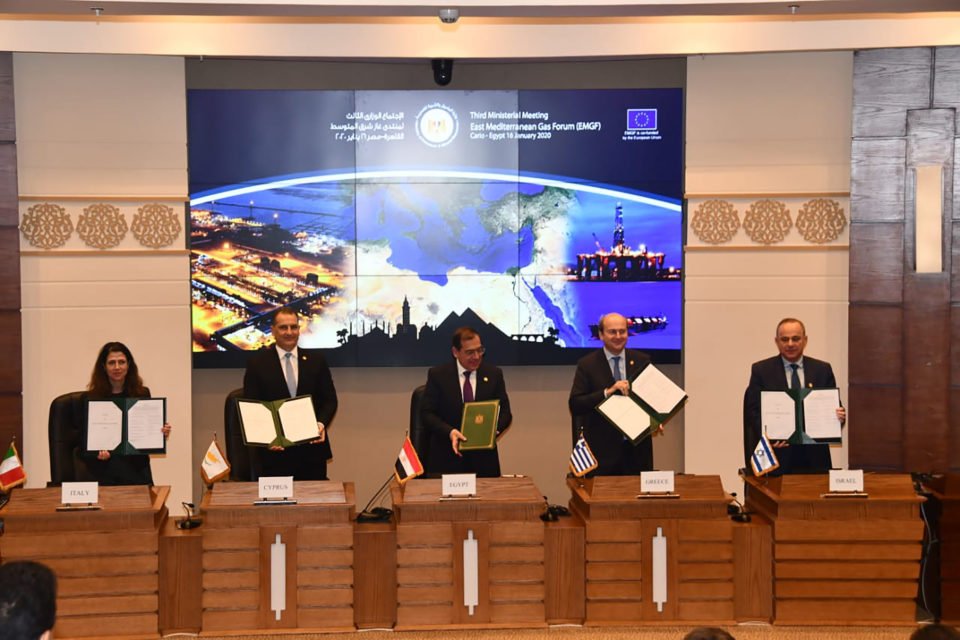 The EMGF signing ceremony in Cairo this week

Despite 2020 starting with some positive developments, the East Med is a region in turmoil. Turkey is determined to make its presence felt through unsustainable claims, aggression and intimidation.

The latest is the Turkey-Libya agreement. It is not in accordance with the UN law of the seas, Unclos, and ignores the entitlement of islands to have exclusive economic zones (EEZs). Understandably this has been condemned by Cyprus, Greece, Egypt, Israel and Italy, but also the EU and the US.

Nevertheless Turkey, not only is ignoring all criticism, but has just declared a Navtex south-east of Crete threatening to start exploration surveys and even issue exploration licences. Greece has already warned that it will react against any activities in its EEZ. The risk of an accident leading to a hot incident is increasing.

Turkey is also continuing its presence in Cyprus’ EEZ – with more drilling just announced – and is likely to escalate this as and when Cyprus’ new drilling round starts.

Following recent encouraging statements by Greece and Turkey, the time may be ripe for new initiatives to overcome these problems.

2020 started with three positive developments. The first was the signing of the EastMed gas pipeline inter-governmental agreement by Greece, Cyprus and Israel. Italy did not sign, but confirmed its support – so did the EU and the US. It constitutes a milestone in terms of East Med politics, promoting closer cooperation.

A second, was the formal endorsement this week by the energy ministers of Cyprus, Greece, Egypt, Israel, Italy, Jordan and Palestine, of the East Med Gas Forum (EMGF) to become an international energy organisation. Its purpose is to promote the commercial exploitation of natural gas in the East Med. The forum sent a strong political message of regional cooperation, open to Turkey if it complies with its terms.

A third was that Israel has just started regional gas exports from the Leviathan gas-field to Egypt and Jordan.

And there could be a fourth – drilling is scheduled to start soon in Cyprus EEZ. Once drilling starts, more discoveries are quite likely. The problem is not discovering gas, but selling it to global markets.

The new European Energy Commissioner, Kadri Simson, said last week “In the future we have to focus on electrification. And gas should not be natural gas anymore.” This future has started. European Commission studies show natural gas use in Europe declining by 20 per cent by 2030 and by more than 75 per cent by 2050. With cheap Russian, Norwegian, Qatar and US imports, Europe has all the gas it needs at low-cost. Its capacity to take more gas as we approach 2030, and beyond, is declining fast. Importing expensive East Med gas is not a priority.

Even though gas demand is expected to carry on increasing in Asia, competition from other cheaper fuels, such as coal and renewables, is keeping prices low. In China and India security of supplies and the high cost of LNG are impacting growth of LNG imports.

Despite its intention to promote East Med gas exploitation, the EMGF is not in a position to secure sales in Europe or Asia. This is driven by global markets and prevailing, competitive, prices. Other than Egyptian LNG, East Med gas will have a hard time penetrating these markets, due to its high cost.

Another challenge is that the commencement of drilling in Cyprus’ EEZ appears to be delayed yet again, to the extent that the energy minister could not even give a start-date. A factor, that is likely to affect the complete drilling programme, is Turkish threats and potential interference

Turkish attitudes are hardening. Only this week, the Turkish president stated that efforts made to ‘isolate’ Turkey have been thwarted by the actions taken by Turkey ‘to protect its rights’. Claims that its continuing provocative tactics are isolating Turkey internationally are far from hard realities.

Cyprus is in danger of appearing to be without strategy and proper planning, merely reacting to situations beyond its control. The time may be ripe for new initiatives.

Have we considered the possibility that Turkey is exploiting our fixation with gas – which we may not be able to export – to perpetrate its own agenda, which appears to be to establish influence and hegemony over the region stretching from the Caspian to Algeria? Gas is not Turkey’s priority. But aggression does not lead to a solution either.

Cool thinking may be needed here. The lead appears to be coming from Greece. Prime Minister Kyriakos Mitsotakis confirmed that his priority is a solution through discussions with Turkey. He added that “if we cannot find a solution then we must agree to refer the dispute to the International Court of Justice (ICJ) in the Hague. And to be perfectly clear, I am referring to the definition of the continental shelf and maritime zones in the Aegean and the eastern Mediterranean,” in accordance to international law.

A laudable position. As long as the current situation is left unchecked, Turkey is hardening and advancing its position. There should be no illusion that any support from the EU and the US will be enough to thwart Turkey’s expansionist policy, using energy as a pretext. International condemnation, or even isolation, does not seem to affect or deter Turkey.

In the meanwhile, speaking in Ankara this week, the Turkish Foreign Minister, Melvut Cavusoglu, said “in the East Med we are ready to sign a similar agreement (as with Libya) defining maritime jurisdiction with everyone and especially with Greece, except for Greek Cyprus.” He added that Turkey is “in favour of fair sharing through dialogue and diplomacy, so long as they do not try to exclude Turkey.” He left potential referral to the ICJ open.

The EU also appears to be prioritising dialogue with Turkey, over sanctions, despite concerns by Cyprus.

What the East Med needs is to solve its problems through dialogue and cooperation. What we need is a long-term strategy, not just based on gas. This may then open up regional energy markets, which may end up being the best option to exploit East Med energy resources.