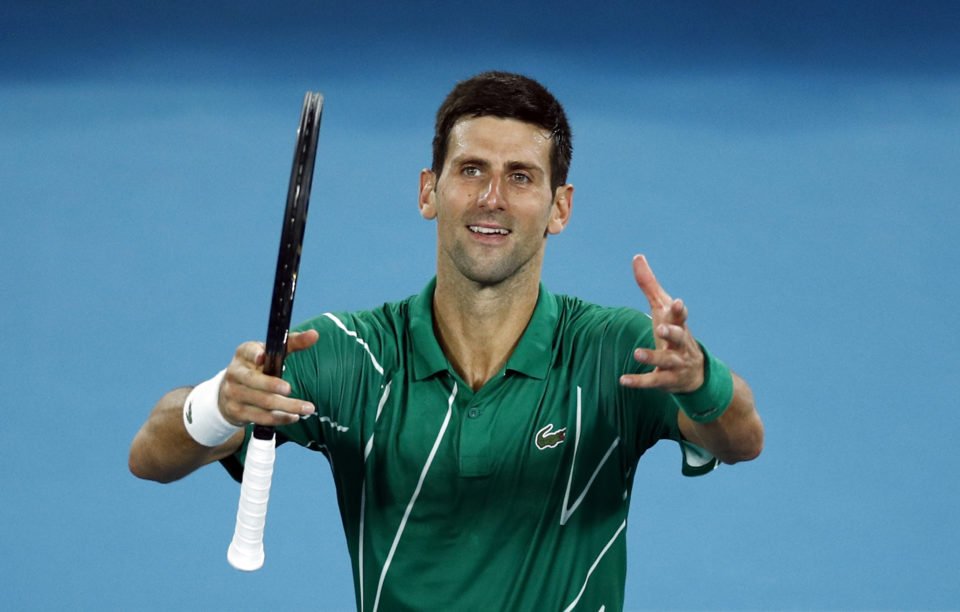 Novak Djokovic dropped a set in the first round of the Australian Open for the first time in 14 years but recovered to beat Jan-Lennard Struff.

Djokovic is going for an eighth title at Melbourne Park and is the clear favourite but he admitted he has focused on recuperation over the past week after an unusually-intense build-up that involved leading Serbia to the inaugural ATP Cup trophy.

He did much right in the night session on Rod Laver Arena and will not be overly concerned about the third set claimed by big-hitting German Struff, with Djokovic responding decisively in a 7-6 6-2 2-6 6-1 victory.

The second seed said: “I thought I started off well, I was a break up in the first set, he came back. Second set I played really well then he turned it around. Credit to him for fighting, he’s a very powerful player.”

Roger Federer meanwhile remains cautious about his Melbourne hopes despite a convincing first-round win over Steve Johnson.
The 20-time grand slam champion had not played a competitive match since the ATP Finals in November and spoke ahead of the tournament about his concerns that he might be rusty.
There was little evidence of that as he breezed past American Johnson under the Rod Laver Arena roof, winning 6-3 6-2 6-2 in just an hour and 21 minutes.

Elsewhere, last year’s semi-finalist Stefanos Tsitsipas began his campaign in convincing fashion with a 6-0 6-2 6-3 victory over Italian Salvatore Caruso.
The 21-year-old was once again backed by Melbourne’s large Greek community but admitted he has reservations about their noisy support.

“I really like that they come and support me because that gives me a lot of positives in my game,” said Tsitsipas. “I don’t really know why they want to go the extra mile some of the times.
“I think they should be a little bit more respectful to the opponents. I would describe it as a football field attitude, which doesn’t really belong in tennis.”

In the women’s draw on Monday, Coco Gauff defeated Venus Williams again.
The 15-year-old’s success in the first round at Wimbledon last summer catapulted her to global stardom.

With Gauff now a top 100 player – and 39-year-old Venus having been a doubt for the tournament with a hip injury – it was far less of a surprise to see the teenager come through 7-6 6-3 under the roof on Margaret Court Arena.

Elsewhere, Serena Williams began her campaign in emphatic fashion with a 6-0 6-3 victory over 18-year-old Russian Anastasia Potapova.
The 38-year-old is making her latest bid to equal Margaret Court’s record of 24 grand slam singles titles having lost in four finals since returning to the tour nearly two years ago after the birth of daughter Olympia.

Serena appears particularly determined to make this the one, and she said: “I think it’s factored a lot into my game, and now it’s just more or less about doing the best that Serena Williams can do.

Australia’s great hope, top seed Ashleigh Barty gave her fans a scare by losing the first set to Ukraine’s Lesia Tsurenko but rectified the situation quickly to win 5-7 6-1 6-1.
The 23-year-old won her first title on home soil at the Adelaide International on Saturday, and she said: “It’s a tight turnaround. The start of the second set I sharpened up and did what I needed to do.

“This is probably the moment I’ve been looking forward to the most. I couldn’t wait to walk out on this beautiful court.”

Defending champion Naomi Osaka trailed Czech Marie Bouzkova 4-2 in the second set but she reeled off the next four games to win 6-2 6-4.
Petra Kvitova, who Osaka beat in a dramatic final 12 months ago, was the quickest winner of the day, taking just 50 minutes to swat aside fellow Czech Katerina Siniakova 6-1 6-0 under the roof on Margaret Court Arena.

Caroline Wozniacki began her final tournament with a 6-1 6-3 victory over American Kristie Ahn on a rain-affected day.