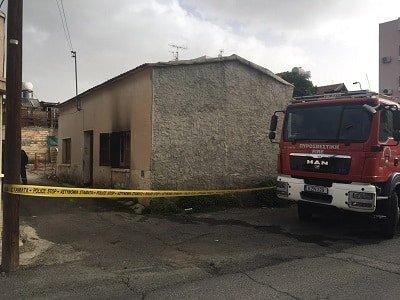 A man who admitted killing a pensioner by jumping on his chest and setting his house alight knew what he was doing despite having learning difficulties and behavioural disorders, a prison psychiatrist testified on Monday.

During the hearing, prison psychiatrist Agathe Valianidou, who has been observing Christophorou, was asked to answer questions about the defendant’s mental state, after his lawyer argued that his client has reduced intellectual capacity.

“The defendant has mild cognitive impairment, but he is capable of learning as he has attended special schools since the age of seven,” Valianidou told state prosecutor Thanasis Papanikolaou.

She explained that the defendant “was found to have behavioral disorders and this led him to use and depend on illegal substances that fuelled abusive behaviour.”

But she added that at high school Christophorou had been a swimming champion and was later able to drive a car and a motorbike, “all activities that require particular skills and concentration”.

“Therefore, I believe he chose to commit the crimes he is accused of. The whole process of his actions was a series of acts showing that he knew what he was doing.”

In mitigation she added that the defendant deeply regrets what he did to the victim.

“The young man has been living in a chaotic environment, has been consuming drugs on a regular basis and has not received proper medical attention,” she said.

“However, he chose to do what he did, he is responsible for it.”

Christophorou will be sentenced on January 30.

Christophorou broke into Mavrommatis’ house on January 27, 2019 and reportedly told police he threw the pensioner on the ground and jumped on his chest until he died.

He then reportedly took €50 and set the house on fire using a lighter. On the same day, he robbed a 96-year-old woman.

Police arrested him two days later. During investigation, officers found the shoes he was wearing on the day of the killing, which still had traces of blood on them.

The suspect admitted to all charges.