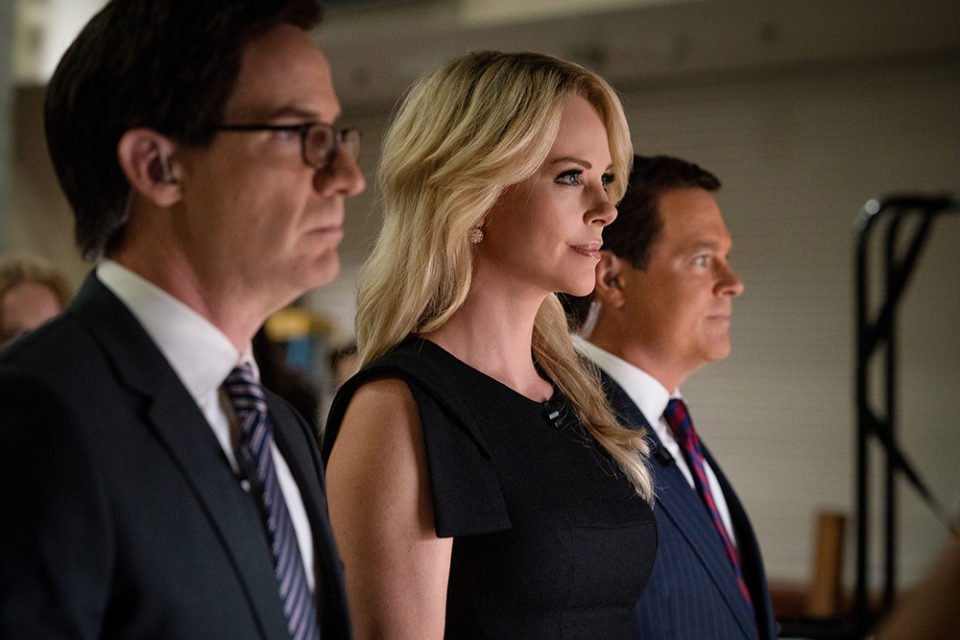 Charlize Theron is unrecognisable as Fox News star Megyn Kelly in Bombshell, a film that looks at the sexual harassment scandal at the network. She talks to Laura Harding about how Me Too has changed things for women, and the complexity of making a film about the controversial conservative news channel.

In the summer of 2016, a group of female TV stars toppled one of the most powerful men in global media.

The controversial conservative news network was the unlikely centre of one of the first strikes in the overturning of a long history of workplace harassment and now it’s being given the big-screen treatment, with Charlize Theron as Kelly and Nicole Kidman as Carlson.

“It lends itself to great storytelling,” Theron says as she nurses a cold on a chilly day in London.

“I think putting all of your feelings aside, your political views, your values, and whatever your issues are with Fox, or Rupert Murdoch, or all of that baggage that you bring to it, you have the first story that catapulted us into this movement, and it’s coming out of a place like Fox.”

That movement, of course, is Me Too.

“Ailes’ fall from grace was triggered when Carlson slapped him with a lawsuit alleging sexual harassment after she was unceremoniously fired.”

Soon, more and more women came forward with their own stories, including the network’s biggest star Kelly, who had famously clashed with Donald Trump during one of the televised presidential debates.

The film visits the Fox newsroom in the two weeks it took to bring down this titan of the industry, told through the eyes of Kelly, Carlson and a fictional producer called Kayla Pospisil, played by Margot Robbie.

And while some might blanch at the idea of divisive figures like Kelly, who famously declared Santa and Jesus were white, the film doesn’t shy away from the qualities that have made Fox News personalities, and the people that empower them, so controversial.

Kelly is just one in a long line of complex figures that 44-year-old Theron has explored, ranging from her Oscar-winning turn as serial killer Aileen Wuornos in Monster, to Imperator Furiosa in Mad Max: Fury Road.

“If this story was being told in a space that felt warmer and the characters were a little bit lovelier, smiled a bit more and you could hug them and feel sorry for them a little more, it would be more conventional,” she says thoughtfully.

“I think that is quintessentially what is always seen with these stories.

“For the first time, we are realising that women can be completely a part of the problem, and women also deal with these issues very differently from each other.

“All of those things are finally being addressed.”

It’s been more than two years since the Harvey Weinstein scandal shook Hollywood, but South African-born Theron points out that the Fox News shake-up happened more than a year before the Me Too movement catapulted into the mainstream.

“The world wants to deal with sexual harassment like it’s this thing that happened in the past, and it should be, but unfortunately it’s not,” she says.

“If we didn’t have access to the formats that we have now – social media, more places for women to be heard – I don’t know if we would have had the longevity that we have had in the last two years with movements like Me Too and Time’s Up.

“It’s a re-education for all of us. We all have to look at our behaviour and it’s within those nuances that it becomes very tricky.

“But I think if we have to over-correct for a little while, that’s OK.

“We will get to the other side of it, where we can all joke again and everything is going to be fine, but I think it’s time for women to be able to say we don’t want to work in these environments anymore.”

The environment Bombshell depicts can be uncomfortable to confront. Harassment ranges from pressure on women about how they dress, to stomach-churning coercion.

But it also explores the grey areas that so often muddy the waters around these issues.

“We are finally talking about the nuances and the fine strokes with that small little brush,” Theron says, “and the nuance of how messy and complicated these things are.

“These things are not black and white. They really truly live in the grey zone, and the psychological abuse that women go through every single day, week after week, month after month – those are the things we have never really talked about.”

She pauses for breath.

“I think women are really empowered by us finally acknowledging that that is b******t and it shouldn’t be around. We should be able to go to work and not be hassled or have a comment thrown at us, and that thing where you have to sit in a room and laugh at your boss’ jokes a little bit louder to placate him.

“All of those things are finally being talked about.

“But it also looks at the idea that what a harasser looks like and what a victim looks like is not necessarily what we have always imagined them to look like.

“I think that’s ultimately what will give us a real solidified change when it comes to these issues.”

Bombshell is released in UK cinemas on January 17.