A tortuous 15-year fight over a dodgy property sale and defamation case may finally be coming to an end this Friday when the supreme court is due to hear a British man ’s appeal.

The appeal alone has taken nearly eight years to be heard.

In 2005, Conor O’Dwyer bought a property in the Famagusta district which ended in a bitter legal dispute when the developer resold his house to another British family at a higher price.

He has arrived nearly a week early in anticipation of the case and is protesting outside the supreme court in Nicosia. Pictures O’Dwyer posted on Twitter show he has turned up well prepared with posters, toothpaste and a toothbrush, a tent with placards criticising Cypriot justice and other gear to see him through until Friday.

According to O’Dwyer not only was the original sale to him registered with the land registry department, but the developer also kept the money he had paid.

‘This protest is about legal aid, I have spent a fortune on legal fees, travel expenses and translators etc. and now despite being ‘granted’ EU legal aid (Council directive 2002/8/EC) to continue my fight I have never received any funding. My appeal is on Friday, there is nothing translated. I am here to camp outside to expose this injustice because this is not what legal aid should look like.’ C.O’Dwyer

In 2012 courts ruled in favour of O’Dwyer on the grounds of the resale of his home, but also found him guilty of defamation of the developer and he was fined 60,000 euros.

“What we are fighting against is twofold. First is the issue that O’Dwyer won the case but was not awarded all the damages and legal fees he should have got,” his lawyer Giannos Georgiades told the Cyprus Mail on Monday. “And also that his freedom of speech was not respected when the judge found him guilty of defamation.”

Georgiades also says that O’Dwyer is a family man who was dragged into a drawn-out legal battle and went up against property developers at the height of their powers during the building boom of the early 2000s. 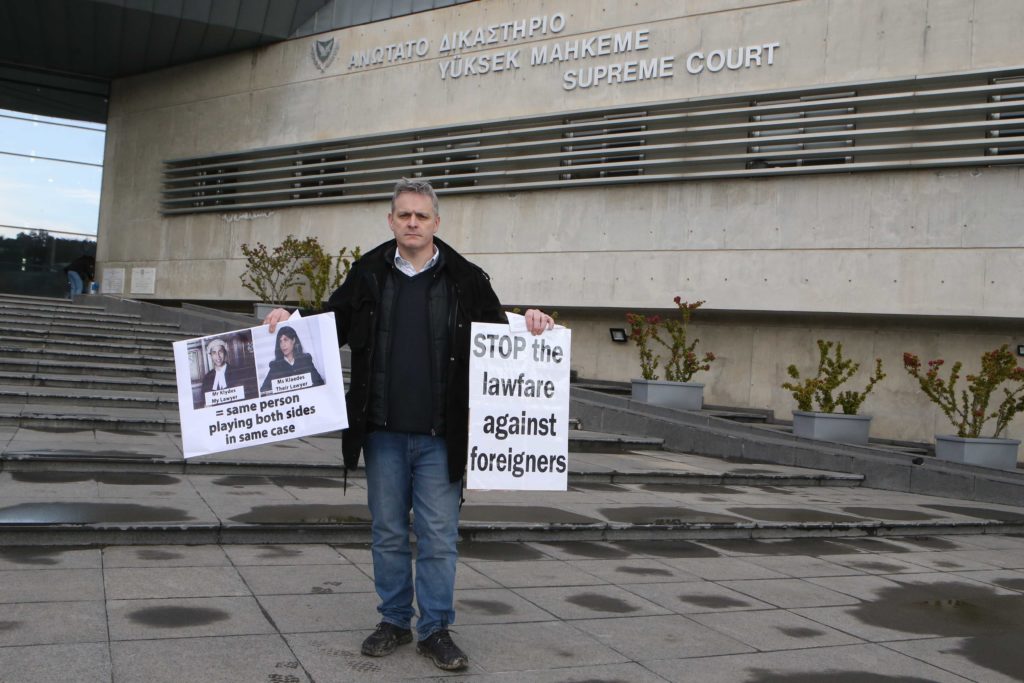 Since 2005 O’Dwyer has become active in various groups advising Britons not to buy properties in Cyprus. In March 2019 he organised a protest outside a major property exhibition in London and warned about purchasing houses on the island.

In November the British government upheld its advice of exercising “extreme caution” when buying a property if the title deeds are not readily available.

People buying property in Cyprus in some cases have become “trapped buyers”.

The British High Commission’s advice page still warns that developers take out mortgages on land or property and that signing a contract under these conditions makes the buyer ultimately liable for the loan.

Lawyers are not required to check for mortgages automatically.

While a law in 2015 attempted to solve the incredibly complex issue, as of 2018 there were still as many as 70,000 trapped property buyers without title deeds.

However, member of the House interior committee Andreas Kyprianou told the Cyprus Mail last month that “the 2015 law is working very well and many people have had their title deeds restored, the bill is being enforced.”

“The British government has been warning of this issue for a while, and perhaps there are some people with outstanding issues – but to my knowledge the bill is working well,” Kyprianou concluded.