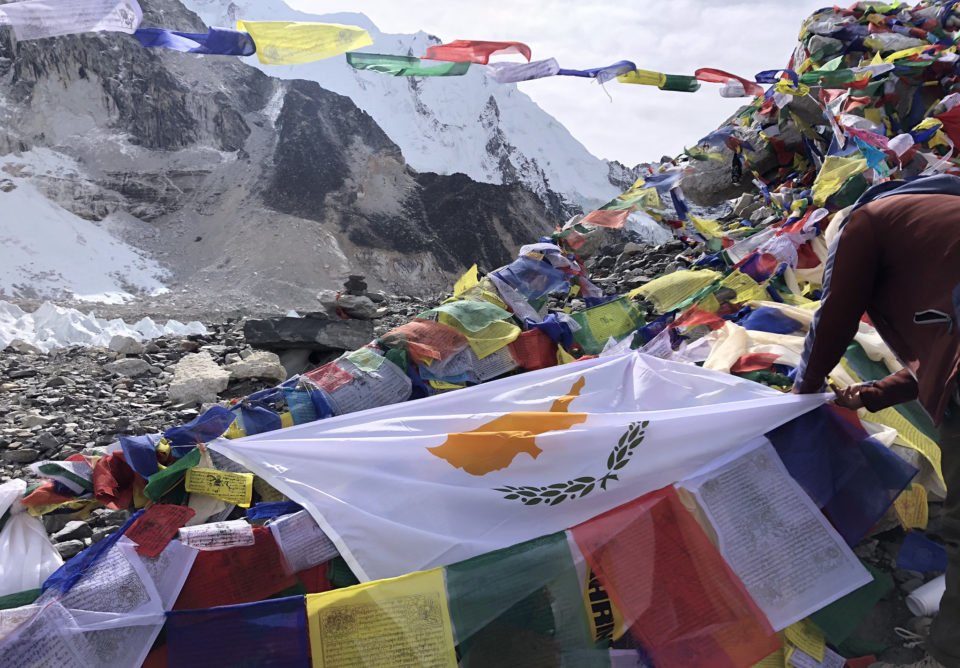 Edmund Hillary did it because it was there. For Apa Sherpa – who’s reached the summit over 21 times – it was a “a job; a source of income.” But Chrystalleni climbed Everest out of compassion…

This is a journey with kindness at its beginning. Chrystalleni Socratous, teacher by vocation and founder of Monkeynastix Cyprus – a movement education programme for children – was moved by the plight of one of her pupils, who suffered from a rare disease. Just three years old, the student was supported by local charity Unique Smiles (Monadika Xamogela), a non-profit which directly assists those with rare diseases. And, seeing the extent to which the charity made a real difference to her pupil’s life, Chrystalleni vowed to help. 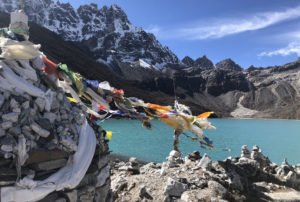 “It was more about raising awareness than funds,” she explains. “Unique Smiles runs the ’Adopt A Rare’ project which covers the needs of a particular child: their treatments, tuition fees, hospitalisation abroad. Their motto is ‘raise your hands for rare diseases’ and it’s this that gave me the Everest idea: I wanted to let the world know how they could help this charity by, literally, raising my hands as high as I could!”

5364 metres above sea level was the goal: Everest Base Camp. Admittedly it’s not the summit – “it costs over 50,000 euros to reach the summit,” says Chrystalleni, “and we were paying for the entire trip out of our own pockets!” – but reaching Base Camp is still an incredible feat!

Working and training with long-time friend Giannis Tsangaris, who accompanied Chrystalleni on her epic journey, meant four months’ of advance preparation. “Both Giannis and I are scuba diving buddies, so neither of us is strangers to sporting activity. But trekking up Everest is in a league of its own…

“We’d earmarked November for our trek; there’s little chance of cloud at that time of year, so we knew we’d be safer – and have better views! And that meant preparing from July; hiking, running, cycling, swimming six days a week from 5am, and in the gym each evening. It wasn’t easy,” she continues. “Being a mum and a business owner doesn’t leave me much free time, and Giannis is a police officer working shifts, which makes for a complicated training schedule. But we had a goal, and we stayed focused. My running shoes went with me everywhere, even on family holidays!”

By the start of November, the two were ready: tickets booked, vaccinations complete, and bags packed. “Getting there was quite easy,” Chrystalleni admits. “We travelled from Larnaca to Doha, and then on to Kathmandu for two nights before we took a flight to our starting point in Lukla. We’d engaged a guide through an international company, and designed our journey: an alternative route to the Everest Base Camp, a longer, more remote and more difficult path. But there was a good reason for this,” she adds. “For those children fighting a rare disease, life is not easy; it can be a rocky and hard, with endless hills to climb, and the path can be very different from the norm.”

On November 13, the trek began: a high-altitude test across gruelling terrain. For the next 15 days, the pair climbed to an intensely tight schedule, sleeping at night in ‘tea houses’ (basic lodging with no heating and, at higher altitudes, no showers or working loos) and eating whenever they could. “We had energy bars and chocolate with us during the day. And, in the evening, we ate carbs – rice, potatoes and pasta – because wildlife is protected in the region: meat must be carried up from lower altitudes and that’s not safe for tourists.”

As the two ascended, bright, cold days gave way to howling winds, freezing temperatures and altitude sickness. “We really noticed the lack of oxygen: you feel drained, your energy seeps away as you move. Then there were the headaches, gastrointestinal problems, and the trouble sleeping at night – the cold and the altitude make breathing painful. And we were lucky – that was only mild altitude sickness!

“The hardest day,” she continues, “was crossing Chola Pass.” At 5420m, the pass is higher than Base Camp, and the nine-hour trek takes in a dangerous glacier and a punishing descent to 4700m. “I remember looking up at the glacier, seeing the ropes along the route, and wondering how on earth I’d survive! Later that day, we heard another group had been air-lifted off the pass. Fortunately, I made it, and a big part of that was having Giannis by my side. He was continually positive, always saying ‘we’ve got this’. And of course we didn’t want to fail people. We knew that if we gave up, we’d be giving up on the people who believed in us.”

Finally reaching Base Camp on November 23 was exhilarating. “Such a feeling of accomplishment, satisfaction, excitement!” Chrystalleni enthuses. “It was hard to believe that we were really there!” Stopping to take just a few photos and plant the Cyprus flag – “obviously we weren’t the first Cypriots there; another climber had reached Base Camp in May, and I know of at least one Cypriot who has actually made the summit!” says Chrystalleni in awe – the duo set off on the long trek home.

Which, in some ways, was far harder. “We thought it would be easier coming back down, but we were very wrong,” she acknowledges with a wry smile. “Not only is your energy depleted, but you’re covering the same distance in half the time. We were hiking at least nine hours each day, quite an achievement for two people who can in no way call themselves mountaineers!”

Having raised almost 9000 euros, awareness, and their hands (from an unprecedented height!) for Unique Smiles, the two are now enjoying being back at sea level. “The entire trek was an amazing experience which taught us a great deal,” says Chrystalleni. “Especially about the importance of the mind. Physical fitness will only get you so far in life – and on Everest! I think we’ve become aware that, when the going gets tough, it’s mental strength that wins the day. It’s given us both a newfound respect for anyone suffering from a disease – rare or otherwise. And, I know it’s a cliché,” she concludes, “but it’s so true that what counts in life is not the destination but the journey. I guess the best views really do come after the hardest climb!”

Calling on all budding scientists

‘Happiness is subjective and it is different for everybody’