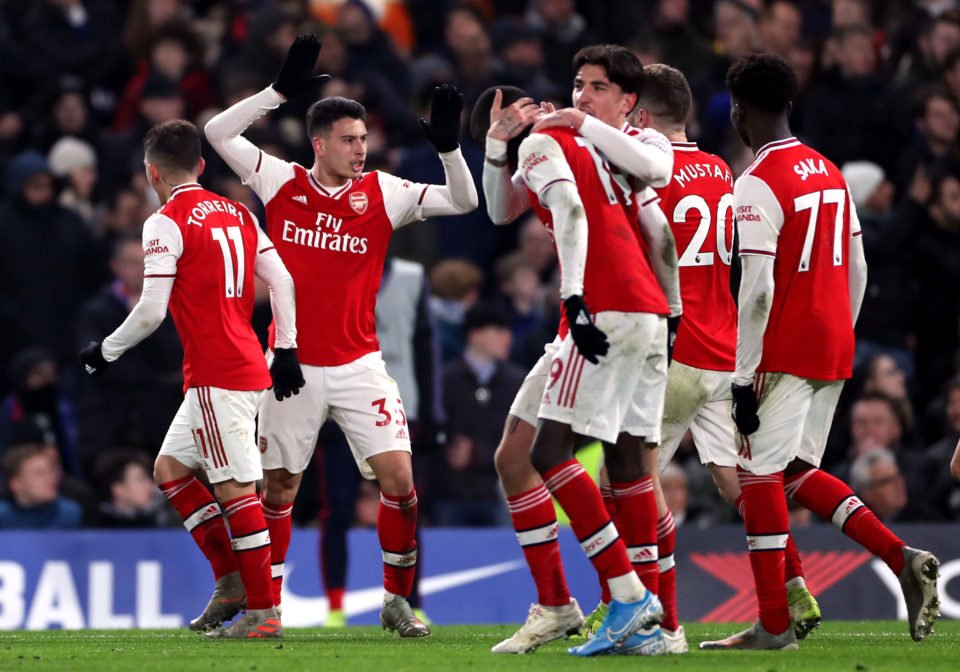 Chelsea were held to 2-2 draw by 10-man Arsenal on Tuesday as the visitors recovered from the first-half sending off of defender David Luiz to twice peg back the Blues in a pulsating London derby.

Chelsea started on the front foot and went ahead with a penalty by Jorginho in the 28th minute when Tammy Abraham pounced on a misplaced back pass by Arsenal defender Shkodran Mustafi and was brought down by former Blues defender Luiz.

The Brazilian was shown a red card by referee Stuart Attwell before Jorginho stroked home from the spot.

But the hosts, who have struggled to score in recent matches, once again failed to capitalise on their possession and they paid for it in the 63rd minute when Gabriel Martinelli set off on a run from deep in his own half. He skipped past N’Golo Kante as the French midfielder slipped and fired past the advancing Chelsea goalkeeper Kepa Arrizabalaga.

Chelsea captain Cesar Azpilicueta stabbed home a cross by Hudson-Odoi in the 84th minute but Arsenal refused to give up and their captain Hector Bellerin scored three minutes later with a curling low shot.

The result left Chelsea in fourth place, six points ahead of Manchester United and Wolverhampton Wanderers who have both played a game less. Arsenal remain in 10th place, 10 points behind Chelsea.

Manchester City’s Sergio Aguero came off the bench to grab a 73rd-minute winner as they solidified their grip on second place in the Premier League with a hard-fought 1-0 win at Sheffield United on Tuesday.

City’s Brazilian Gabriel Jesus had a first-half penalty saved by Dean Henderson and the keeper, on loan from Manchester United, also produced a fine save to keep out a Raheem Sterling effort.

Aguero was sent on to replace Jesus in the 67th minute and it did not take long for him to make an impact as his perfectly-timed run into the box was picked out immaculately by Kevin De Bruyne, leaving the Argentine with a simple tap-in.

City had defender Aymeric Laporte back in their line-up for the first time since he suffered a knee injury in August. The Frenchman was replaced 12 minutes from fulltime.

Pep Guardiola’s side are on 51 points, 13 behind leaders Liverpool, who have two games in hand, and six points ahead of third-placed Leicester, who host West Ham United on Wednesday.

Striker Moise Kean finally opened his Everton account with his first goal for the club but Newcastle United scored twice in stoppage time to snatch a 2-2 draw at Goodison Park on Tuesday.

The 19-year-old, making his 22nd appearance since a 27.5 million euros ($30.5 million) move from Juventus, celebrated wildly in front of the Goodison Park faithful when firing home after 30 minutes.

Southampton made sure there was no repeat of their weekend collapse against Wolverhampton Wanderers as they claimed an impressive 2-0 win at Crystal Palace on Tuesday.

Ralph Hasenhuttl’s side let slip a two-goal lead to lose 3-2 on Saturday but remained in control at Selhurst Park after superb goals by Nathan Redmond and Stuart Armstrong.

Redmond smashed home in the 22nd minute when he was played in behind the Palace defence by Jack Stephens.

Southampton doubled their lead when Armstrong whipped in a curling effort after 48 minutes.

Palace huffed and puffed in response but Saints held firm to move a place and a point above their hosts into ninth on 31 from 24 games.

Harry Wilson and Callum Wilson both got on the scoresheet for goal-shy Bournemouth as they ended their four-game Premier League losing streak with an emphatic 3-1 win over Brighton & Hove Albion on Tuesday.

Aston Villa scored with almost the last kick of the game to seal a 2-1 comeback win over Watford at Villa Park on Tuesday that lifted Dean Smith’s men out of the Premier League relegation zone – and dumped Nigel Pearson’s men back in it.