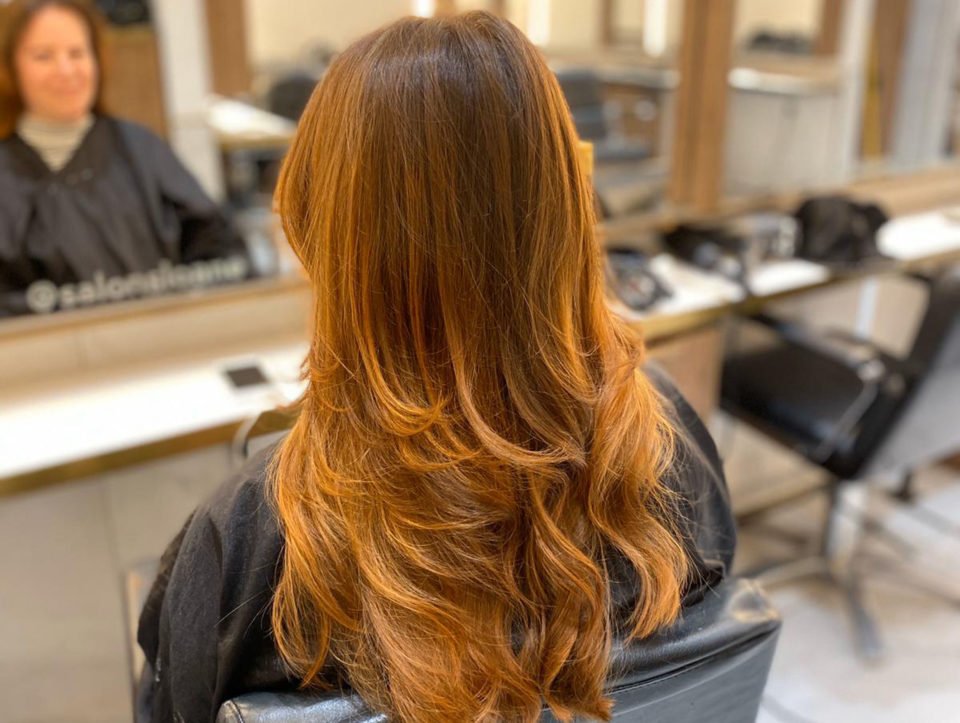 It’s a cliche we know all too well; you feel a bit restless, and decide you’re in need of a new look. So, you book a hairdresser’s appointment.

That’s how, after a few years of being a brunette (my natural hair colour), I ended up trying out being a redhead.

The issue is, I’ve had some dodgy experiences in the past with dyeing my hair. In one particularly scarring memory, I bought an at-home colouring kit, with the hope of going a rich mahogany.

Instead, it went way darker than I anticipated, and I ended up looking like a goth – and with embarrassingly uneven coverage.

So, I had my reservations – my biggest fear being that the shake-up simply wouldn’t suit me, and I’d pine for my old colour. Plus, going to a salon can feel quite intimidating.

However, I was put at ease by Ben Smith, a colourist at Salon Sloane.

Taking a photo in of the kind of colour you like, as he suggested, definitely helps. Together, we discussed the sorts of tones that would, and wouldn’t, suit me.

There would be no all-over luminous orange, he said, but instead, soft coppery tones – maybe three or four different colours mixed together.

The top of my hair would be dyed a shade darker than my natural base, just to give it an oomph, then he’d go all out with the copper tones on the ends.

The end result gives my hair a new and glossy lease of life. It’s a subtle change, but it’s given me a confidence boost, nonetheless.

And, because it’s low maintenance (ideal for someone like me who doesn’t want to spend a lot of time on styling) I plan on sticking with these warmer tones for the foreseeable future.

Tempted to become a redhead too? Here are five things you need to consider before taking the plunge…

You don’t have to opt for one shade

Smith decided he would use balayage. A French word meaning ‘sweeping’, the popular technique involves free-hand painting highlights onto the hair, to create a soft and natural gradation of lightness towards the ends.

“It’s quite pretty – when you’ve got your hair tied up, and it’s all messy and kinky, to have it natural around your eyes, and then you have these bits [at the end] where it’s quite coppery and light,” he explains.

“You can use the lightness that’s already in there – some people’s hair naturally goes lighter as it grows.”

Choose a shade to match your skin and eye colour

“If you’ve got olive skin, and you go for the wrong sort of red, it just doesn’t work,” says Smith, because “people with natural ginger hair are generally more pale, or have a bit more flush in their skin – maybe pink cheeks.

“Eye colour definitely plays a part, but it’s not as important as skin tone.

“You don’t look at someone and go, ‘That colour makes their eyes look bad’, but you could look at them and go, ‘that really washes you out’.

So, it’s important to talk to your colourist and take their advice on the best shade of red for you.

Rather than diving head first into permanent red, you might want to try a temporary colour that lasts around six weeks.

“It’s only then, if you decide, ‘I actually love it’, we would be like, ‘OK, we will go for a more high-maintenance version’,” says Smith.

“The great thing is, once the colour fades, you’ll just be left with sun-kissed hair. It’s a really beautiful look, that’s going to stay there for a long time, which is amazing.”

Ask your colourist about maintenance

Different shades of red require different levels of upkeep, with fading being the main issue for redheads, but it’s possible to refresh the colour in between dyeing appointments.

“You could have easy glosses to maintain and keep that coppery feeling without having to come in every four weeks for your roots,” Smith explains.

“If you’ve got a big night out, and you want to change your look – you’re wearing a green dress or whatever and you want to go copper – you could come in and I’ll do a gloss that will last a few weeks and look really vibrant.”

Take your time with the dyeing decision

“It’s about finding a colourist that connects with you,” says Smith, so don’t feel like you have to say yes if you don’t feel comfortable at your consultation.

“Sometimes, in consultations, your personalities don’t click. If the creative process isn’t working, go and get a second opinion.”

‘Happiness is subjective and it is different for everybody’