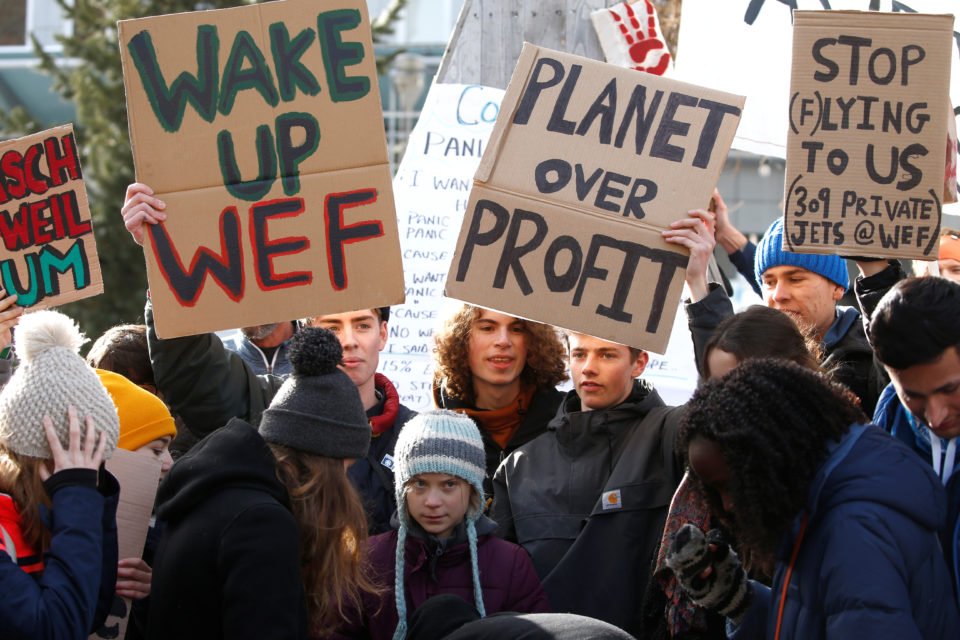 If making headlines and drawing flak is a measure of success at Davos, then Greta Thunberg probably came out on top of this year’s edition of the Alpine business-meets-politics gathering.

The 17-year-old climate activist has already attended the World Economic Forum twice. She and her team have shown themselves adept at shaping the debate, even managing to turn criticism from the US treasury secretary to her advantage.

This year’s programme was weighted towards discussion of the climate crisis, partly reflecting Thunberg’s rising global influence as well as the deepening concerns of big business.

As the summit wrapped up on Friday, Thunberg lead a protest with young people in the centre of Davos, flagging her message to the end, after most world leaders had left.

With European Commission President Ursula von der Leyen focusing her address on the EU’s ‘Green Deal’ – a plan to make Europe carbon-neutral by 2050 – and Britain’s Prince Charles adding his voice to calls for urgent action, combating global warming was kept at the top of the agenda.

US President Donald Trump used his headline speech on Tuesday to criticise “prophets of doom” over climate fears, but his views were largely drowned out by the end of the week.

There were even signs of Trump shifting in his attitude towards the Swedish teenager, who was joined in the ski resort by a dozen other young activists from as far afield as Bali, Zambia and Puerto Rico, including 13-year-old American anti-gun campaigner Naomi Wadler.

Whereas in the past Trump has told Thunberg she needs “anger management”, when he left Davos on Wednesday he told reporters he “would have loved” to hear her speak. Asked if he thought climate change was still a hoax he replied, “No, not at all”.

In a further sign the U.S. president may want to keep his mind open on climate issues in an election year, business leaders who met him for breakfast directly addressed the topic.

When asked if he had been responsible for convincing Trump to sign up to an initiative to plant one trillion trees, Salesforce chief executive Marc Benioff acknowledged a key role.

“It’s fair. More than fair. But I just don’t want to be the one taking credit,” he told Reuters on Friday.

The CEO of Siemens said he had told Trump he needed to start listening to young activists.

Meanwhile, both Dutch Prime Minister Mark Rutte and the European Commission’s climate chief, Frans Timmermans, said they detected hints that the Trump administration was coming round on the climate, in part because of concerns raised by business and shifting voter attitudes.

“A sensible politician looking for reelection would, of course, look with a lot of interest at these types of (climate-oriented) policies,” Rutte told Reuters.

“In my experience with Donald Trump he is a very practical politician — he wants to do good stuff for his country.”

The strongest criticism of Thunberg, in fact, came not from Trump but from his treasury secretary, Steve Mnuchin.

Asked about Thunberg’s previous calls to divest from fossil fuels, Mnuchin told a news briefing: “Is she the chief economist? I’m confused … After she goes and studies economics in college, she can come back and explain that to us.”

But the remark quickly backfired as Thunberg responded on Twitter, saying it did not take a degree to know the world was not meeting its climate goals.

“So either you tell us how to achieve this mitigation or explain to future generations and those already affected by the climate emergency why we should abandon our climate commitments,” she wrote, a riposte that quickly gained more attention than Mnuchin’s criticism.