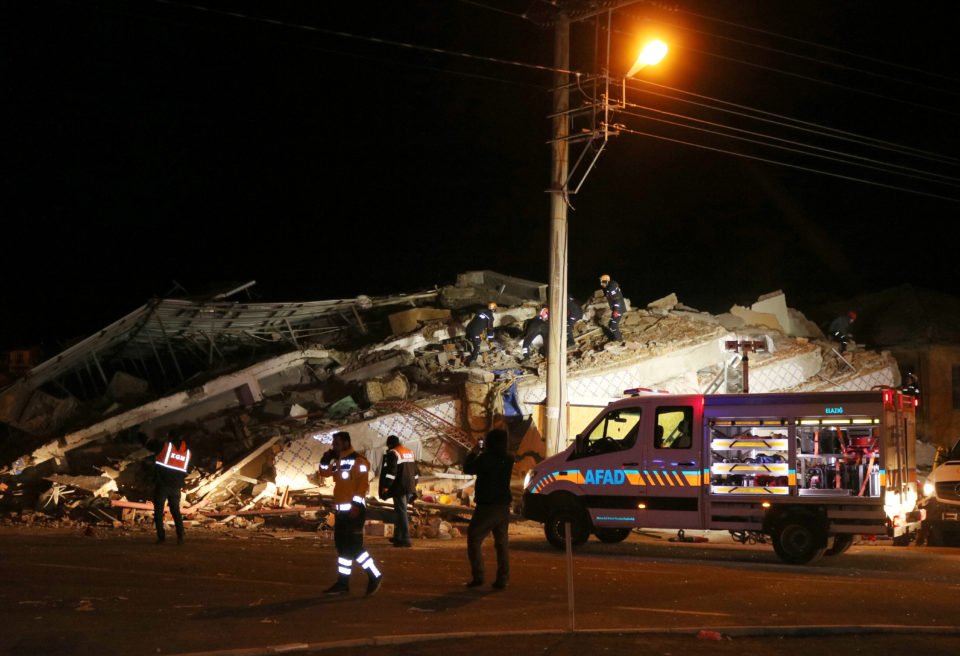 Rescuers work on a collapsed building after an earthquake in Elazig province, Turkey.

The death toll from a powerful earthquake in eastern Turkey reached 22 on Saturday, as rescuers searched for survivors trapped under the rubble of collapsed buildings.

The magnitude 6.8 quake late Friday shook Elazig province, about 550 km (340 miles) east of the capital Ankara, and was followed by more than 390 aftershocks, 14 of which had magnitudes over 4.

Eighteen people were killed in Elazig and four more in the neighbouring province of Malatya, said Turkey’s Disaster and Emergency Authority (AFAD), adding 1,103 others were injured and in hospitals in the region. It said rescue efforts were underway at three different sites in Elazig.

Turkish broadcasters showed footage of rescuers pulling people out from under the debris, some around 17 hours after the quake.

Speaking alongside Soylu, Health Minster Fahrettin Koca said 128 wounded people were receiving treatment and that 34 of those were in intensive care, but not in critical conditions. He said additional medical centres would be set up if necessary.

Rescue teams worked through the night with their hands, drills and mechanical diggers to remove bricks and plaster from collapsed buildings in Elazig, where the overnight temperature dipped to -8 degrees Celsius.

“Our houses collapsed … we cannot go inside them,” said a 32-year-old man from the town of Sivrice, epicentre of the quake which struck shortly before 9 p.m. (1800 GMT).

“In our village some people lost their lives. I hope God will help us,” said the man, who gave only his first name, Sinasi. “Our animals died. Our families gathered around the fire to spend the night, covered with blankets,” Sinasi said as he and a relative tried to warm themselves by a small fire.

State media said on Saturday President Tayyip Erdogan had cancelled his plans in Istanbul and would travel to Elazig.

State media in Syria and Iran both reported the earthquake was felt in those countries. Local media in Lebanon said the cities of Beirut and Tripoli also felt the quake.

On Friday night, Soylu described it as a “Level 3” incident according to the country’s emergency response plan, meaning it called for a national response but did not require international help.

He said Turkey, which straddles seismic faultlines and is prone to earthquakes, had learnt lessons from previous disasters which helped it address Friday’s incident. Drones were deployed in search operations and to communicate between provinces.

Emergency teams and rescue equipment were sent from other provinces to Elazig, with thousands of rescuers and medical personnel on the ground to look for and help survivors. Flag-carrier Turkish Airlines started additional flights to Elazig from Ankara and Istanbul to help transport rescuers.

AFAD warned residents not to return to damaged buildings because of the danger of further aftershocks. It said beds, blankets and tents were being sent to the area, where some people sheltered in sports gymnasiums. Turkey’s Kizilay aid group also sent food, heaters and other materials to the region.

“I wish God’s mercy to our brothers who lost their lives in the earthquake, and urgent healing for those who were injured,” Erdogan said on Twitter on Friday.

Environment and Urbanisation Minister Murat Kurum, who spoke alongside Soylu on Saturday, said five buildings in Elazig had collapsed in the quake and there were several heavily damaged structures.

Soylu also said on Saturday a prison in the nearby Adiyaman province was being evacuated due to damage to the building. Justice Minister Abdulhamit Gul said the inmates were being transferred to prisons in three nearby provinces.

Turkey has a history of powerful earthquakes. More than 17,000 people were killed in August 1999 when a 7.6 magnitude quake struck the western city of Izmit, 90 km (55 miles) southeast of Istanbul. About 500,000 people were made homeless.