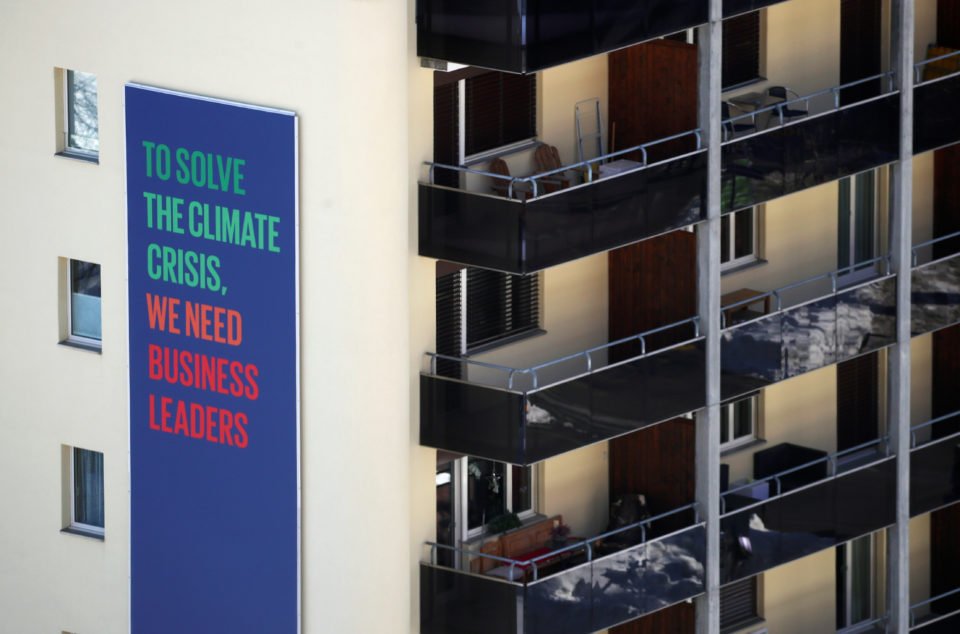 A billboard is seen near the Davos Congress Centre, where the 50th World Economic Forum (WEF) annual meeting takes place, in Davos

In Davos on Tuesday, President Donald Trump pledged the United States to a major global project to plant a trillion trees worldwide in the next decade. In almost any previous administration, that announcement would have been the centrepiece of the president’s speech to the World Economic Forum, focusing this year on climate change amid Australia’s wildfires and faster than expected progress towards renewable energy generation.

Instead, Trump grabbed the agenda in a very different way, lambasting climate change campaigners as “prophets of doom” making “predictions of apocalypse” and pledging that America would defend its economy. Like almost every other major action the president takes this year, it paints an unambiguous picture of both how he sees the world and intends to use that framing to win a second term.

It is, as always, an unambiguously divisive approach that Trump knows will antagonize his rivals and, he hopes, mobilise his base. That, he clearly feels, is best done by going on the offensive. Liberal outrage and alarm over draconian measures against migrants, trade wars or risky foreign actions such as the killing of Iranian Major-General Qassem Soleimani, Trump appears to be betting, may simply play into his hands with the demographics that he really needs.

He will hope the same will be true of slamming hardline climate campaigners like Greta Thunberg, whom he did not mention by name but who was in the auditorium to hear him speak. Climate change is rising up the priority list for US voters – one poll by Yale and George Mason University climate change departments in May showed as many as 40 per cent saying it might influence their choices. But those voters, of course, remain amongst the least likely to embrace Trump.

Strikingly, he painted the pledge to contribute to the trillion trees – a project of the World Economic Forum supported by the UN Environment Program and the Food and Agriculture Organisation – as “conserving the majesty of God’s creation”. Evangelical Christian voters are at the heart of Trump’s strategy, whatever his personal faith, an approach that has underpinned embracing sometimes controversial preachers and appointing judges keen to roll back access to abortion.

The next major global climate summit will be in Glasgow in November – less than a week after the US presidential election on the 3rd of that month. For Trump, that likely means doubling down on this kind of rhetoric.

Globally, on climate at least, sentiment appears to be shifting – with high-profile extreme weather events such as the Australian bushfires potentially providing a political turning point even in traditionally sceptical countries. Last year’s “yellow vest” protests in France, however, remain a potent reminder of public resistance to efforts to change behaviour through steps like fuel tariffs. “These alarmists always demand the same thing – absolute power to dominate, transform and control every aspect of our lives,” said Trump.

Intriguingly, though, support for action to lower greenhouse gas emissions turns out to be more widespread than believing in the underlying science: 76 per cent of voters say they believe emissions should be cut regardless of what other countries do, while 77 per cent told pollsters they thought Trump was wrong to quit the Paris Climate Agreement. As before, those results are heavily partisan, with liberal Democrats hugely more likely than conservative Republicans to back anti-climate action.

NOT A HOAX, NOT AN EMERGENCY?

An October focus group in the key swing states of Ohio, Minnesota and Wisconsin reported by news website Axios provides a more nuanced view. By and large, those involved believe climate change is a genuine concern, certainly not a hoax. But they also did not feel that it was a genuine emergency requiring radical action.

Like so much in the modern world, this is a global as much as a national political dividing point. Ahead of the Glasgow climate summit, the United Nations, most major Western governments and increasingly multinational firms are on a very similar page. Investment bank Goldman Sachs announced this year it was getting out of investments it judged to be contributing to climate change, while a tsunami of investment stands ready to pour into renewable energy and associated projects as the technology becomes available.

Already, the International Energy Agency says renewable energy generation is growing faster than expected – making up 26 per cent of the total world production – and could expand by 50 per cent in the next five years, powered by growth in solar energy in particular. Costs of the latter are predicted to fall 15-35 per cent by 2024 – but emerging economies, particular China, will remain heavily dependent on coal while the green industrial revolution could prove devastating to energy producing states such as Russia and Saudi Arabia.

If predictions that the world is reaching a tipping point in climate change, ushering in more Australia-style extreme events, that may be enough to win the international argument, even amongst Trump-supporting rural dwellers who distrust the concept now.

But that may not bother Trump. He is focused on November.