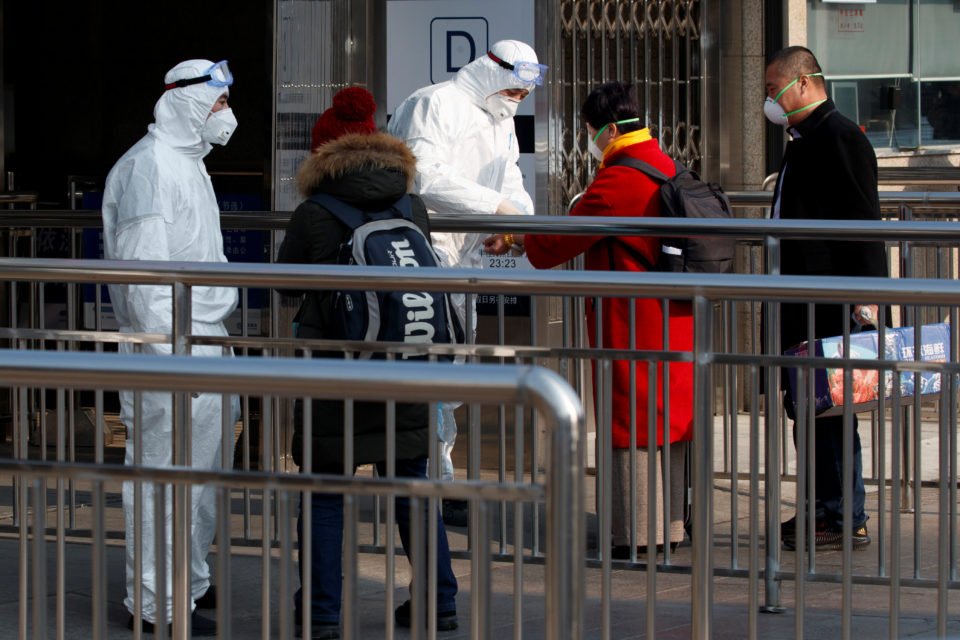 Workers take the body temperature of passengers before they enter the subway station outside the Beijing Railway Station in central Beijing, January 25, 2020. REUTERS/Thomas Peter

The death toll from China’s coronavirus outbreak jumped on Saturday to 41 from 26 a day earlier as the Lunar New Year got off to a gloomy start, with authorities curbing travel and cancelling public gatherings.

More than 1,300 people have been infected globally with a virus traced to a seafood market in the central city of Wuhan that was illegally selling wildlife. Health authorities around the world are scrambling to prevent a pandemic.

State-run China Global Television Network reported in a tweet on Saturday that a doctor who had been treating patients in Wuhan, 62-year-old Liang Wudong, had died from the virus.

It was not immediately clear if his death was already counted in the official toll of 41, of which 39 were in the central province of Hubei, where Wuhan is located.

U.S. coffee chain Starbucks said on Saturday that it was closing all its outlets in Hubei province for the week-long Lunar New Year holiday, following a similar move by McDonald’s in five Hubei cities.

Wuhan, a city of 11 million, has been in virtual lockdown since Thursday, with nearly all flights at the airport cancelled and checkpoints blocking the main roads leading out of town. Authorities have since imposed transport restrictions on nearly all of Hubei province, which has a population of 59 million.

In Beijing on Saturday, workers in white protective suits checked temperatures of passengers entering the subway at the central railway station, while some train services in eastern China’s Yangtze River Delta region were suspended, the local railway operator said.

The number of confirmed cases in China stands at 1,287, the National Health Commission said on Saturday.

Australia on Saturday announced its first case of coronavirus, a Chinese national in his 50s, who had been in Wuhan and arrived from China on Jan. 19 on a flight from Guangzhou. He is in stable condition in a Melbourne hospital.

“Given the number of cases that have been found outside of China and the significant traffic from Wuhan city in the past to Australia, it was not unexpected that we would get some cases,” Australia’s Chief Medical Officer Brendan Murphy told a news conference.

“This is the first confirmed case. There are other cases being tested each day, many of them are negative, but I wouldn’t be surprised if we had further confirmed cases.”

The U.S. Centers for Disease Control and Prevention said on Friday it had 63 patients under investigation, with two confirmed cases, both in people who had travelled to Wuhan.

The World Health Organization (WHO) declared the new coronavirus an “emergency in China” this week but stopped short of declaring it of international concern.

Human-to-human transmission has been observed in the virus.

Hubei province, where authorities are rushing to build a 1,000 bed hospital in six days to treat patients, announced on Saturday that there were 658 patients affected by the virus in treatment, 57 of whom were critically ill.

The newly-identified coronavirus has created alarm because there are still many unknowns surrounding it, such as how dangerous it is and how easily it spreads between people. It can cause pneumonia, which has been deadly in some cases.

Symptoms include fever, difficulty breathing and coughing. Most of the fatalities have been in elderly patients, many with pre-existing conditions, the WHO said.

Airports around the world have stepped up screening of passengers from China, though some health officials and experts have questioned the effectiveness of such screenings and of the lockdown.

Health officials fear the transmission rate could accelerate as hundreds of millions of Chinese travel before and during the week-long Lunar New Year holiday, which began on Saturday, although many have cancelled their plans, with airlines and railways in China providing free refunds.

The virus outbreak and efforts to contain it have put a dampener on what is ordinarily a festive time of year.

Shanghai Disneyland was closed from Saturday. The theme park has a 100,000 daily capacity and sold out during last year’s Lunar New Year holiday.

Beijing’s Lama Temple, where people traditionally make offerings for the new year, has also closed, as have some other temples and the Forbidden City, the capital’s most famous tourist attraction. Sections of the Great Wall near the capital were also closed off.

Film premieres have been postponed.

What we know so far

* There were 1,287 confirmed cases and 41 people had died in China as of Jan. 24, Chinese state media reported.

* China is to take stricter and more targeted measures to curb the spread, state television reported.

* The previously unknown strain is believed to have emerged late last year from illegally traded wildlife at an animal market in Wuhan.

* The WHO said that while the outbreak was an emergency for China, it was not yet a global health emergency.

* China says the virus is mutating and can be transmitted through human contact.

* Those most affected are older people and those with underlying health conditions.

* Scientists hope to be testing the first possible vaccines in three months’ time.

* Wuhan, a city of 11 million, is under severe travel restrictions, with urban transport shut and outgoing flights suspended.

* China has advised people to avoid crowds and 10 cities in the central province of Hubei, where Wuhan is located, have suspended some transport.

* Airports around the world have stepped up screening.

* Shares and crude prices fell sharply on Friday as investors moved into safe-haven assets amid concerns that the virus would curb travel and hurt economic demand.