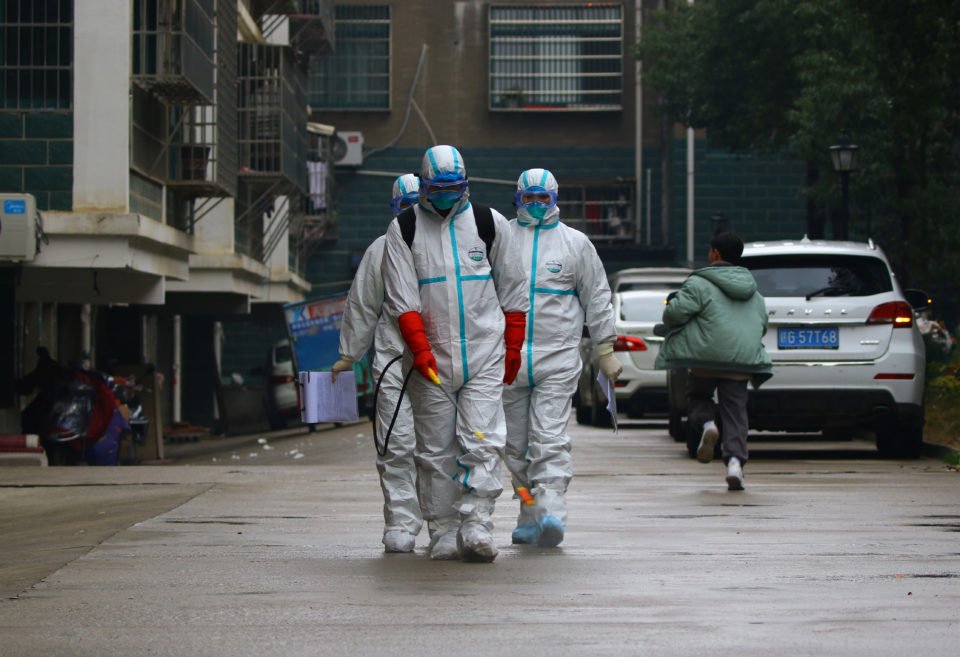 Workers from local disease control and prevention department in protective suits disinfect a residential area following the outbreak of a new coronavirus, in Ruichang, Jiangxi province

The ability of the new coronavirus to spread is strengthening and infections could continue to rise, China’s National Health Commission said on Sunday, with more than 2,000 people in China infected and 56 killed by the disease.

Health authorities around the world are racing to prevent a pandemic after a handful of cases of infection were reported outside China, including in Thailand, Australia, the United States and France.

The mayor of Wuhan, the epicentre of the outbreak, said he expected another 1,000 new patients in the city, which was stepping up construction of special hospitals.

The newly identified coronavirus has created alarm because much about it is still unknown, such as how dangerous it is and how easily it spreads between people. It can cause pneumonia, which has been deadly in some cases.

China’s National Health Commission Minister Ma Xiaowei said the incubation period for the virus can range from one to 14 days, during which infection can occur, which was not the case with Severe Acute Respiratory Syndrome (SARS).

SARS was a coronavirus that originated in China and killed nearly 800 people globally in 2002 and 2003.

“According to recent clinical information, the virus’ ability to spread seems to be getting somewhat stronger,” Ma told reporters.

The Lunar New Year holiday, traditionally celebrated by hundreds of millions of Chinese travelling around the country and abroad to see family, began on Friday but has been severely disrupted by the outbreak.

Ma said China would intensify its containment efforts, which have so far included transportation and travel curbs and the cancellation of big events.

The virus, believed to have originated late last year in a seafood market in Wuhan that was illegally selling wildlife, has spread to cities including Beijing and Shanghai. Hong Kong has six confirmed cases.

The World Health Organisation this week stopped short of calling the outbreak a global health emergency, but some health experts question whether China can contain the epidemic.

Health officials in Orange County, California, reported that a third case had been registered in the United States in a traveller from Wuhan, who was in isolation and in good condition.

On Saturday, Canada declared a first “presumptive” confirmed case in a resident who had returned from Wuhan. Australia confirmed its first four cases.

No fatalities have been reported outside China.

On Sunday, China temporarily banned nationwide the sale of wildlife in markets, restaurants, and e-commerce platforms. Wild and often poached animals packed together in Chinese markets are blamed as incubators for viruses to evolve and jump the species barrier to humans.

Snakes, peacocks, crocodiles and other species can also be found for sale via Taobao, an e-commerce website run by Alibaba.

The U.S. State Department said it will relocate personnel at its Wuhan consulate to the United States, while Japanese Prime Minister Shinzo Abe said his government was working with China to arrange a charter flight for Japanese nationals to return from Wuhan.

The outbreak has prompted widening curbs on movements within China, with Wuhan, a city of 11 million, on virtual lockdown and transport links all-but severed except for emergency vehicles.

Health authorities in Beijing urged people not to shake hands but instead salute using a traditional cupped-hand gesture. The advice was sent in a text message that went out to mobile phone users in the city on Sunday morning.

China has called for transparency in managing the crisis, after a cover-up of the spread of the SARS virus eroded public trust, but officials in Wuhan have been criticised for their handling of the current outbreak.

“People in my hometown all suspect the real infected patients number given by authorities,” said Violet Li, who lives in the Wuhan district where the seafood market is located.

Illustrating the extend of disruption to life in China, overall passenger travel declined by nearly 29% on Saturday, the first day of the Lunar New Year, from a year earlier, with air passengers down nearly 42%, a transportation ministry official said.

Many cinemas across China were closed with major film premieres postponed.

Cruise operators including Royal Caribbean Cruises, and Costa Cruises said they had cancelled a combined 12 cruises that had been scheduled to embark from Chinese ports before Feb. 2.

Hong Kong Disneyland and the city’s Ocean Park were closed on Sunday. Shanghai Disneyland, which expected 100,000 visitors daily through the holiday period, has already closed.

Airports around the world have stepped up screening of passengers from China, although some health officials and experts have questioned the effectiveness of these efforts.