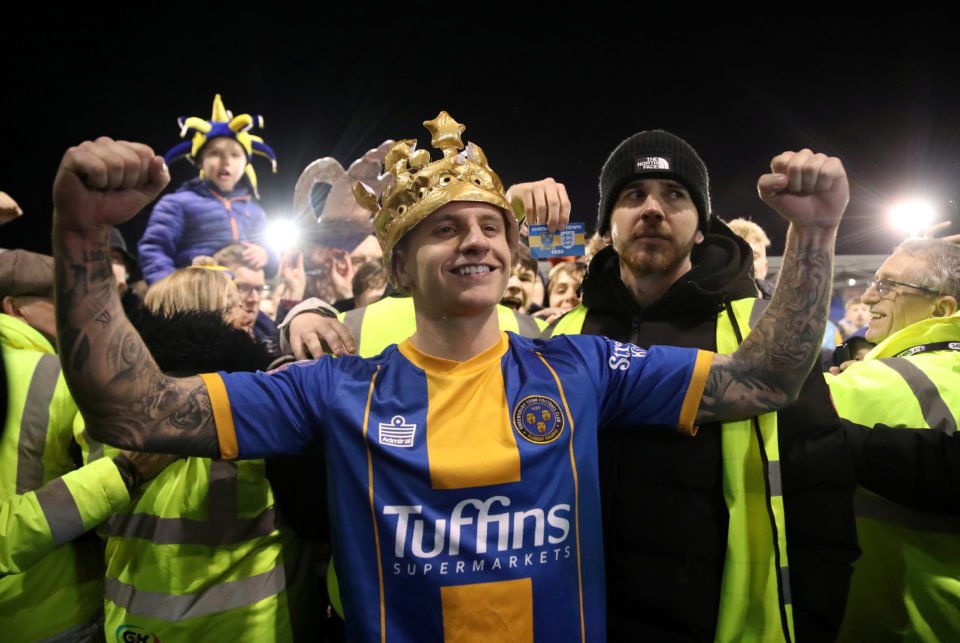 Shrewsbury Town's Jason Cummings wears a crown after the match

Premier League leaders Liverpool were given a huge scare by third-tier Shrewsbury Town as they squandered a two-goal lead to draw 2-2 away in a pulsating FA Cup fourth round tie on Sunday.

A much-changed Liverpool appeared to be cruising into the fifth round for the first time since Juergen Klopp took over in 2015, but Shrewsbury substitute Jason Cummins had the compact New Meadow stadium rocking with a memorable brace.

First he coolly tucked away a 65th-minute penalty and then he outpaced Liverpool’s nervy back four to beat Adrian with a cool right-foot finish from the edge of the area.

Liverpool, who have been untouchable in the Premier League this season making a first title for 30 years almost inevitable, took the lead through teenager Curtis Jones after 15 minutes.

The seven-time Cup winners doubled their lead 28 seconds after halftime when Shrewsbury’s Donald Love scored an own goal.

But European and world club champion Liverpool lost concentration and were punished as Shrewsbury roared back to set up a thrilling climax and earn a replay at Anfield.

Holders Manchester City served up an attacking masterclass as they thrashed 10-man Fulham 4-0 in the FA Cup fourth round on Sunday, with Gabriel Jesus scoring twice within three second-half minutes.

Any hopes of Championship side Fulham causing an upset at the Etihad Stadium were dented in less than six minutes after captain Tim Ream received his marching orders for dragging down Jesus inside the box.

Germany midfielder Ilkay Gundogan converted the resulting penalty for his fifth City goal of the campaign, before Bernardo Silva made it 2-0 for the hosts.

Phil Foden slid the ball across the edge of the box to Silva, who made a sharp turn before driving the ball past Fulham keeper Marek Rodak into the bottom right corner.

City continued to carve open Fulham in the second half, with substitute Raheem Sterling striking the crossbar from close range on the hour mark.

The game was eventually put to bed by Brazilian striker Jesus, who scored two headed goals in quick succession to take his tally to 16 goals across all competitions this season.

Manchester United thrashed third-tier Tranmere Rovers 6-0 on Sunday to join Manchester City in the fifth round of the FA Cup.

Tranmere Rovers 0 Man, Utd A muddy and bobbly Prenton Park pitch looked the perfect stage for a shock but Tranmere were blown away as Harry Maguire’s early thunderbolt settled any United jitters.

Tranmere had knocked out Premier League Watford in a replay on Thursday but apart from an early flurry of pressure they were never in Sunday’s tie as United scored five times before the break.

Diogo Dalot, who like Maguire had not scored all season, made it 2-0 after weaving into the penalty area and delivering a fierce finish before Jesse Lingard curled a right-footed shot inside the post for only his second goal of the season.

Phil Jones got in on the act with a looping header from a corner, ending his own near six-year goal drought, before Anthony Martial added a fifth goal just before the break.

It was the first time since 2001 that United had scored five before halftime and they continued the onslaught after the break when Mason Greenwood converted a 56th-minute penalty.

Earlier, holders Manchester City beat Championship side Fulham 4-0 — a task made easier as Fulham played virtually the whole game with 10 men after Tim Ream was red-carded for conceding a penalty converted by Ilkay Gundogan.

Bernardo Silva made it 2-0 and Gabriel Jesus scored twice after the break as City reached 100 goals for the season in all competitions, the first club to do so in Europe’s top leagues.