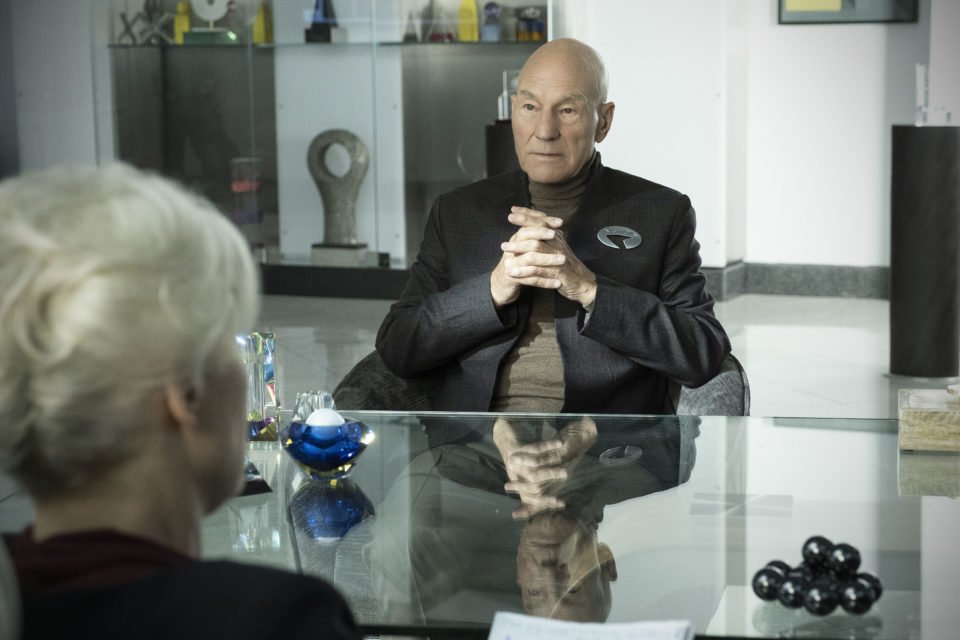 SIR Patrick Stewart’s career may have spanned seven decades but there is one role he is synonymous with.

Star Trek’s Jean-Luc Picard, a loyal, enthusiastic, kind leader – not dissimilar from the actor himself, who’s what you would describe as a real gentleman.

It’s been 18 years since we last saw the 79-year-old, who was born in West Yorkshire, on screen as Picard, in film Star Trek: Nemesis.

But now he’s reprising the iconic character for new 10-part series, Star Trek: Picard, which is available to stream on Amazon Prime Video.

Having played the captain of the starship USS Enterprise for seven seasons of Star Trek: The Next Generation, the part is second nature for Sir Patrick.

“There was a point, certainly I think by halfway through the second season of Next Generation, that I began to realise that I didn’t quite know where Patrick left off and Jean-Luc began, that we had merged.

“And I was comfortable with that, because I didn’t have to sit and brood who the man was and what he’d had for breakfast, to play a scene on the Enterprise.”

The sci-fi drama (which is produced by CBS Television Studios, and has already been renewed for a second series) follows Jean-Luc into the next chapter of his life.

In the first episode, it’s the end of the 24th Century, 14 years since he retired from Starfleet.

Still deeply affected by the loss of Lieutenant Commander Data and the destruction of Romulus, he is living a quiet life on his vineyard.

But then he is sought out by a mysterious young woman, Dahj (Isa Briones), in need of his help – and it’s not long before he realises she may have personal connections to his own past.

The show is certainly a dream come true for hardcore fans (known as Trekkies).

But when it came to getting Stewart on board, the writers and producers – including Alex Kurtzman, Akiva Goldsman, Michael Chabon and Kirsten Beyer – had a tough job on their hands at first.

“For many years, any suggestion that I might revive it in different formats and contexts, I passed on immediately, straight away, without hesitation,” admits Stewart, who’s also famous for the X-Men film series.

“Not because I wasn’t proud of what we did on Next Generation – I was, and I loved all the people I worked with very much. But, I thought I’d said and done everything that could be said and done about Jean-Luc and the Enterprise and his relationship with the crew.

“But when I found myself sitting in front of Akiva and Alex and Kirsten and James Duff, they at once began to talk about the new series in a way that was unexpected.”

However, he still made a long speech in which he turned the role down, “which took them by surprise”.

The determined creative team didn’t give up though. More talks ensued and they went into more detail about the storyline.

It was this that won their lead star round.

“I asked my agent if he would contact them and have them put in writing all the things they’d said. And, two days later, I got 35 pages of pitch.”

He continues sincerely: “It was undeniably interesting, and it was not going to be what I had experienced previously; a different world, which appealed to me, because the world is different in the last 19 years.

“I thought that they were addressing the world and the condition that we’re in at the moment – because it’s bad. It’s really bad.

“And I’m all for that, I’ve always been very active. And so, if we can give little nudges to what we all believe about what’s going on…”

Stewart is well known for speaking his mind about politics. Just last week at the premiere of Star Trek: Picard in London, the Remain campaigner and supporter of the People’s Vote campaign described Brexit as “the grimmest thing” to have happened to him in his political life.

And while he suggests they’re “not hammering anything home”, it’s clear the script relates to real-life, reflecting society in the present day.

“What I liked about the proposal that Alex and the team made was that the world of the federation had changed, and was no longer the secure, trustworthy, reliable place that it had been, that there were other interests and so forth.

“And that was one of the major things that convinced me that I should look seriously at reviving this.”

He worked as co-executive producer on the series, and “to be sitting in the writers’ room with Akiva Goldsman and Michael Chabon is an extraordinary experience”.

“To hear their ideas flash backwards and forwards and then be abandoned and then another one take place was thrilling.”

Seeing as one of the themes of the series is trust, who can Stewart trust nowadays?

“There are individuals that I believe in,” he notes. “For instance, I believe in David Miliband, who is now running the International Rescue Committee from New York – and ought really to be running the UK. But you know what happened there…

“There are some of the contenders for the American presidency who I have great respect for,” he adds. “Though I also have profound anxiety that it’s not going to turn out the way I would like it to turn out.”

Well, regardless of the issues facing us in the real world, people will always be able to find comfort in watching their favourite telly shows.

And Jean-Luc is an example of a beloved character who has inspired people greatly in their personal lives, as Stewart is very much aware.

“The most affecting communication I ever had was from a police sergeant in the Las Vegas police force, who wrote me quite a long letter about his life as a policeman, and how much he loved the job and he had always wanted to be in the police,” he recalls.

“But, he said, ‘There are days when I come home when what I’ve seen and heard and witnessed is so unpleasant, I feel at times close to despair. And when I feel that I go to my shelf and I take down a tape of Next Generation and my hope returns’, which was lovely.”