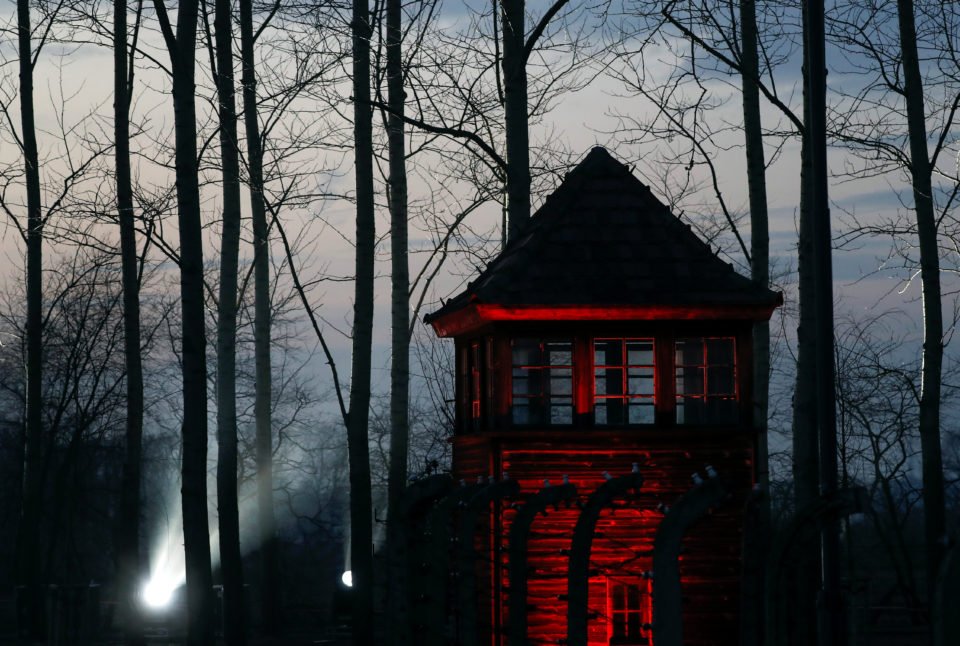 A watch tower is illuminated at the former Nazi German concentration and extermination camp Auschwitz II-Birkenau, during ceremonies marking the 75th anniversary of the liberation of the camp and International Holocaust Victims Remembrance Day, in Brzezinka near Oswiecim, Poland, January 27, 2020. REUTERS/Aleksandra Szmigiel

The presidents of Israel and Poland called on Monday for greater efforts to combat anti-Semitism as the world marked 75 years since the liberation of the Auschwitz death camp amid concerns over a global resurgence of anti-Jewish prejudice.

More than 1.1 million people, most of them Jews, perished in the camp’s gas chambers or from starvation, cold and disease.

“Our duty is to fight anti-Semitism, racism and fascist nostalgia, those sick evils that… threaten to eat away at the foundations of our democracies,” Israeli President Reuven Rivlin said at a venue near the former camp, which is now a museum.

Polish President Andrzej Duda, who did not attend Israel’s national Holocaust Memorial last Thursday because he was not allowed to speak, thanked Rivlin for his presence at Auschwitz.

“This presence is a sign of remembrance, it is a visible sign of opposition to inhuman treatment, hatred, against all forms of hate, especially racist hate,” Duda said.

Set up by Nazi Germany in occupied Poland in 1940, at first to house Polish political prisoners, Auschwitz became the largest of the extermination centres where Adolf Hitler’s plan to kill all Jews – the “Final Solution” – was put into practice.

It was liberated by Soviet troops in 1945.

Returning to the site where her relatives were murdered, 92-year-old Holocaust survivor Yvonne Engelman, who now lives in Australia, recalled the horrors of the camp.

“We could hear children coughing, crying, choking from the gas and also the smell of human flesh and the great fear we experienced that maybe you will be the next victim,” she said.

During a sombre ceremony at the gate to the camp, Duda spoke of the chilling efficiency of the Nazis’ genocidal plan, which included vast crematoria to burn the bodies of victims.

“For years the factory of death operated at full capacity. Smoke was rising from the chimneys, the transports were rolling. People walked and walked in their thousands. To meet their death,” he told a gathering that included several dozen ageing survivors, German President Frank-Walter Steinmeier and French Prime Minister Édouard Philippe.

Studies show that anti-Semitic sentiment persists, especially in Europe, despite the scale of the Nazi atrocities, the powerful testimony of survivors and the number of films, books and exhibitions chronicling the Holocaust.

A 2019 survey by the U.S.-based Anti-Defamation League showed that about one in four Europeans harbour “pernicious and pervasive” attitudes towards Jews, compared with 19% of North Americans.

In Germany, 42% agreed that “Jews still talk too much about what happened to them in the Holocaust“, it said. Two people were killed in a shooting near a synagogue in eastern Germany in October, in what officials called an anti-Semitic attack.

Despite the joint message on anti-Semitism, Monday’s event highlighted tensions between Poland and Israel over Holocaust remembrance.

Rivlin called on Poland not to politicise the history of the Holocaust, a reference to the insistence of the nationalist Law and Justice (PiS) government that Poles had behaved entirely honourably during World War Two.

As part of a broader policy of historical revisionism, PiS seeks to highlight Poland’s own suffering in the war, when some six million Poles, including three million Polish Jews, were killed and Warsaw was razed to the ground.

While celebrating the thousands of Poles who risked their lives to help Jews during the Holocaust, PiS ignores others who helped the Germans and killed Jews.

“We shall forever hold sacred and cherish the courage of the … thousands of Poles,” Rivlin said. “We remember that during the war the Polish nation fought with great courage but we remember too that there were not a few in the Polish nation who stood by and even contributed to the murder of Jews.”