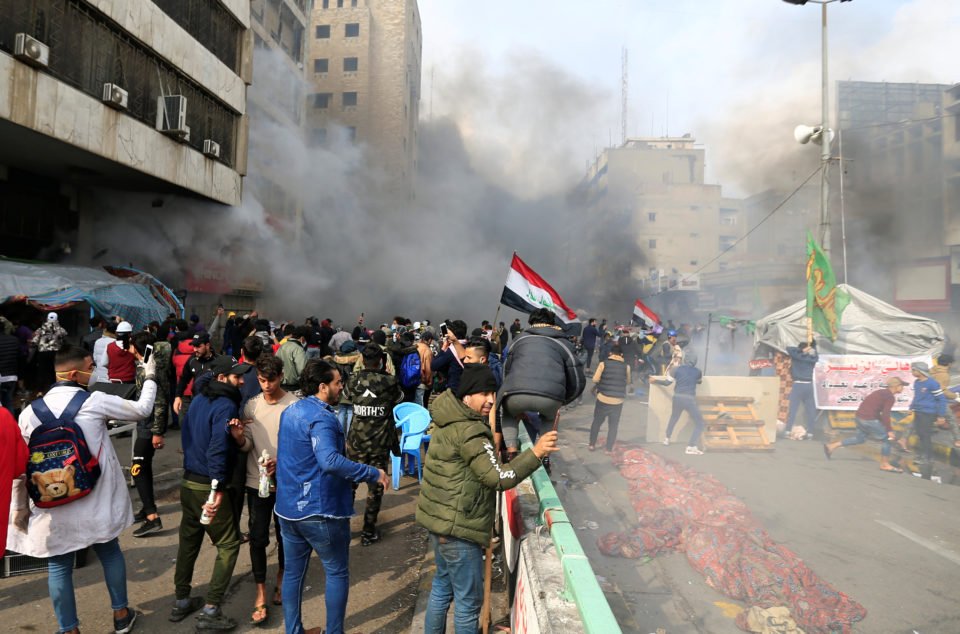 At least one of five Katyusha rockets fired at Baghdad‘s fortified Green Zone hit the U.S. embassy, wounding three people, in a rare direct targeting of the compound, security sources said. Reuters could not independently verify the rocket attacks.

Anti-government protests erupted in Baghdad on Oct. 1 and quickly turned violent. Security forces and unidentified gunmen have shot protesters dead. Nearly 500 people have been killed in the unrest.

The protests are an unprecedented leaderless challenge to Iraq’s Shi’ite Muslim-dominated and largely Iran-backed ruling elite, which emerged after a U.S.-led invasion toppled Sunni dictator Saddam Hussein in 2003.

Demonstrators are demanding that all parties and politicians be removed, free and fair elections be held and corruption rooted out. The government has responded with violence and piecemeal reform. The international community has condemned the violence but not intervened to stop it.

In Baghdad, one protester was killed, police sources and medics said, and more than 100 others hurt across the country after the security forces tried to clear protest camps.

At least 75 of those hurt were in the southern city of Nassariya. A Reuters witness said protesters set fire to two security vehicles and hundreds of other demonstrators controlled key bridges in the city. Later, unidentified men set fire to tents that are part of a months-long sit-in in the city centre.

Protests have flared in the last two days after populist cleric Moqtada al-Sadr, many of whose supporters had participated, said he would no longer be involved in anti-government demonstrations.

Sadr opposes all foreign interference in Iraq but has aligned himself more closely in recent months with Iran and the Tehran-backed parties that dominate state institutions in Baghdad.

Some demonstrators have accused the populist cleric of treachery of their cause.

Sadr has organised separate anti-American demonstrations aimed at pressuring U.S. troops to leave Iraq, moves that critics say aim to eclipse the anti-establishment movement which has taken aim at all politicians including Sadr.

The increase in unrest comes after Washington killed Iranian Major-General Qassem Soleimani, the mastermind of Iran’s control over Iraq, and an Iraqi paramilitary chief in a drone strike in Baghdad on Jan. 3.

Iran responded with ballistic missile attacks on two Iraqi military bases, but the killing has revived tensions in Iraqi politics and delayed the formation of a new government.

Security sources told Reuters that at least one rocket landed inside the U.S. embassy compound and wounded three people. If confirmed, it would be the first time in years that such attacks on the Green Zone, which are regular, have actually hurt staff there.

Prime Minister Adel Abdul Mahdi condemned the attack in a statement from his office, and said that the continuation of such acts could “drag Iraq into becoming a battlefield.”

Sadr had called for demonstrations against the U.S. Embassy in Baghdad and other cities on Sunday but cancelled them, with his office giving “avoiding internal strife” as the reason.

Sadr’s supporters had bolstered anti-government protests before the assassination of Soleimani but have since been directed by their leader to focus their anger against America. They began withdrawing from anti-government sit-in camps on Saturday.

“We protest because we have a cause. I don’t think Moqtada Sadr or any other politician will change our mind,” said a protester in Baghdad who declined to give his name.

“I don’t go to protests often but I came out today because of what they did yesterday. I want to express my solidarity with my brothers in Tahrir,” said Hussain Ali, a student, referring to demonstrations in Tahrir Square, the main area of protests in the capital.

In Baghdad, protesters were coughing and washing their faces and eyes to rid themselves of the effects of tear gas while medical workers provided first aid, as the site was inaccessible to ambulances, a Reuters reporter said.

Earlier on Sunday, hundreds of university students had gathered in Tahrir Square, the main protest camp, chanting slogans against the United States and Iran.