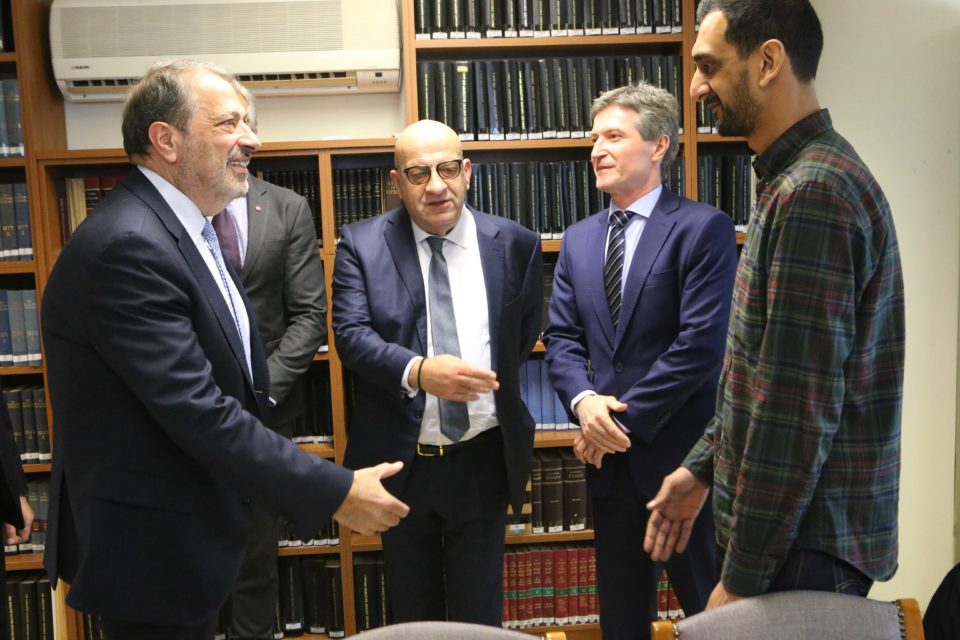 Justice Minister George Savvides on Tuesday appealed to the public to come forward with information on corrupt practices in football, vowing that authorities will investigate thoroughly and dismissed the notion of any cover-up.

He was speaking to the press after a meeting with a visiting delegation of Uefa – European football’s governing body – the chief of police, and the head of the Cyprus Football Association (CFA) George Koumas.

The Uefa team are in Cyprus at the invitation of the CFA after the former recently sent the latter five ‘red notices’ on suspicious betting activity.

Savvides stressed the importance of the public coming forth with specific information to assist law enforcement in investigating.

“For those who love the sport, it is not enough for them to say they have information – they must provide it to the police.”

Describing the meeting with Uefa officials as “highly constructive,” Savvides said it was agreed the two sides would establish a direct line of communication, rather than wait for Uefa to dispatch its ‘red notices’.

The procedure until now was that Uefa would send a dossier to the CFA, who would then forward it to the police.

Savvides reiterated that phone surveillance is a powerful tool in solving crime.

Asked whether the police can guarantee confidentiality for prospective whistleblowers, the minister said yes.

A day earlier, the president of Omonia football club said the club had completed a report on the state of Cypriot football and were ready to hand it over to the Uefa representatives.

Stavros Papastavrou also said his club is offering up to €25,000 to whoever comes forward with useful information about corruption in football.

Asked whether the Omonia president has since filed a formal complaint to police, Savvides said he had not.

Although Papastavrou did meet with senior police officials, he did not provide a deposition.

For his part head of the Uefa mission to Cyprus Joseph Clement said he had “a good feeling” that Cypriot authorities are serious about tackling corruption in football.

During their meeting with Cypriot officials, they discussed devising an ‘action plan’.

Clement said he was convinced that through tighter cooperation positive results can be achieved, but they would not come overnight.

Chiming in, main opposition Akel on Tuesday panned the government over its inaction.

“The complaints made by the president of Omonia about corruption in Cypriot football are very serious,” a statement by the party read.

“This is not the first time such complaints have been made. Even President Anastasiades spoke about the rotten state of Cypriot football when he said that criminal elements are preying on football, the need for the CFA to be subjected to checks, and about television broadcasting rights.”

The party added: “The president had vowed that his government would take action to deal with the situation. However, not only he did not do anything, but former referee, turned whistleblower Marios Panayi was forced to leave the country.”

Akel said it was high time the law was amended to enable the Cyprus Sports Organisation to exercise effective control over the CFA, which is not the case currently.

The party also referred to the auditor-general’s findings pointing to a conflict of interest between the management of football broadcasting rights and the private business activities of the CFA head.

Akel went on to ask what has become of the ‘red notices’ sent by UEFA regarding suspicious betting activity, especially on betting platforms based in Asia.

“How many of these notices were actually investigated?”

Responding, spokesman for ruling Disy Demetris Demetriou said “the government is doing its utmost to eradicate corruption from football once and for all.”

Demetriou suggested the problem lay in that no one is willing to go on the record.

“That is why we urge whoever claims to possess information, be it on fixed matches or attempted bribery, to get in touch with authorities immediately.

“It is the only way that complaints can have an impact. Otherwise they are merely sensationalist stunts.”