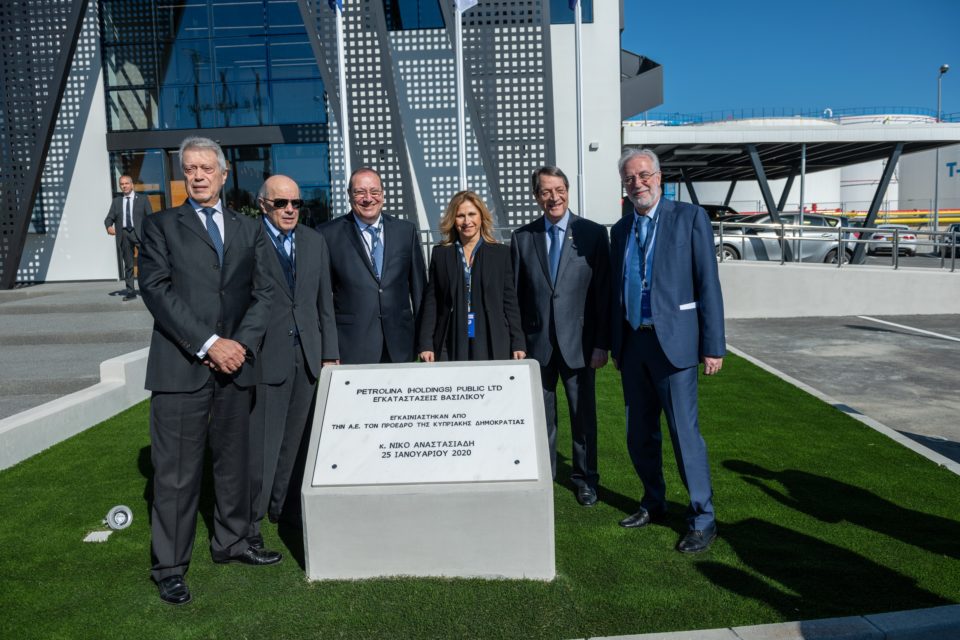 Petrolina proudly unveiled its new, state-of-the-art terminal at Vassiliko on Saturday, January 25th. The start of the operations at the new terminal respected the agreed timeline and are consistent with Petrolina’s vision, to always lead and be a driving force for Cyprus’ economy and business affairs.
The official inauguration of the terminal, which is one of the largest investments ever made in Cyprus by a Cypriot owned company, was conducted by the President of the Republic, Mr. Nicos Anastasiades, in the presence of members of the Council of Ministers, leaders and officials of political parties and government departments, representatives of the business community and members of the press.

Acknowledging the groundbreaking project, which required an investment of over €80 million, the President congratulated the Petrolina Group for its business activities and progress through the years, as well as the respect it always shows to the needs of its customers and associates. In his speech, the President highlighted that “Especially, and as a result of the Group’s core policy to proceed with high-profile investments, even in the midst of the financial crisis, and by employing such a large number of employees, it has made a decisive contribution to the boosting of the local economy and society”.
Welcoming the guests, Petrolina’s Executive Chairman, Mr. Costakis Lefkaritis, noted that the relocation of its installations to Vassiliko marks the start of a new era, which stems from the Company’s unwavering commitment to always be self-reliant.

“We have completed a project for both the present and the future,” Mr. Lefkaritis said. “Our Vassiliko terminal were created with state-of-the-art technology and in compliance with the latest European standards. Its full automation coupled with new technologies relating to additives, allows the company to market top-quality products, with every possible precaution taken to ensure environmental safety.”
Petrolina’s Executive Chairman also made a special mention to the contribution of the Company’s human resources to the success of the Company, as well as to Petrolina’s Corporate Social Responsibility policy. “The Company has proven with tangible actions that it is an integrated part of the Cypriot society, from which it has always received unlimited support.”

The positive prospects for the company, as a result of the insightfulness and strategic planning that characterize Petrolina, were noted by its Chief Executive Officer, Mr. Dinos Lefkaritis, who mentioned that the company is in a position to compete with international companies, leading the way in the energy sector. In his address, Mr. Lefkaritis focused on the Group’s strategic outlook. “The compass guiding our Company’s decisions and actions has always been its vision to continue to be present wherever Cypriots are: on the land, in the sky, at sea, offering consumers top-quality products and services, at competitive prices, while remaining at the top of the Cypriot market, respecting the Cypriot consumer and the environment.” Always, he added, referring to the 2nd and 3rd generation, in the spirit and values stipulated by Petrolina’s founders: “Hard-working, business-ingenuity, pioneering spirit, innovation, sensitivity and pride.”

Mr. Lefkaritis also stressed that “our vision has always been to pioneer every step as a Group and be a driving force in the country’s financial and business sectors. Invest in new, innovative products, services and infrastructure, while creating new jobs.” He thanked the President of the Republic, the Minister of Energy, Mr. Lakkotrypis, and former Ministers of Interior, Mr. Socrates Hasikos, and Transport, Mr. Marios Demetriades, as well as all Permanent Undersecretaries and officers at the ministries, for their valuable contribution. In closing, Mr. Lefkaritis added that “I would like to say that, during the construction of this facility, we were faced with several obstacles, the most crucial of which was bureaucracy. My wish is that the Government’s efforts to simplify procedures bear fruit as soon as possible, for everyone’s benefit.”

Petrolina’s terminal at Vassiliko includes 18 tanks, with a total capacity of 113.000 cubic meters of all types of liquid fuels. With efficient and prompt servicing capabilities in loading, unloading and distribution, the facility can cover the needs of the whole of Cyprus, as well as international markets.
Special attention was given to safety, quality and environmental protection during the planning of the facilities. These include the Carbovac/Alma vapor recovery unit, which minimizes the emission of vapors, in line with the European standards for emissions.

Trial of teenagers accused of causing death of another adjourned