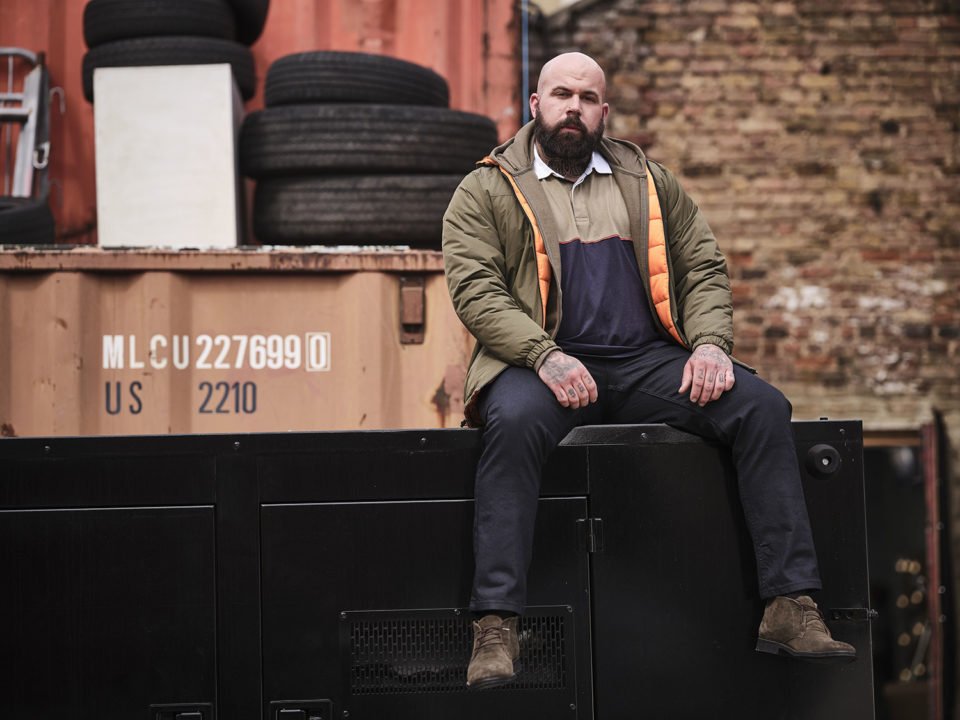 Ben Whit never dreamed of becoming a model, but after doing a Groupon photoshoot for fun, someone at the shoot suggested he send the photos to a talent agency, and in 2016 he was signed by Bridge Models, becoming the UK’s first plus-size male model.

“Being in front of the camera was different, obviously, to the lifestyle I was living at the time – I was a landscape gardener,” says Whit, who has also appeared on Channel 4’s Naked Beach TV series, wearing nothing but underwear and body paint.

“But once you start getting used to it, it becomes second nature really. It’s really enjoyable.”

The 26-year-old is now fronting a campaign with menswear retailer Jacamo, which has released a study revealing 38 per cent of British men don’t feel body confident, while 27 per cent think the fashion industry should do more to cater for men’s varying body shapes.

Here, the plus-size model offers his body confidence and fashion advice for men…

Jacamo found 38 per cent of men don’t feel body confident – why do you think that is?

“I think a lot of it’s to do with social media. It portrays [the idea that] men should look a certain way; that’s quite a big thing. With my social media platform, I get a lot of people contacting me and asking me for tips on how to feel body confident. But also high street stores not having clothes that fit, that’s another problem.”

Have you ever struggled with body confidence issues?

“When I was growing up, I was really skinny. It didn’t make me feel good and my other mates were starting to get in good shape as they got older. Then all of a sudden, I put on weight and then I thought I was too big – so no one ever seemed to be the same size as me.

“Then I started losing my hair at a young age, and that was probably one of my biggest body confidence issues.

“Obviously, no male wants to lose their hair at a young age, and I kept trying to use different products to try and make it look thicker, but then one day, I decided to shave it off.

“It gives me a unique look. From there I’ve got other modelling bookings, so it seemed to work in my favour, and I feel a lot happier in myself.”

What advice would you give to those struggling with self confidence?

“The first thing you’ve got to do if you don’t feel great about yourself, is stop listening to what other people say you should look like. Don’t listen to what social media says the modern man should look like, because everyone is different.

“I think once you start to learn to love yourself, you’ll feel a lot more body confident than if you’re just listening to what everyone else thinks you should look like.”

Which retailers do you think are best for plus-size menswear?

“At the moment, Jacamo is miles ahead of a lot of other companies. They’ve got a new size in, which is 1XL, between XL and 2XL – a lot of people fit in-between those sizes.

“I’ve had that problem for years. You either buy something in XL and it’s a little bit too tight, you don’t feel comfortable, but then if you go up to 2XL, it’s too big.

“ASOS’ plus-size range is really good and River Island’s big and tall range is getting better. New Look is good if you like streetwear style clothes.”

What have you learned about yourself since you started modelling?

“I’ve learned how to dress myself better for my size, and I’ve learnt to buy from companies that cater for plus-size men a lot better.

“And I’ve just learnt to have more confidence in myself, to put my mind to anything and really just give it a go. If you don’t try, you’ll never know, will you?”