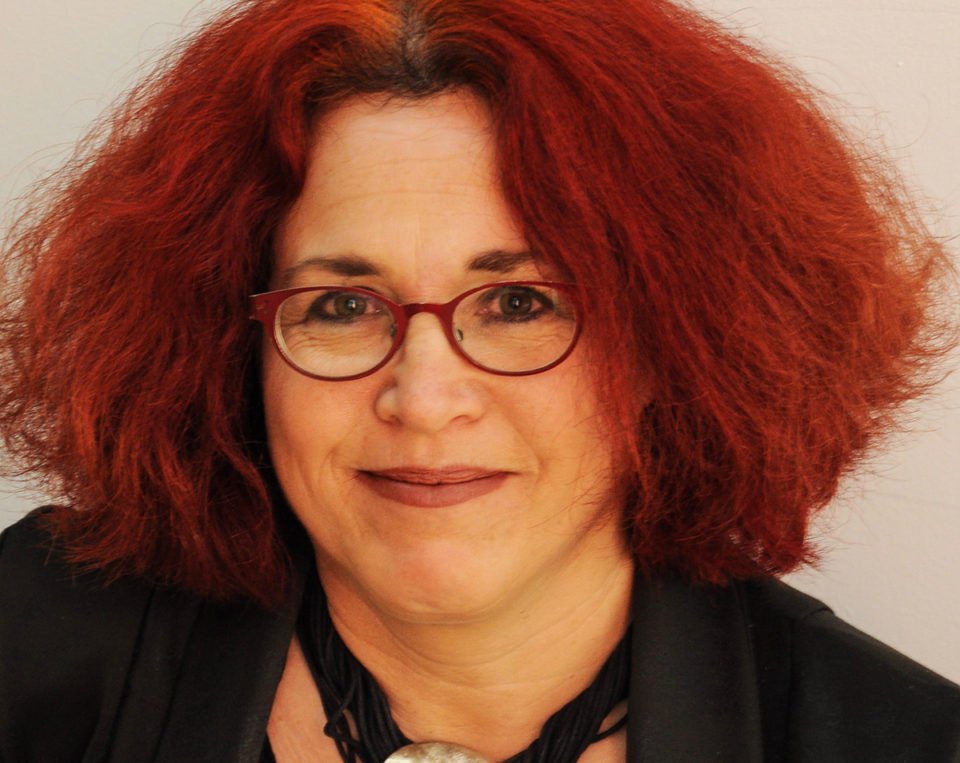 Earlier this month a British teenager was convicted for lying about a gang rape. But the decision outraged public opinion around the world, questioning the way women are treated. AGNIESZKA RAKOCZY meets a woman from Israel who led a group to protest outside the court during sentencing

An art video posted on Youtube in 2014 shows a redheaded woman working her way methodically through a stack of 400 wine bottles as she smashes them one at a time against a specially built stone altar in the courtyard of her Jerusalem home.

This is not an ad for some anti-alcohol temperance movement. Ruhama Weiss’ hands appear bloody, pierced by the flying shards of shattered glass. Her dramatic performance, ‘A Woman Breaks – Yalta’s Beit Midrash’ (Yalta’s House of Study) is a re-enactment of the 1,700-year-old Talmudic story of Yalta, daughter of a wealthy Jewish leader, wife of the great sage Rav Nachman in Babylonia. 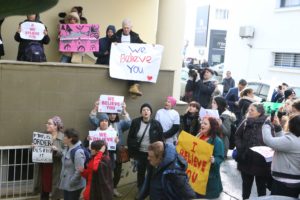 Weiss explains how Yalta was once insulted in her home in Babylon by a famous rabbinical scholar from Palestine who was visiting her husband. Having blessed the proffered wine in keeping with local custom, the visitor defied convention and declined to share the blessed cup with the woman of the house. An outraged Yalta, deeply offended at being omitted from the blessing, went upstairs to where the wine was stored and smashed 400 jars, sending torrents of it pouring down on the scholar and her husband who dined below. When she descended, she ordered the visitor out of her house.

“Yalta is such a fascinating personality,” says Weiss, a professor of Talmud and Spiritual Care at the Jerusalem campus of Hebrew Union College.

“She is one of very few women ever mentioned in Talmud. She is powerful because of the positions her father and husband hold in the community but still look how extreme her action had to be in order for men to register her protest. It is actually a sad story that many women know very well – that even if you are right, as a woman, often the only way to be heard is to do something really outrageous, and then, of course, they will call you crazy.”

The 53-year-old scholar, newspaper columnist, poet, artist and public intellectual is well-known in Israel for her challenging analysis of ancient texts and established symbols of patriarchal Judaic tradition. She is also the woman who earlier this month stirred up a whirlwind of feminist debate and activism in Cyprus when she led a group of nearly 100 Israelis to the island in support of the British teenager convicted of lying by the Paralimni court after she withdrew charges she was raped by up to 12 Israeli teenagers.

“This case is huge in Israel and of course everybody has his or her own opinion about it. But many people, including me, feel very ashamed of what happened to this girl. So when I heard she was found guilty I posted a short note on my Facebook profile just saying that I was going to Cyprus to protest against this verdict in front of the court and that anybody was welcome to join me,” Weiss says.

During a court hearing for sentencing held one week after the guilty verdict a rowdy crowd of mostly women congregated outside the courtroom, offering support to the teenager as the hearing went on inside.

“I was convinced I would be there alone with just a couple of friends but the response overwhelmed me. So many people contacted me to say they supported what I was doing. It was an amazing experience,” Weiss says.

Born in Jerusalem in a traditional Orthodox family (“which means very traditional opinions about women’s place – both in the world and in the family”), Weiss had an older sister and four younger brothers. It wasn’t long before she realised that her school education differed from that of her brothers. They were studying and learning the Talmud whereas she wasn’t.

“The Talmud is the most important Jewish text, a series of books, a huge corpus of ideas, laws and legends – all the Jewish tradition developed from the first to the fifth century and then interpreted again and again. When I was told that as a girl I was forbidden to study it, of course I became interested in it, even more so. But they told me that a woman’s brain is not sufficiently developed to understand it,” she explains wryly.

Inquisitive, Weiss started asking questions “about God and beliefs, about women’s and my own place as a woman in the Jewish traditions that I had inherited from my parents, and also about politics because the political stream I was from was quite right wing and extremist regarding settlements and Israeli-Palestinian issues”.

Predictably, inevitably, her questions were mostly unwelcome. “I got suspended from school several times for things like disagreeing with our teacher about burning the New Testament that some Christian group had sent us by post,” she recalls. 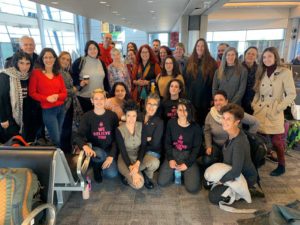 It was the last straw, however, when her teachers told Weiss that she would be able to continue her education only if she promised she would never go to the army and never take a maths exam. Facing such an ultimatum, she left the school, vowing never to come back. But her parents insisted she should keep up her studies of Jewish tradition so she agreed to continue her education in a more liberal institution.

“This opened a door for me to become non-orthodox,” she says. “I started studying in a liberal yeshiva and again asked questions but this time my teachers really embraced them and helped me grow and learn.”

After high school, Weiss opted to enlist for the two-year, alternative national service specifically designed for Orthodox women who don’t want to join the army. She then proceeded to study the Talmud at Jerusalem’s Hebrew University. It was, she recalls, an exemplary foretaste of what independent-minded women such as herself might expect to deal with in their life ahead.

“The Talmud department there is very small and very patriarchal. Up to now, there was never a female Talmud professor at this faculty. I did my PhD there but I knew that if I stayed there I would keep on hitting the same wall over and over again so instead I moved to the Hebrew Union College which is very small, very progressive, very open minded and feminist. Of course, it is not one of the main universities in Israel but it is home and is where I belong.”

Had she seen the movie Yentl directed by Barbara Streisand, I ask. Streisand plays Yentl, a Jewish girl in early 20th century Poland, who dresses as a boy in order to study the Talmud. “Yes, of course I have. The Isaac Bashevias Singer story that the film is based on was a major inspiration for me, all the more so given my frustration that the Talmud was still off limits for women to study. Being rebellious, of course I decided that I had to study it. Fortunately, it is a great work so my rebellion transformed into a love affair.”

So what is the Talmud? “The Talmud is a book created by hundreds of people over hundreds of years. It is a crazy book, about strange beliefs and surprising ideas, very rich, chaotic and contradictory. It deals with very basic questions, for example how to eat your food or wear your clothes, how to get married or divorced. But I have to explain to you that while I teach the Talmud I don’t follow its ways. When I teach it I rather look for ideas behind its laws and the mechanisms that helped the sages who wrote it control the community.”

I am not an expert on the Talmud, Orthodox Jews or in fact anything connected with Judaism so my next question is an obvious one – does Weiss believe in God and also how would she define herself nowadays in the context of Jewish tradition. “Well, I don’t obey Jewish law so I am not an Orthodox any more, although I have to say that going away from my roots took me a long time and wasn’t easy,” she says.

“I am a Reformed Jew which means I am committed to morality but not the Jewish law per se. What does it mean? We change Jewish laws and traditions according to moral issues like, for example, human rights and feminism. We are also opposed to the occupation of Palestine. And yes, since I am not an atheist, I think I believe in God.”

It seems an amazing road that this rebellious woman has covered journeying from her traditional roots to where she now stands, but it gets more dramatic. “Actually, all of this was nothing – the worst thing that happened to me in my entire life was incest.”

In the ensuing silence, I pondered whether it would be appropriate to delve deeper. But it is Weiss that breaks the silence to tell me that she doesn’t mind talking about it any more. “I have just published my fourth volume of poetry and I am out there, all about it. Actually I only write about two things in this volume, this and my son joining Israeli army which for me as a pacifist was very traumatic experience”.

Weiss says the story with her father is “really terrible and I was silent about it for a very long time. But with the MeToo movement, I feel I cannot hide any more. It is not fair to my students, not fair to people who know me, and not fair to people that I want to speak for or those I want to show that it is possible to speak out about such matters. Also, it is important for me to speak out about it because doing this means I am breaking away from my father’s narrative and his determination to keep it a secret. The truth is my father was molesting me for years and I couldn’t do anything about it. But I am not going to be ashamed or blamed for it any more. So there is no reason for me not to talk about it.”

Weiss pauses for a moment before haltingly continuing: “You know, such an experience divides you as a person into two parts. One, the dominant one, is out there, going to school, doing stuff, simply functioning, mostly unsuccessfully of course but functioning. The other part, the one that has been molested, is very sad and hurt and frightened, and most of the time, thank God, not active at all. But it means that I am still searching to be one whole person and that is very difficult. Very very rarely have I experienced such a feeling. But when I came to protest in Cyprus I could feel that I am one, that the two parts met and I am whole again. It was because I knew that I was in exactly the right place and doing exactly the right thing.”

She no longer sees her father, a man she describes as “a very poor, weak person”. Never having sought recourse in the courts, she feels she had achieved a semblance of closure thanks to her writing, her poetry especially, and also through her teaching and activism, but adds, “Coming to Cyprus was a kind of closure for me because when we stood there in the front of the court and shouted that we believed the British girl I had also a feeling that I was screaming for myself and finally after so many years I could say out loud that I believe myself…”