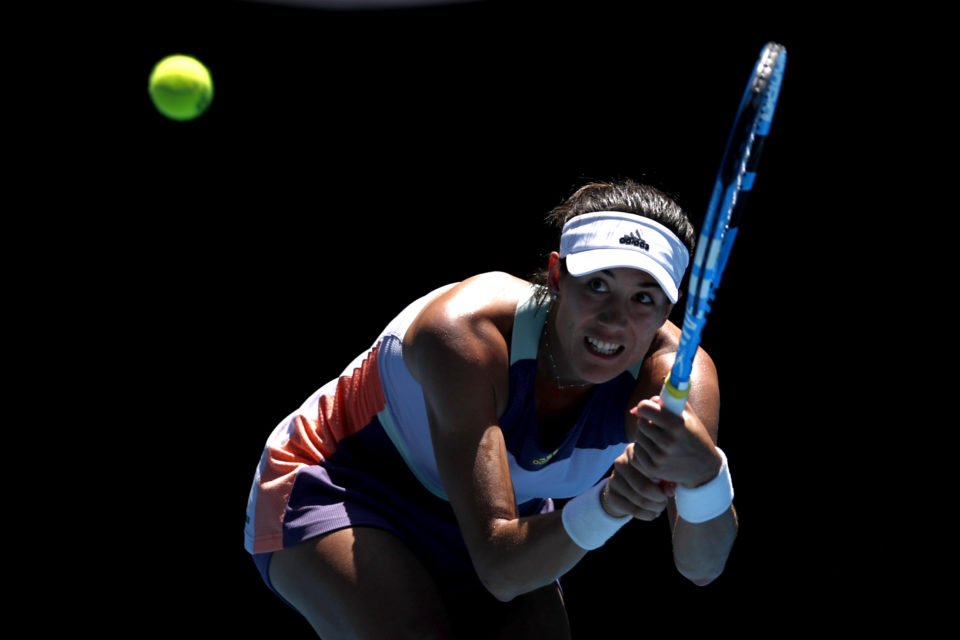 Garbine Muguruza stormed back into the Grand Slam big time with an emphatic 7-5 6-3 win over Russian Anastasia Pavlyuchenkova to reach her first Australian Open semi-final on Wednesday.

The twice Grand Slam champion will meet former finalist Simona Halep on Thursday for a place in the title match after another confidence-building performance at Melbourne Park on a sunbathed Rod Laver Arena.

Unseeded at a Grand Slam for the first time since 2014, Muguruza made few pundits’ lists of pre-tournament contenders and her campaign was almost scuppered by a viral illness.

But the hard-hitting Spaniard now finds herself well-placed to make off with a third major title following her triumphs at Wimbledon in 2017 and Roland Garros the year before.

“I came (here) not feeling great. I wasn’t really thinking, ‘How far will I go?'” the Venezuela-born 26-year-old told reporters.

“I had enough already thinking, ‘How will I go practise today?’

“I took (one) day at a time … Each day I was gaining a better feeling – instead of getting frustrated thinking (about) the future.”

Since making the 2018 French Open semi-finals, her last trip to the final four of a Grand Slam, Muguruza spent much of the following 18 months in a funk.

She split with her longtime coach Sam Sumyk last July after a first round exit at Wimbledon.

“I think the toughest moment is when you work hard, work like before, or even harder, and you don’t feel like results are coming fast,” she said of the career lull.

“So I think that’s the tricky part for us. Athletes sometimes can get a little bit desperate, get too impatient about it.

“It’s very tough to be for so many years in the top of the game, being that consistent … Barely (any) players can hold that for many, many years in a row.”

Her revival follows an off-season climb to the summit of Kilimanjaro, Africa’s highest mountain, and a reunion with former mentor and Wimbledon champion Conchita Martinez, who guided Karolina Pliskova to four titles last season.

The Martinez collaboration was a key part of Muguruza’s run to the Wimbledon title and it has produced instant success since resuming in the offseason.

Muguruza said Kilimanjaro was a “life-changing experience” but was cagey about what happened to her on the mountain.

“I’m in a tournament, at this stage, it’s not the right moment,” she said. “I will definitely share … my experience. I think it’s fun to hear.”

She was not holding back against 30th seed Pavlyuchenkova, bringing the full force of her trademark aggression to bear against the seasoned Russian in the second set.

Pavlyuchenkova, a quarter-finalist at all four Grand Slams, hastened her exit with eight double-faults, including one on break point which gifted Muguruza a 4-2 lead in the second set.

Muguruza closed out the match with a barrage of winners to set up an intriguing clash of styles with Wimbledon winner Halep, an all-court scrapper with a seemingly limitless tolerance for physical punishment.

Fourth seed Simona Halep took just 53 minutes to thrash Estonian Anett Kontaveit 6-1 6-1 and storm into the semi-finals on Wednesday and will meet Muguruza for a place in the final. .

Halep had not lost a set in her previous two meetings with Kontaveit, who managed just one breakpoint on the former world number one’s serve.

“I think it’s a tough match (against Halep),” said Muguruza, who holds a 3-2 winning record over the Romanian third seed.
“Excited to play another battle against her.”

Top seed Ash Barty will meet American Sofia Kenin in the other women’s semi-final on Thursday.