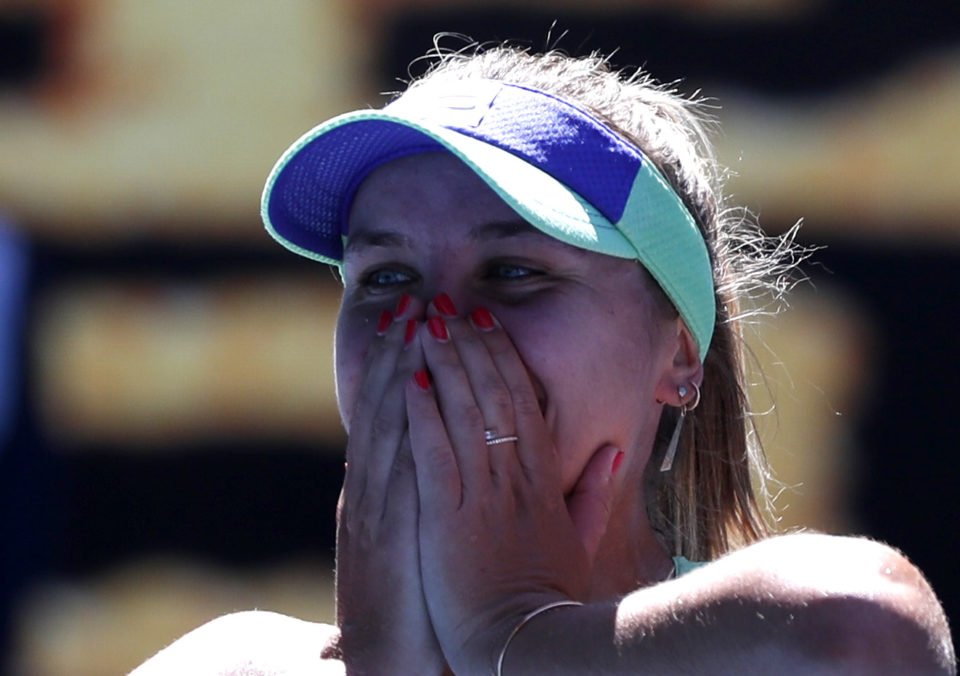 Sofia Kenin sent world number one Ash Barty spinning out of the Melbourne Park semi-finals 7-6(6) 7-5 on Thursday, crushing Australian hopes of a first home-grown champion at the Grand Slam in 42 years.

Barty came into the match with a 4-1 record against the American and had the 14th seed on the back foot for most of the opening set with a combination of big forehands and backhand slices.

The 21-year-old Kenin showed her frustration at times, throwing her racquet on court, but managed to hang in and saved three breakpoints to hold for 3-3 and eventually force a tiebreaker.

With temperatures soaring to 38 degrees Celsius (100F), the American saved two set points and then converted her first to take the opening stanza and stun the crowd into silence.

But the fans soon found their voice again, belting out chants of, “Let’s go Barty, let’s go,” as the home favourite broke Kenin early in the second set to go up 2-1.

Barty, who was bidding to become the first local woman to progress to an Australian Open final since Wendy Turnbull in 1980, was in the driving seat serving at 5-4 and with two setpoints but Kenin broke to bring the set back on serve.

The American then held before converting on her second match point on Barty’s serve to book her place in the final.

Kenin paid tribute to Barty after her win.

“She’s such a tough player, she’s playing really amazing and I knew I really needed to find a way to win,” said the American.

“She came up with some really great shots, it was really tough. There’s a reason why she’s world number one … I’m just so thankful for this.”

Garbine Muguruza prevailed 7-6(8) 7-5 in a battle of attrition against world number three Simona Halep to reach her first Australian Open final on Thursday.

The unseeded Spaniard arrived at Melbourne Park with low expectations but will now face American 14th seed Sofia Kenin bidding to win her third major title after emerging from a period in the Grand Slam wilderness.

With the temperature nudging a scorching 40 degrees Celsius (104F) at Rod Laver Arena, Muguruza was dragged into a see-sawing scrap by Halep, a former finalist at Melbourne Park.

The Spaniard had to break back from 5-4 down in the second set and then held firm to claim the win on a second match point when Romanian Halep failed to clear the net on an attempted passing shot.

The 26-year-old Muguruza would not have been on many lists of pre-tournament contenders but the class and fighting spirit that propelled her to the 2016 French Open and 2017 Wimbledon titles has come flooding back in Australia.

“You start day by day, that’s what I was doing,” she said.

“Very excited to be in the final, it’s a long way to go. I have one more match on Saturday.

“I wasn’t thinking I was down. I was thinking, ‘keep going and at some point you’re going to have your opportunity’.

“I know I was facing Simona so it was going to be a hard match. So I was just hanging in there and fighting with all the energy I had.”

No Brexit bashes for British expats in Cyprus

Brexit: What will happen to mobile roaming charges?