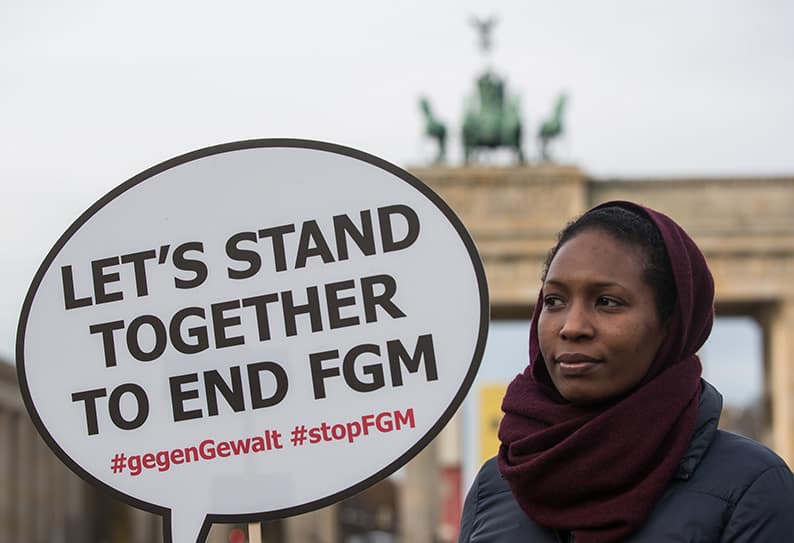 File photo of a rally against female genital mutilation in Berlin

By Menna A. Farouk

Egypt has detained a retired doctor after the death of a 12-year-old girl on whom he performed female genital mutilation (FGM) sparked anger among women’s rights activists.

The victim’s parents and aunt took her to a private clinic where she underwent the illegal procedure, also known as female circumcision, the public prosecutor’s office said in a statement.

“After she left, she suffered complications. The doctor tried to save her, but she passed away,” said the statement, pledging “firm action” against anyone carrying out the procedure in the future.

The girl’s relatives are also being held for a period of four days while the authorities investigate her death, said the statement, issued late on Thursday.

Genital cutting of girls was banned in Egypt in 2008, but the practice remains a rite of passage and is often viewed as a way to promote chastity.

A 2016 survey by the U.N. Children’s Fund showed that 87 percent of women and girls aged 15-49 in Egypt have undergone the procedure.

Villagers say husbands prefer wives to be cut and often ask young brides to undergo the procedure before their wedding.

In 2016 the practice was made a felony, meaning doctors who perform the procedure can be jailed for up to seven years. Anyone requesting the operation – usually relatives – faces jail of up to three years.

However, activists say the law has not been strictly enforced and even those found guilty are often given a lighter penalty.

Entessar el-Saeed, a human rights lawyer at the Cairo Foundation for Development and Law, said the persistence of the practice showed more needed to be done to raise awareness, particularly in rural areas.

“Medicine, the law and religion are against this practice and yet it is still widespread,” she told Thomson Reuters Foundation.

FGM typically involves the partial or total removal of the external genitalia. In some cases the vaginal opening is sewn up. Other procedures, more common in parts of Asia, include nicking or pricking the clitoris.

World leaders have pledged to eradicate the practice by 2030, but campaigners say the ancient ritual remains deeply entrenched in many places.

Reda Eldanbouki, a lawyer who works to hold those responsible accountable, said that authorities including judges and police often treated female circumcision cases with leniency in Egypt.

“Most of them do not take the cases seriously because they believe that it is for the benefit of the girl to undergo female circumcision for the protection of her chastity,” said Eldanbouki, executive director of the Women’s Center for Guidance and Legal Awareness.