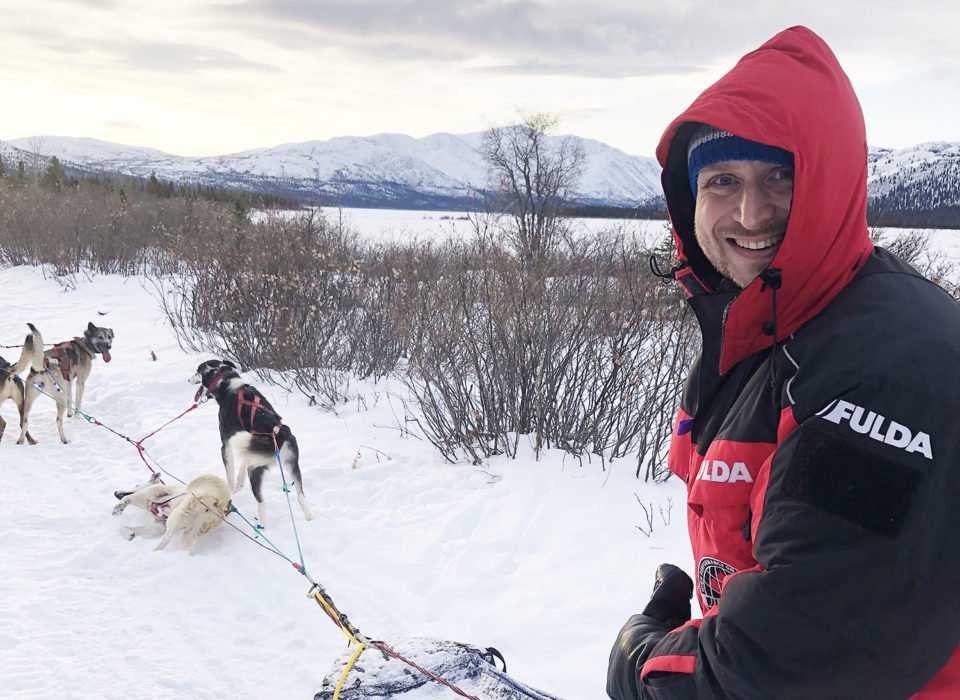 DAMON SMITH experiences the gold rush of Harrison Ford’s new film, The Call Of The Wild, in the quirky, snow-laden territory of Yukon

GLIDING sweetly through wind-kissed undulations of crystalline snow, I foolishly take my eyes off the four Alaskan huskies charging excitedly round a sharp bend obscured by a silent guard of white spruce.

In exquisite slow motion, the mountain vista of Fish Lake tilts off its axis and my sled crashes ingloriously into a bank, throwing up a shimmering cloud that pin pricks the right-hand side of my face.

After a few elasticated seconds of self-inflicted humiliation, being dragged on my side by four-legged charges – Siku and Taco up front, Cobalt and Nelly tethered close behind – there is momentary calm before a symphony of urgent barks and agitated backwards glances of glinting brown eyes compels me to dust myself off and concentrate.

Five layers of thermals and snug-fitting winter clothing ensure only my pride is bruised on an exhilarating first morning in Yukon. The westernmost of Canada’s three vast territories was immortalised in Jack London’s 1903 short story The Call Of The Wild, which reframes the author’s experiences of the 1896 Klondike Gold Rush through the eyes of a St Bernard-Scotch Collie mix named Buck.

In a new film adaptation starring Harrison Ford it’s safe to say, the 77-year-old leading man commands a sled more convincingly than me.

Bordered by Alaska to the west, Yukon is almost twice the combined land mass of Great Britain and Northern Ireland, but has fewer than 40,000 inhabitants, almost a quarter of whom are indigenous peoples. The rights of the 14 Yukon First Nations to govern lands and nurture cultural practices and heritage was enshrined in 1993 by Prime Minister Pierre Trudeau (father of current premier Justin Trudeau).

Giddy on adrenaline from dog sledding, I buckle up as we venture off road in the afternoon, with experienced guide Tobias from Epic North Tour Experiences in a six-seater Viking all-terrain vehicle along sections of the Dawson Overland Trail – a 330-mile winter road built in 1902 linking Whitehorse and Dawson City.

Barren-ground and woodland caribou, featured on the reverse face of the Canadian quarter, outnumber humans by roughly 10 to one in the Yukon and are cherished in First Nation tribes’ oral histories. The roar of the Viking’s engine coupled with stereophonic screams as we slalom down steep inclines dissuade any herds from gracing us with their presence.

The cosmopolitan and ethnically diverse seaport of Vancouver is a convenient gateway to the Yukon capital. The temperature drops almost 20 degrees Celsius during the two-hour flight northwest to the city, home to nearly 70 per cent of Yukon’s population on the traditional territories of the Ta’an Kwach’an Council and Kwanlin Dun First Nation.

The rose pink wooden fascia of the Matthew Watson General Store, the oldest operating shop in Yukon, is an austere neighbour to the haunted Caribou Hotel. The spectre of publican Bessie Gideon supposedly makes regular appearances, but tonight, brightly-gartered showgirls Sugar and Cinnamon join current owner Anne Morgan in the furnace-heated Surly Bird Saloon (named after a potty-mouthed parrot named Polly, who roosted on the premises) to serve refreshing tonics immortalised in Canadian poet Robert Service’s 1940 verse, The Ballad Of The Ice-Worm Cocktail.

The 534km route along the North Klondike Highway from Whitehorse to Dawson City, where a badly malnourished Jack London developed scurvy while prospecting for gold, crosses the territory’s rivers – the Yukon, Pelly and Stewart.

Homemade cinnamon buns, which dwarf the size of my out-stretched hand, are served warm by avuncular, white-bearded owner Steve Watson, as an unctuous accompaniment to steaming hot coffee.

A white-water stretch of the Yukon River known as Five Finger Rapids, where four basalt columns divide the fast-flowing water into channels, provides another picture-perfect pit-stop.

In The Call Of The Wild, woefully inexperienced gold prospectors Hal and Charles encounter a toothless old squaw at the rapids, and trade a revolver for horse hide to feed their dogs.

Snow starts to fall as we pass Moose Creek campground, which proudly lists its wintertime population as “four great guys and gals, two friendly dogs”, and romanticised flurries become an alarming blizzard as we reach the outskirts of Dawson City.

Before Klondike Fever took hold in 1896, the area was a fish camp to generations of the Tr’ondek Hwech’in First Nation people. Within the space of two years, around 40,000 gold seekers arrived, establishing the largest city west of Winnipeg. Jack London, then 21 years old, arrived in October 1897 and spent one gruelling winter working a claim on the north fork of Henderson Creek, roughly 120km south of Dawson City. A replica of his log cabin, constructed from original wood, is installed on the corner of Firth Street and Eighth Avenue and welcomes paying visitors to the Jack London Museum during balmy summer months.

Today, the city is home to almost 1,400 people and gold mining continues to drive the local economy alongside tourism. Wearing thick winter cloaks of snow, tumbledown buildings slump and heave on active layers of permafrost and a wooden-hulled dredge sits silently in Bonanza Creek, abandoned by a four-man crew that once processed 22 buckets of excavated gravel per minute through the belly of the gargantuan beast.

Talk to locals about climate change and they will tell you, it is literally dividing communities here. West Dawson, on the other side of the Yukon River, relies on freezing conditions to create a government-certified ice road during winter months. For the past three years, unseasonably warm conditions have rendered an ice bridge unsafe.

In the Sourdough Saloon of the Downtown Hotel, I’m cajoled into breaking 45 years of sobriety and order the notorious Sourtoe Cocktail comprising a generous glug of honey-flavoured Yukon Jack whisky garnished with a mummified human toe.

The rosy-cheeked bar mistress dons a splendid white captain’s hat, recites an oath – “You can drink it fast, you can drink it slow, but your lips must touch the gnarly toe” – and serves me a look that, were it a cocktail on the bar menu, would mix two measures of wry amusement with one measure of encouragement and a splash of pity.

Sickly sweet nectar courses like molten lava down my throat as I successfully (and willingly) evade a 2,500 Canadian dollar fine for swallowing the severed digit. When the Yukon issues its call to the wild, I answer.

An apple a day…