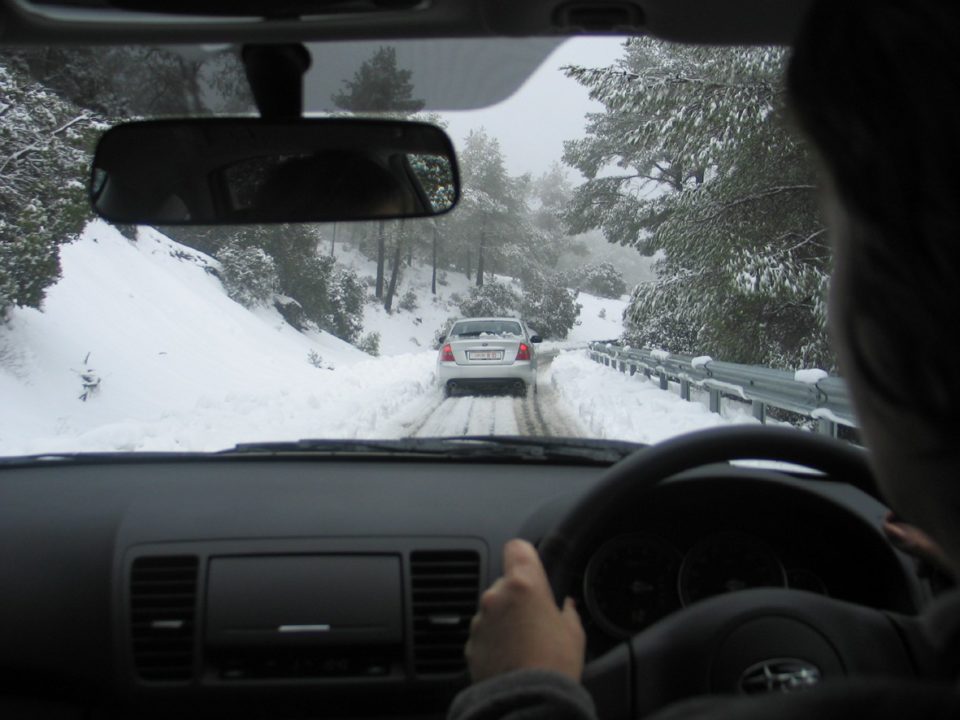 Recent snowfall in the mountainous areas of the island led to thousands of people hopping into their cars to go and see the snow – leading to congestion and forcing the police to close some roads.

While, generally speaking, the roads are kept clear of snow, it’s as well to be prepared if you’re planning on making a similar excursion, because it could be that you will be caught in a snowstorm if the weather changes suddenly: I well remember a ‘whiteout’ during a test drive in on Troodos a few years back, and it’s quite scary – not to mention potentially dangerous.

There are several things you can do to minimise the chance of mishap, and they begin before you even start the engine.

If you’ve spent the night in the mountains, make sure your automatic wiper control is switched off before turning on the ignition; if you don’t, you could blow the wiper control fuse if they are frozen to the windscreen. Wherever you start your journey, check that your wipers are in good working order so that you’re able to clean your windscreen effectively. Since wiper blades often deteriorate during the heat of summer in Cyprus, it’s a good idea to check their efficacy anyway at the start of winter.

Check your tyres for adequate tread: worn tyres will not grip properly when driving on snow and ice.

Use a good quality screen wash that protects even at colder temperatures so as to prevent the water from freezing.

Be prepared for every eventuality by ensuring that your car is equipped with a torch, a high-visibility gilet so you can be seen if you break down, a blanket to keep you warm, some food and a hot drink. It’s sensible to also have some spare screen wash handy as well as de-icer, and of course your phone charger.

Other things you should have in the car anyway, like a first aid kit and a warning triangle, and for your trip to the snow it’s a good idea to take jump leads, a spade and a piece of carpet that you can use to put under your drive wheels if you do get stuck in the snow.

Adjust your driving. Once you reach the snow, you will need to adjust your driving to the conditions: always accelerate gently, use low revs and change up to a higher gear as quickly as possible.

You can reduce wheel slip by starting off in second gear – or using ‘winter mode’ if your car has it.

Drive at a steady speed and make sure to maintain a safe stopping distance between your vehicle and the car in front: some experts advise leaving as much as ten times the normal recommended gap.

If you are driving uphill, leave plenty of room ahead so that you can maintain a constant speed without the need to change gear.
Use a low gear for going downhill and try to avoid braking unless it’s absolutely necessary, again making sure to leave plenty of space between you and the car in front.

When approaching a bend, you should brake before you actually start to turn the steering wheel, but if your car does lose grip try not to panic; keep calm, take your foot off the accelerator and turn your wheels in the direction you want to go in.

If the car does start to skid, steer gently into it – so, if the rear of the car is sliding to the right, steer to the right. Don’t take your hands off the steering wheel and do not jump on the brakes!

Remember to use your lights: if visibility is poor or when driving in sleet or heavy snow, use dipped headlights. If visibility drops below about 100m, put your fog lights on.

Be wary of driving in the wheel tracks of other vehicles because compressed snow can be icier than fresh snow; at all times, the brakes, the steering, the accelerator and even gear changes should be operated smoothly and slowly.

Also be aware of the environment that you’re driving in, especially microclimates that might appear. These could be areas that the sun hasn’t reached and which could remain icy even when the rest of the road has thawed.