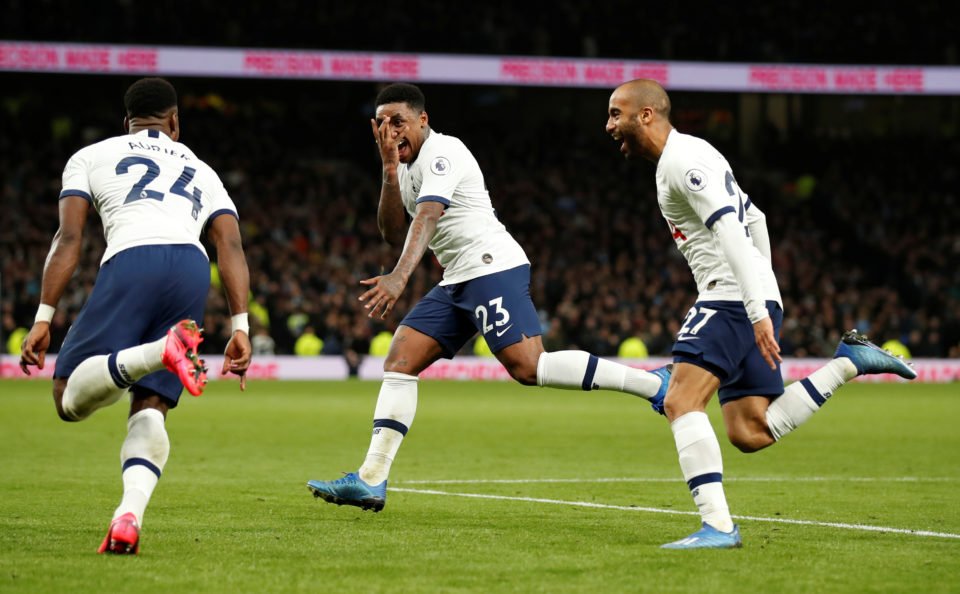 Tottenham 2 Manchester City 0
Steven Bergwijn made an instant impact on his Tottenham Hotspur debut with a stunning opener in his side’s 2-0 win over champions Manchester City in an incident-packed Premier League game on Sunday.

The Dutch midfielder, signed this week from PSV Eindhoven, swept home a right-foot volley three minutes after City had been reduced to 10 men when Oleksandr Zinchenko was shown a second yellow card on the hour.

With City stretched Son Heung-min added a second in the 71st minute with a deflected effort, allowing Spurs manager Jose Mourinho to get the better of his old adversary Pep Guardiola for only the sixth time in 23 clashes.

City remain 22 points behind runaway leaders Liverpool and only had themselves to blame for a sixth defeat of the season as they wasted several gilt-edged chances and missed yet another penalty when Hugo Lloris saved Ilkay Gundogan’s spot kick.

Sergio Aguero was unusually profligate for City, striking the post in the first half and missing two other chances.

While City’s pursuit of Liverpool has long run out of steam, a second successive league win revived Tottenham’s push for a top-four finish. They moved up to fifth in the table, four points behind London rivals Chelsea.

Burnley 0 Arsenal 0
Arsenal were held to a goalless draw at Burnley in the Premier League on Sunday but Mikel Arteta’s side can count themselves lucky to leave with a point.

Jay Rodriguez and Jeff Hendrick missed golden chances for Burney to win a match they dominated for large stretches.

The result left Arsenal boss Mikel Arteta with one win from his first seven league matches in charge while Burnley have come through games against Leicester City, Manchester United and the Gunners unbeaten and seven points to the good.

“You don’t want to get too greedy, it’s a good run of performances and results. I thought we did enough to edge it, we had a couple of golden chances and kept them to meagre ones,” said Burnley manager Sean Dyche.

Arteta was disappointed with his team’s play in the middle part of the game.

“I was very pleased with the first 15-20 minutes, the way we came out and dominated the game. After 20-25 minutes we started to give sloppy passes away, gave throw-ins, corners away and that sequence is difficult to get out of here,” he said.

Arsenal did begin brightly and after Alexandre Lacazette was off target with a header, the returning Pierre-Emerick Aubameyang should have put them in front when he got round the back of Burnley to collect a through ball from David Luiz but sent his shot wide.

The Clarets looked the more determined, however, and with Dwight McNeil causing trouble down the left flank, they caused Arsenal plenty of problems after the break.

Hendrick headed wide a McNeil cross from a great position and Rodriguez blasted against the underside of the bar from close range after more good work from the Burnley winger.

The result left both sides on 31 points with Arsenal in 10th place, ahead of Burnley on goal difference.

There was something of an edge to the words of the two managers after the game, however, with Dyche replying sarcastically to a question about Arsenal players going down easily.

“It is lovely to watch when people are falling over, it is my favourite part. The game is in a fantastic state. No-one wants to address it apart from me, so I am absolutely happy with the state of the game,” he said.

Arteta suggested Burnley had chosen to make the surface as tricky as possible for his team.

“The conditions were difficult. The grass was this long. They didn’t put any water on it and obviously that is not a very helpful thing to play football,” he said.

Burnley’s direct style clearly caused Arsenal some problems though and Arteta conceded he had been prepared for what his side had to confront.

“Absolutely. I didn’t water the pitch yesterday at the training ground so … I was expecting it but that doesn’t make it easier to play the game,” he said.

English football fails its biggest test – will the public ever forgive?

Hopefully the above information has clarified things for you. As it was previously mentioned, if you are not sure whether you want to allow the cookies or not, it is usually safer to leave cookies enabled in case it interacts with one of the features you use on our site. However, if you are still looking for more information, then feel free to contact us via email at [email protected]-mail.com