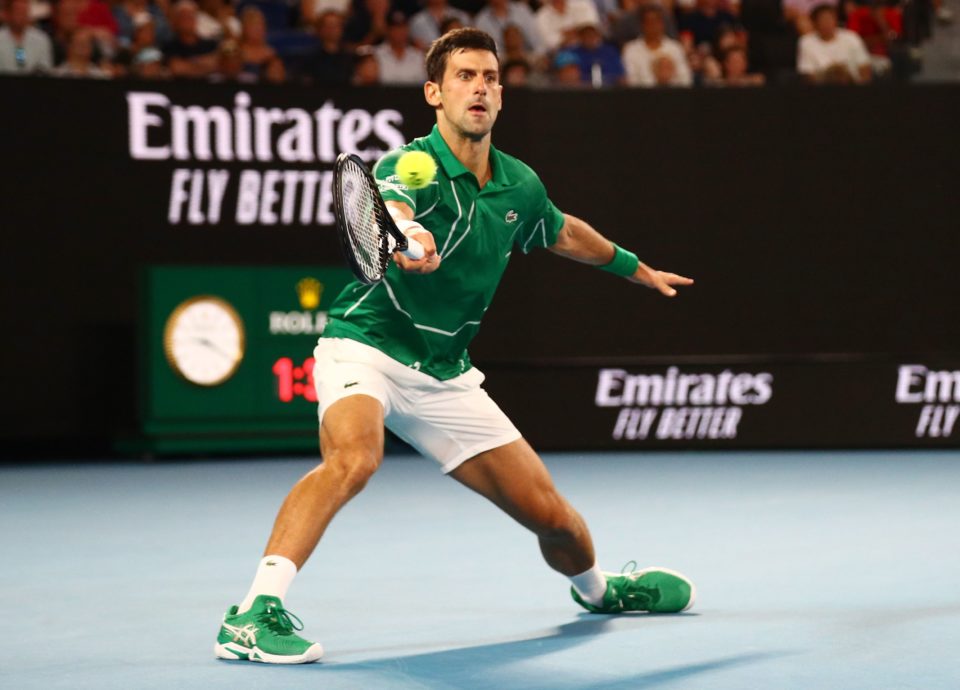 Serbia's Novak Djokovic in action during his match against Switzerland's Roger Federer.

An Australian Open that has seen the men’s establishment shaken by young talent comes to a fitting close on Sunday when defending champion Novak Djokovic takes on Dominic Thiem in an intergenerational decider.

The raging pre-tournament favourite, Djokovic will bid for a record-extending eighth title at Melbourne Park, having surprised no-one with his business-like march through the draw.

What has raised eyebrows is the profile of his opponent, a quite different proposition from the men Djokovic has faced before in the title match.

In fifth seed Thiem, Djokovic meets an opponent he has never faced at Melbourne Park and suffered recent defeats to – on hardcourt at the season-ending ATP Tour Finals and on clay during the French Open semi-finals.

Compared to Nadal and Murray, who have racked up years of beatdowns by Djokovic at the hardcourt Grand Slams, Thiem comes into the match relatively free of scar tissue.

The 26-year-old Austrian is also playing the tennis of his life.

Once dismissed as merely a threat on clay, he torpedoed any remaining doubts about his hardcourt bona fides with a quite brilliant four-set defeat of Nadal in the quarter-finals.

It was a match that not only showcased his extraordinary power and endurance but also his composure under pressure and courage to convert his chances when they came.

Runnerup to Nadal at the last two French Opens, Thiem may lack the major trophies and aura of Djokovic’s ‘Big Three’ rivals Nadal and Federer.

Wawrinka, who toppled Djokovic on the way to his 2014 Australian Open triumph and twice more in the French and US Open finals, put his backhand to devastating use against the Serb.

The backhand down the line may be the most exhilarating shot in tennis but few players have the courage or control to use it on clutch points.

Thiem let it rip against Nadal and young gun Alex Zverev in the semi-finals.

He may need to be similarly fearless to beat the Serb, whose peerless court speed and defence tend to repel the shots that would be winners against other players.

While there are few doubts about Thiem’s stamina, he will head into the match after eight hours of slog against Nadal and Zverev.

Djokovic will be fresh, having had an extra day’s rest after a three-set stroll in the semi-final against an injury-hampered Roger Federer on Thursday.

The last of the old guard standing in Melbourne, the 32-year-old Serb will look to extend the Big Three’s Grand Slam stranglehold to a 13th major title in succession.

It would be a remarkable feat from any perspective, but ultimately might only buy a few months’ relief from the eventual revolution from Thiem’s generation.