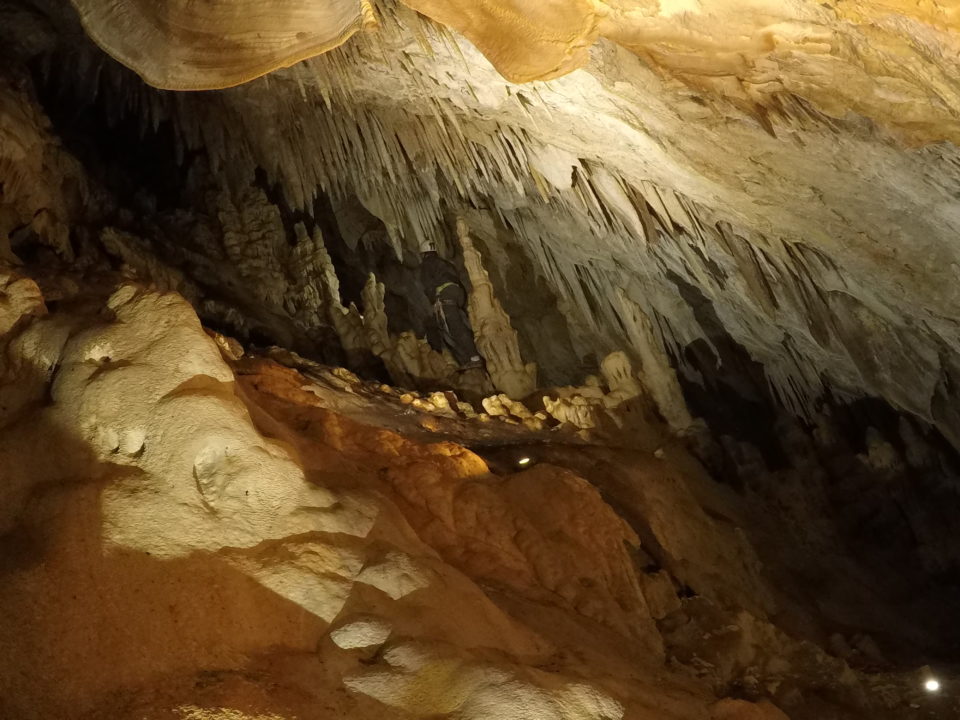 When researchers on a recently completed two-year bicommunal project went cave hunting they discovered that there may be as many as 360 caves in the mountains around Kyrenia alone.

The scariest of them all is the 200-metre deep Pendadaktylos Pothole, considered the deepest in Cyprus – for now.

The three researchers – Salih Gucel from the Near East University, and Iris Charalambidou and Kyriakos Georgiou from the University of Nicosia – knew nothing about caving before the project started in 2017, and the funding they received was not about teaching them a new, exciting, rather scary sport. It had real environmental significance.

The Kyrenia/Pendadaktylos mountain range was the ideal location because it is made of limestone, a stone suitable for cave formation. In fact, 95 per cent of natural caves exist because they are situated in areas with limestone, at least 360 caves around Kyrenia.

When Fulbright student Lauren Shatterfield arrived in Cyprus from the US in 2012 to study caves in Cyprus, she was hosted by the University of Nicosia for a year and during this time did an initial inventory of the Pendadaktylos caves.

Gucel, Charalambidou and Georgiou first met in 2006 and since then have worked on several projects on the protection of the environment and creating awareness both in the south and the north, convinced that bicommunal cooperation is the best way forward.

As they were aware of existing threats to caves, such as destruction from quarries and hunters shooting bats, they decided in 2015 to apply for an EU grant with the aim to raise awareness, get other researchers interested in the subject, and work on the cataloguing, mapping, conservation and clean-up of caves. In 2017, the project was approved, and they were able to start their research project, which has now been completed. The US embassy in Cyprus also helped, contributing to the funding.

First, they had to be trained in caving themselves, which they did in three workshops with the help of international experts from France, Slovenia, Croatia and Lebanon.

One of them was on how to climb vertical caves, the second on horizontal ones and the third on cave mapping. A core group of 10 cavers, both Greek and Turkish Cypriots, finished the training.

Exploring caves, the group found, is a scary experience.

“It is an environment alien to us,” assistant project coordinator Charalambidou said. “It is dark and you may be walking horizontally, then suddenly you have to move vertically as there is a drop, you may have to squeeze through small spaces. You have to use your whole body in ways you are not used to.”

“I thought I was not claustrophobic,” Georgiou, commented. “You need to train for it and overcome your fears. It is dark and silent, which means it is easy to lose your sense of orientation. And the roof can collapse at any time.”

Which is why people should never enter a cave alone, and not only should they be part of a team, but the team needs to work really well together.

“People in the group have to cooperate, they have to be patient, look out for each other and trust each other in an extreme environment,” Charalambidou explained.

They also need to be well versed in the code of behaviour. For example, caves are the home of bats, so human beings should not enter them in winter when they hibernate, and if they spot the nocturnal animals during other seasons they should be quiet and move away quickly.

As part of their project, the core group also travelled to a conference in Slovenia, and was particularly impressed with the fact that there are caves which are hundreds of kilometres long – the longest has a length of 327 kilometres.

The local caves are the only EU country where a fruit-eating bat lives but also species endemic to Cyprus. One of the findings of the project was the discovery of two spiders unique to Cyprus, proof of the biodiversity and importance of the caves.

Geologists were able to find out about the age of stalagmites and stalactites, the oldest of which is 174,000 years old.

“Stalagmites have rings like trees do,” project leader Salih Gucel said. “The importance of finding out about the age is to be able to understand what the climate was like.”

Changes in water levels over the centuries can be studied, and volcanic activity. Fossils of fauna compose of dwarf mammals have also been found.

Much remains to be done, and though the project is officially over, the work goes on.

Based in the Tashkent Wildlife Centre in the Vouno area the cavers are busy educating kids in schools and organising trips to caves, and children can also use the ‘cavesim’, short for cave simulator, a device for learning caving without the dangers of actually entering a cave.

Informing people is necessary, the researchers explained, though they try not to disclose the location of all caves to too many people, in the hope that this will limit the destruction of the species living in them as well as damage to the caves.

Would it be better not to take people at all then? Not according to them.

Some people will enter caves anyway, either to look for treasures, or because they are adventurous, and it is better at least to tell them how to behave, they believe.

An interest in the caves is also an incentive for authorities, who might care little for species such as bats and spiders, to preserve them.

“In one cave might be half of all bat species, they need to be protected,” Charalambidou said. “In the south, at least there are some EU regulations which authorities have to follow, and some fines, but in the north this is not the case so we have to find other ways.”