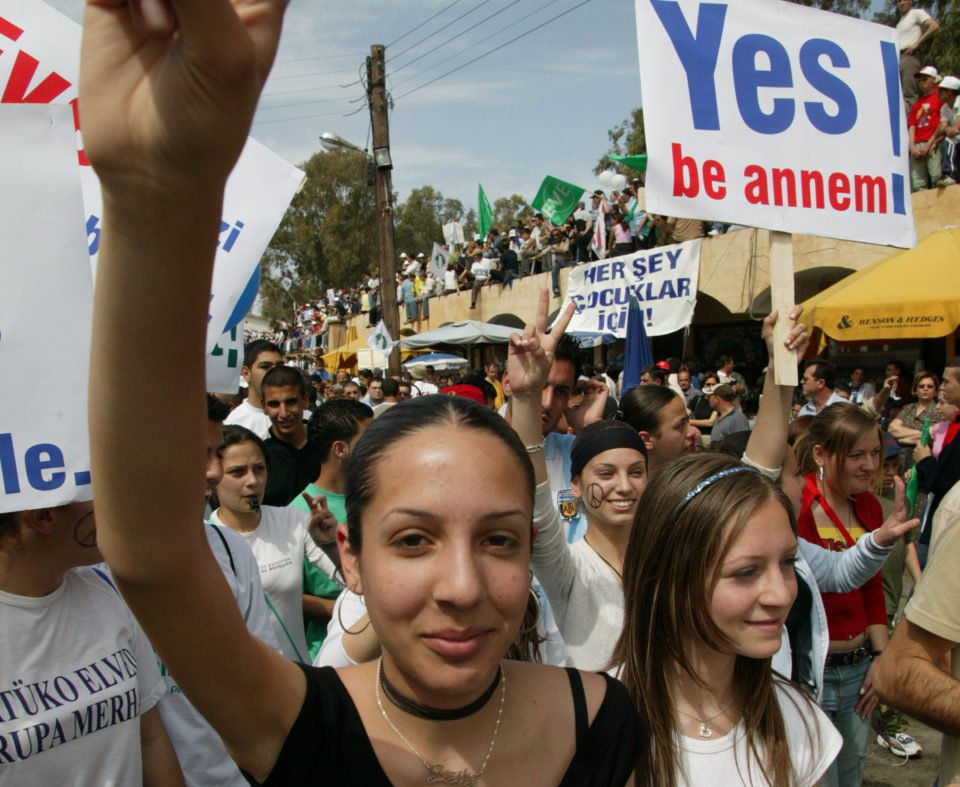 Turkish Cypriots demonstrate for a Yes vote before the referendum

When it comes to Brexit, the US Mideast peace plan and Cyprus, those Greek monsters Scylla and Charybdis spring to mind

It is Brexit day. The most underwhelming day since the whole Brexit saga began. The usual suspects are everywhere. On radio and on television – all passion spent yet still mouthing inanities about the shape of things to come after Britain leaves the EU.

No one really knows how things will pan out but when Boris Johnson won a landslide in the general election last December in place of a slender referendum majority to get Brexit done, those of us against it put our hands up and sued for peace. With a few exceptions unity has now been restored.

If the last three acrimonious years taught the British anything, it is that winning a referendum 52-48 per cent is not true democracy, whereas winning an overall parliamentary majority of 80 on a manifesto promise to get Brexit done is real democracy as we have always known it. The corollary to that is that referendums are a daft way of addressing complex political problems.

Parliamentary democracy only works if representatives and those they represent work in harmony. If they are in disharmony, as they were before Johnson won last December, government comes to a standstill.

But there are still pockets of disharmony. Scotland returned a huge majority of Scottish National Party Members of Parliament who feel very strongly that Scotland is being dragged out of the EU against her will.

The Scots are on the horns of a dilemma. Or to dignify their predicament with an allusion from Greek mythology: they are caught between Scylla and Charybdis.

Scylla was a sea monster with many heads, sharp teeth and a long reach. Charybdis was a water-sucking monster under the sea that devoured everything within range in a whirlpool it caused in the sea above. To evade one you risked getting too close to the other. Odysseus is said to have braved the waters between them in Homer’s epic poem and famously chose to lose a few sailors to Scylla rather than the whole ship to Charybdis, which was rational except to the sailors that perished.

In the real world there are four scenarios: you may be on the horns of a dilemma and can’t make up your mind because your options are equally bad; you may have conducted yourself in such a way that in order to avoid one catastrophe you are caught by the other; you have actually chosen the lesser of two bad choices; you are offered an impossible choice.

The Scots had a referendum and voted to remain part of the UK in 2014 as a member state of the EU. With Brexit now done, some Scots want another chance to vote for independence. If that happens, they will have to choose whether to stay part of the UK or rejoin the EU. In the end their sense of identity as Britons will have to be set against Scotland’s identity as a member of the EU. My guess is that they will make a rational and pragmatic decision to stay part of the UK, unless Brexit goes disastrously wrong.

The Palestinians were also in the news last week but they were not offered much of a choice. The so-called deal of the century offered by Trump was impossible to accept, and keep one’s dignity. It was so pro-Israeli even some Jewish people found it embarrassingly biased in its support for an exclusively Jewish state.

American mediation in the Middle East conjures up images of Bill Clinton between Yitzak Rabin and Yaser Arafat in 1993 all smiling after signing the Oslo accords. This time we had to endure the risible spectacle of an impeached president Trump and an indicted prime minister Netanyahu shamelessly passing off surrender terms to the Palestinians as the “deal of the century” – you couldn’t make it up.

The Turkish Cypriots have a difficult choice too, but unlike the Palestinians their choice is not impossible. They are caught between Turkey under president Erdogan and the Greek Cypriots. Hitherto, their natural instinct has been to move away from the Greek Cypriots even if this meant being swallowed up by Turkey.

The only time they moved towards the Greek Cypriots was in 2004 when they voted yes to reunification within the EU, only to be rebuffed by 75 per cent of Greek Cypriots who voted against having them back in a federal set up. Paradoxically, it was President Erdogan who encouraged them to vote for the 2004 UN plan for a united federal Cyprus.

A lot of water has flown under the bridge since then, made worse by the discovery of hydrocarbon wealth south of Cyprus – an unvarnished curse – if you ask me – compared to our olive oil wealth, which has always been a blessing for Cyprus.

How then should Turkish Cypriots navigate between Turkey and the Greek Cypriots?

In the old days when I used to go sailing in Cyprus with my old friend the late Andrew Ross-Clunis we sometimes had to negotiate the treacherous waters around Cape Greco. He was an experienced champion sailor who always observed as we went around the Cape that the sea commands respect.

What he also used to say between sips of Vat 69 whisky was that we should love our boat, as we love ourselves. So, when the sea got angry and rough he insisted we tie ourselves to her.

I thought of these reflections on the sea when considering the current predicament of the Turkish Cypriots and their relationship with Turkey. Like the sea, Turkey commands respect. But just like it is possible to respect the sea and love and cherish your boat, it should be possible for Turkish Cypriots to respect Turkey and love and cherish Cyprus.

The two are not mutually exclusive provided Turkish Cypriots retain their sense of Cypriot identity, which one hopes they still have in common with Greek Cypriots.