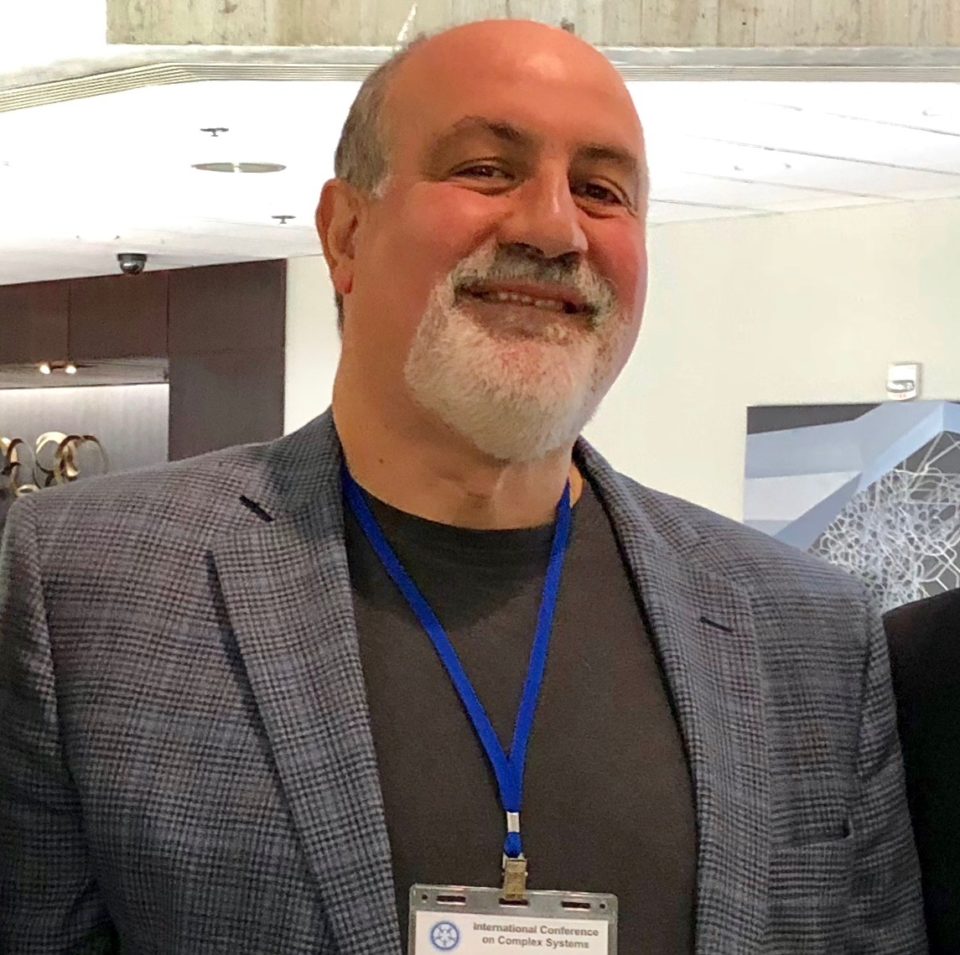 Scholar of Risk and Probability, philosopher, mathematician, former stock trader and best-selling author Nassim Nicholas Taleb probably has the best job title in the world: Flâneur. That is, at least, how he describes himself on his Twitter profile. Loosely defined as a lounger, an idler, a flâneur has more recently come to represent someone who is “an observer of society”.

When not meditating in cafes across the world, Taleb is also professor of risk engineering at NYU whereas before that, in keeping with inventive titles, he had been professor in the sciences of uncertainty at the University of Massachusetts Amherst.

So when last week he descended on Cyprus, the land of soaring risk, not to mention of the improbable, it was a big deal. He was here at the commendable initiative of the ambitiously named Institute for the Future at the University of Nicosia for the launch of the Makridakis Open Forecasting Centre.

Taleb is a preacher of Randomness. His best-selling books The Black Swan (2007) and Fooled by Randomness (2001) explored the hidden role of chance in life and in markets. They remain seminal texts on how every one of us, but especially business people, should factor unpredictability into our strategies.

He professes that we do not know very much, especially about the future, and worse still that we actually think that we can know and forecast the future based on grand theories and models.

With the confidence of someone who reportedly made his fortune betting against the US real estate boom in 2007, he nonchalantly dismisses academics, journalists, bureaucrats and experts, especially those engaged in economic forecasting.

Aphoristically and often not too clearly – with number bursts too fast for non-worshippers of mathematics – he is nonetheless entertaining in his brutality. He deconstructs perceptions of success and explores case studies where luck outsmarts skill and vision. He claims a central banker may lower interest rates, a recovery may ensue, but we do not know whether he caused it or if he slowed it down. We can’t even know, Taleb says, that he didn’t destabilise the economy by increasing the risk of future inflation.

Turning on CEOs, whose skills Taleb dissociates from the results of the companies they are tasked to run, he says they take a small number of large decisions but external factors play a far more considerable role in the outcome. CEOs are not entrepreneurs, he adds, but ‘empty suits’ that are just good at playing the part.

He calls on audiences not to fall for bullshit and to discount advice from people who don’t have ‘skin in the game’ i.e. something to lose. He detests those economists who love to theorise and engage in false solidarity with the oppressed while consolidating their privileges. More so those civil servants, who, he claims, as non-risk takers end up getting rich from public service. In his book Skin in the Game (2018) he is particularly scathing of the former US Treasury Secretary Tim Geinther for being overly rewarded after he left office after having bailed out the banking industry with taxpayer money.

At some point in Nicosia, both the attending president of the House of Representatives and the transport minister stood up and left mid lecture within seconds of each other. Their departure betrayed a customary combination of Cypriot ignorance and arrogance rather than any meaningful protestation to what they may have heard. When another attendee later tweeted that the two officials had left abruptly, a true-to-form Taleb remarked “Bureaucrats, I was told, find my lectures very painful’.

Yet Taleb was himself adviser to the IMF and to former UK Prime Minister David Cameron. In the early part of the previous decade Taleb was a frequent Downing Street visitor and Cameron had considered him his intellectual guru. But things turned sour with the British press when remarks Taleb made about the 2008 financial crash – an unpredictable black swan high-impact event – were distorted to imply that he considered such events useful. He countered that what he had said was that attempting to control the cycle was futile, but it was necessary for citizens to become robust to them, to be immune to their impact. Taleb criticised the British media and stopped granting interviews altogether. He declined to be interviewed in Cyprus too.

The Lebanese-American philosopher courts controversy and clearly enjoys his iconoclastic persona. He is certainly not modest. At the beginning of his presentation in Nicosia he put up his name in English on the screen and underneath the translation for Taleb: “Philologos” which in Greek means “lover of the word, seeker of knowledge”.

Taleb may not be the Socrates type of “I know that I know nothing” philosopher, but he is convincing when exposing the fragility of human knowledge and identifying the asymmetries of markets. For those not into economics or probabilities the audacious flâneur has something less uncertain and more reassuring to say: “What fools call ‘wasting time’ is most often the best investment.”

Nicholas Karides is the founder of Ampersand, the Nicosia based public affairs firm and network partner of ICF Next (Brussels). @NicholasKarides

Gas is not the solution

Tales from the coffeeshop: Show trials and martyrs Edek style

Turkey, guarantees and the Last Supper