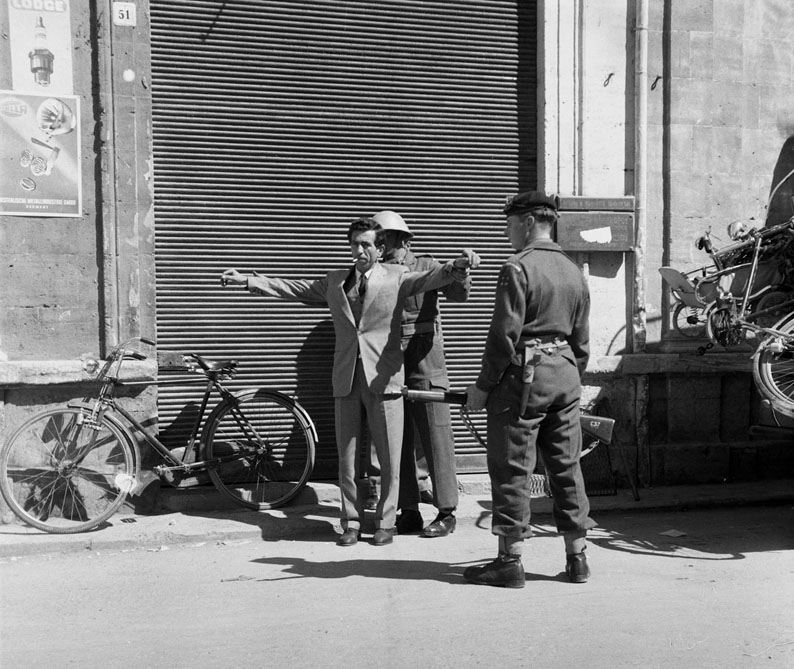 British soldiers search a cyclist during the Eoka campaign

A two-day international conference on colonial Cyprus, held in Nicosia next week, promises to shed new light on the period from 1878 until 1960.

The event, organised by the Cyprus Society of Historical Studies, the University of Nicosia, the University of Cyprus and Neapolis University will address various aspects of the British era in Cyprus, including political, social and cultural history through original submissions.

“The aim of the conference is to bring established scholars together with young aspiring scholars,” head of the Cyprus Society of Historical Studies Emilios Solomou and the main organisor of the event said. “We are very delighted with the tremendous response, there will be 75 speakers and two parallel panels so people can choose what sparks their interest.”

“We also want to revive interest in the association and in the history of Cyprus,” he added.

For these reasons the conference is free and open to the public.

The speakers are from Greece, the UK, Israel and Cyprus. “This is probably the largest conference on Cyprus history covering one period. There have been others, but they have been about the whole history of the country,” Solomou remarked.

The keynote speech, to be delivered on Friday evening by Robert Holland, professor emeritus at the Centre for Hellenic Studies, King’s College London, is titled ‘Playing the Turkish card’: Cyprus and Anglo-Turkish relations in the 1950s.

Other topics include ‘The freedom of thought and censorship in the Turkish Cypriot press during the British colonial period’ and ‘Britain’s war against Eoka, 1955-59: an intelligent failure?’

An ultimate aim is to also publish a number of papers on the subject of British colonialism. Depending on how many speakers will turn their presentations into an article, it will be decided which to publish, and in which publication. Some of the outstanding Greek ones will probably end up in the yearbook of the Society of Historical Studies, while suitable English papers are going to appear in the Cyprus Review.

The conference is held in memoriam of Aristides Koudounaris (1936-2018), late president and founder of the Cypriot Society of Historical Studies.