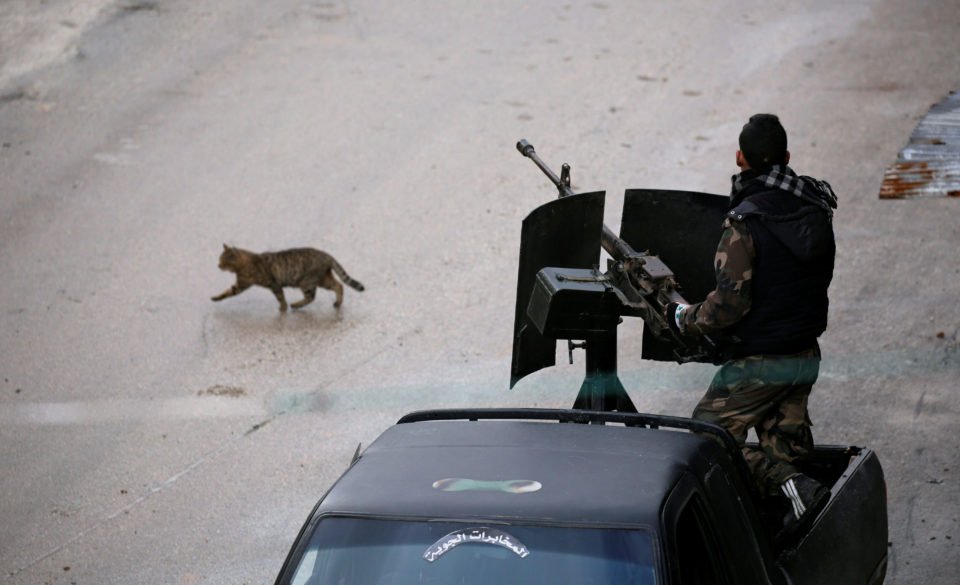 A Syrian army soldier watches the road as a cat runs across it in Maarat al-Numan, Syria, January 30, 2020. REUTERS/Omar Sanadiki

By Orhan Coskun and Daren Butler

Turkey said on Monday its military hit dozens of Syrian government targets after five Turkish soldiers were killed by shelling in Idlib in northwest Syria, where fighting threatens to test ties between Ankara and Moscow.

Turkey and Russia are on opposing sides in the fighting in Idlib and, though they work together elsewhere in Syria, President Tayyip Erdogan said Russian officials had been told they should “stand aside” in the conflict around Idlib.

Erdogan had earlier said the retaliatory operations included the use of F-16 fighter jets and responded to what Turkey called intense shelling of its troops in Idlib, the last big rebel stronghold after nearly nine years of war in Syria.

Syrian President Bashar al-Assad’s forces, backed by Russian air power, have made large advances in Idlib, prompting Turkey to warn it may launch a military operation there unless the fighting is halted.

“We are determined to continue our operations for the security of our country, people and our brothers in Idlib. Those who question our determination will soon understand they made a mistake,” Erdogan said in Istanbul before flying to Kiev.

Speaking later in the Ukrainian capital, he said developments in Idlib had become “unmanageable”.

The Syrian Observatory, a war monitor based in Britain, said 13 members of the Syrian government forces had been killed in Turkish shelling. A Syrian state TV correspondent said there had been no casualties among its government forces.

Erdogan accuses Russia of violating a 2017 agreement to reduce fighting in the region, and charge that Russia denies.

Ankara and Moscow have also been regularly conducting joint patrols in northeastern Syria. It is not clear whether or how such cooperation would be affected by any strains in ties over Idlib but Turkish broadcaster NTV said that the patrol on Monday was cancelled. Closer military ties between NATO member Turkey and Russia have meanwhile alarmed Washington and other Western allies.

Turkey has in recent days sent military vehicles, trucks and other reinforcements to the region in a challenge to Damascus and its Russian backers.

Rebels fighting to oust Assad, some of whom have been backed by Turkey, have also launched counter-attacks against the territorial gains by Assad’s forces.

SHELLING IN AREA OF SARAQEB

A Turkish security official told Reuters the shelling that killed the Turkish soldiers was in the area of Saraqeb, a town 15 km (9 miles) east of Idlib city that lies at the junction of two main roads which Damascus wants to gain full control of.

Turkey’s defence ministry said reinforcements had been on the move around Idlib. They were meant to prevent clashes in Idlib but were hit by Syrian shelling, it said, adding that a civilian member of its forces was also killed.

The Russian defence ministry said the Turkish units came under fire from Syrian government forces after moving without notifying Russia, though Turkey said it had coordinated its military movements with Moscow.

Though Erdogan said fighter jets were involved in Turkey’s response, the Russian defence ministry said Turkish planes had not violated Syria’s border and no air strikes on Syrian troops had been recorded.

A spokesman said the Kremlin remained concerned about militant groups around Seraqeb where Turkish forces were hit.

The fighting in Idlib has displaced hundreds of thousands civilians. The civil defence in rebel-held territory said at least nine Syrian civilians, including four children, were killed on Monday in a Russian air strike on a van carrying displaced people near the city of Aleppo, northeast of Saraqeb.

Turkey, which already hosts 3.6 million refugees from Syria, fears a new wave of migrants from Idlib. In Kiev, Erdogan said there were close to 1 million people in Idlib marching towards Turkish borders as a result of a Russian-backed Syrian government offensive.

Mple to perform live in Nicosia