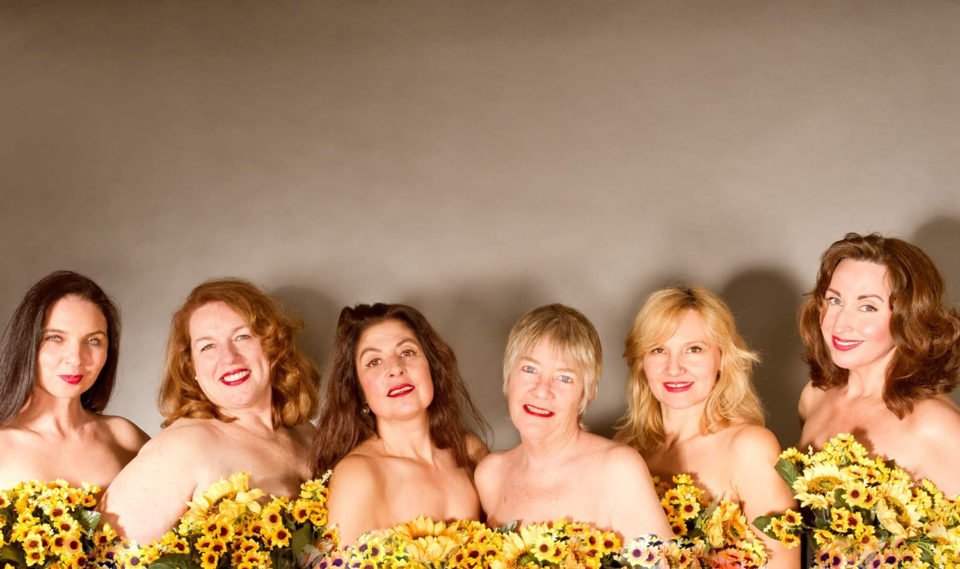 If you’ve seen the film, you can skip this first bit and get straight to the nudity. But why miss a gentle reminder of the most heart-warming, tear-jerking, based-on-a-real-life plot ever to come out of – wait for it – north Yorkshire?!

Calendar Girls is best known as the based-on-a-true-story 2003 film featuring an all-star cast; who could forget Helen Mirren as headstrong Chris Harper, or Julie Walters as the charming Annie Clarke? Set in Knapley, a small (and fictional, for the purposes of the silver screen) northern village, the story follows the members of the local Women’s Institute; a nationwide club of jam-making flower arrangers. When the husband of one of the women is diagnosed with terminal leukaemia, the ladies decide to produce a calendar to raise much-needed funds; a calendar which will feature photos of the WI ladies completely in the buff!

Of course, the naughty bits are hidden in the pictures, cleverly concealed behind traditional WI props: buns and pots and vases. But the calendar is such a novel idea (there’s added titillation in that most of the participants are not in their first bloom of youth!), that the initial print sells out, and gains the attention of the international media.

The dynamic between the seven main female characters (the heart-breaking health issues, the ‘will she, won’t she’ nudity, and the interplay of strong Yorkshire personalities) makes this such a delectable film. And also, a play…

Yes, the playscript (based on the original Miramax motion picture by Juliette Towhidi & Tim Firth) is available for licensing and, in a few weeks’ time, we’ll be enjoying our very own on-stage performance of Calendar Girls, courtesy of the Anglo Cypriot Theatre group. Featuring a local all-star cast, the play will be performed at Nicosia’s Satiriko theatre. And it’s being directed by someone who knows exactly what it’s like to be part of a small Yorkshire community!

“I grew up in a tiny community between the Yorkshire villages of Great Ayton and Stokesley,” director Theano A. Zivanaris reveals. “It was just 45 minutes from Skipton, the inspiration for the fictional village of Knapley and the place where the real-life events of the film took place. It was a typical chocolate box setting with a cricket pavilion, summer fete, and farmers’ market, exactly as in Calendar Girls. We even had our own branch of the official Women’s Institute, known as ‘The Dudley Dales’!

“It’s such a tight-knit community; people who really looked out for each other,” Theano reminisces. “That’s the Yorkshire way: yes, we’re known for being no-nonsense, no-frills, straight down the line sort of folk. But when someone is in need, all differences are set aside, and that whole community is going to rally behind you. The film really was very true to Yorkshire life,” she adds. “And it’s such an emotive, inspiring story, celebrating camaraderie, community and the female form – in any size, shape or colour! Plus, it’s eminently relatable: who amongst us has not had their life touched by cancer?”

And therein lies another twist to the ACT production: the Karaiskakio Foundation, Cyprus’ bone marrow donor Registry, will be present at every performance, encouraging audience members to sign up and – potentially – save a life. A member of the international registry, this foundation allows volunteer donors from Cyprus to help any patient in the world in need of bone marrow transplantation.

“The Registry ties in perfectly with the play’s theme: the support of the local community as one woman’s husband battles leukaemia,” Theano reveals. “It’s a story that’s heart-breaking, heart-warming, and heart-lifting all in one,” she smiles. “Despite the sad beginnings to the plot, it’s a script which is both deeply moving and desperately amusing; a narrative that will make you think, make you laugh, and maybe make you consider signing up to the Registry on the spot!

“Joining is such a simple process,” she continues. “Becoming a donor basically involves a mouth swab. Of course the decision is entirely up to each member of the audience. But the whole process takes just five seconds!”

Theano herself has been on the international registry since 2000, and though she’s never been a perfect match for someone with leukaemia, she’s come close to saving a life. “In 2013, Karaiskakio contacted me to say I was the closest bone marrow match out of approximately 800,000 people, so I understand the process pretty well. It’s totally different from what it was in the past: a tiny amount of blood and cells are taken in a non-invasive procedure; no bone marrow is removed, and it’s really just like giving blood.”

In Theano’s case, a closer match was found at the eleventh hour. But she continues to remain on the all-important Registry, and is keen for audiences to appreciate how little effort could save the life of a cancer sufferer. Of course, nobody’s forcing theatre-goers to sign up; a simple donation is certainly an option. And proceeds from the play will be going to help the Foundation, making this an evening out in aid of both a good cause and a good laugh – thanks, in no small part, to the actors themselves, says Theano.

“Cast chemistry is key in this production, and thankfully we have it in spades! I can’t imagine any other actors playing these parts. Every single member of the cast took on their role from our very first reading back in November.”

Rehearsals – which began at the start of January – are now well underway, and ACT’s version of Calendar Girls is shaping up to be a delightful production. Set in Yorkshire, directed by a northern lass, in aid of an excellent cause, and featuring a wildly talented cast of both amateurs and professionals, it’s the must-see of the season. Even if you haven’t yet seen the film, you’ll enjoy this iteration no end. And if you have, well, let’s just say there’ll be more than a few strategically placed buns on the stage!

Production by ACT will take place at the Satiriko Theatre on February 28 and 29, and March 6 and 7. For bookings, call 99 593236. For more information, visit the Facebook page ‘Calendar Girls Cyprus’