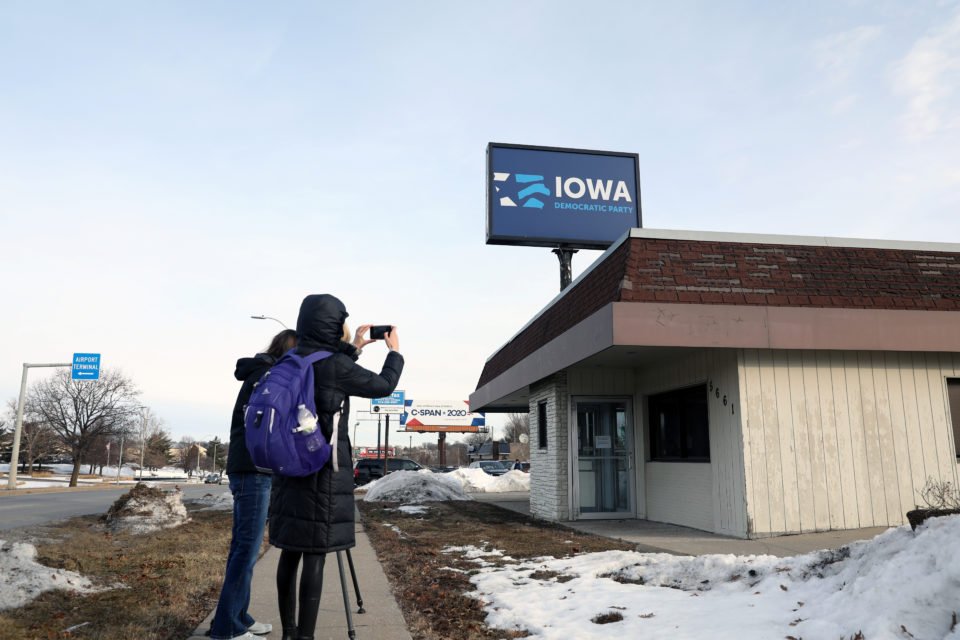 Press gathers outside the Iowa Democratic Party headquarters while the wait continues for the final vote tallies of the 2020 Democratic Presidential Caucus in Des Moines, Iowa.

From excitement to embarrassment to full-on rage, Iowa Democrats who took part in the first of the state-by-state nominating contests in this year’s U.S. presidential race ran the gamut of emotions as their quadrennial moment in the spotlight descended into chaos.

Jessica Leonard, who runs a food truck, was so furious about her state’s Democratic caucus on Monday that she said she may vote for Republican President Donald Trump in the Nov. 3 general election rather than the eventual Democratic nominee.

“It makes you want to distrust the whole procedure,” said Leonard, 41, explaining she had been a fan of former South Bend, Indiana, Mayor Pete Buttigieg, one of the Democratic candidates. “I’m not happy at all with how the Democratic Party is representing itself. It looks like a disorganized mess.”

Thousands of voters met on Monday night in venues ranging from barns to basketball arenas, an initially joyous process that soon turned into frustration at the party’s failure to quickly produce voting results.

The Democratic Party blamed technical problems for the delay in vote counting and planned to release results later on Tuesday.

The campaigns of the various candidates also criticized the process. Opinion polls had shown U.S. Senator Bernie Sanders and Former Vice President Joe Biden in the lead in Iowa, followed by Buttigieg and U.S. Senator Elizabeth Warren. The state-level nominating contests will determine the Democratic nominee to face Trump, who does not face a serious challenge within his party.

Precinct captains responsible for calling in results from around the rural state – which usually takes pride in its outsized role in the presidential race – reported difficulties using an electronic application as well as calling them in.

“We had people with their phones on speaker who were stuck on hold from 9 (p.m.) through at least 11,” said Bret Nilles, the Democratic chairman in Linn County, seated in Cedar Rapids.

Some voters blamed procedural changes for the delays. Iowa Democrats had pledged this year to make public how voters aligned on their first-choice candidates as well as the final caucus results once supporters of candidates who did not attract enough support to stay viable in the caucus system made a second choice.

“When you are trying to keep track of 1,700 precinct caucuses and totaling up all the numbers like that … the process just does not really support that very well,” caucus voter Tom Chapman, 56, said in Des Moines.

Two men jailed after pills found in their suitcases