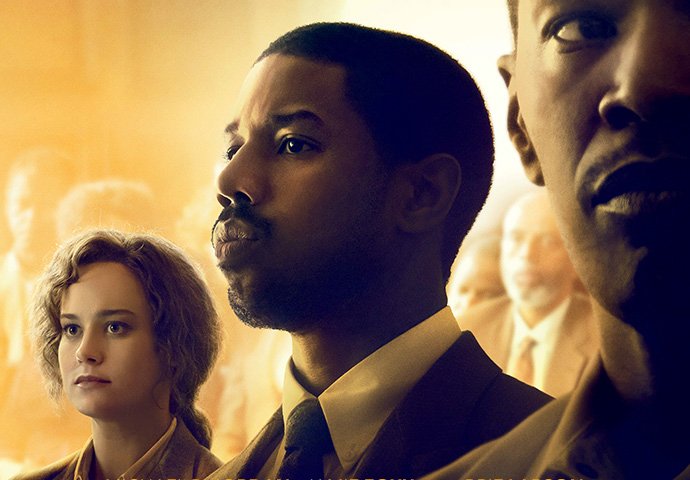 This is not (in my opinion) a good film, but it’s a hard one to criticise – both because it means well and because it comes equipped with cinematic body armour, a five-word shield flashed onscreen right at the beginning: ‘Based on a true story’. A man named Bryan Stevenson (played by Michael B. Jordan) did indeed start something called the Equal Justice Initiative – providing legal services to Death Row inmates – in Alabama in the late 80s, and he did indeed make his name with the case of Walter McMillan (Jamie Foxx), a man convicted of murder despite a rock-solid alibi. If the facts of the case seem unbelievable… well, believe them. It just goes to show that truth is stranger than fiction.

Every knock one could make against the movie – it’s one-dimensional; the hero is too virtuous; the cops and prosecutors are too evil; the defendant and his family are too noble – can be countered by the ‘It really happened’ defence. But truth doesn’t just lie in facts, and a film has to live in the grey areas or it’s not really alive at all. Just Mercy is a deadening experience, a heavy-handed tract and proof, if proof were needed, of the paralysing effect of race in American culture – because of course, even though the EJI defended anyone sentenced to the death penalty in Alabama irrespective of race, the Death Row inmates we meet are all black, and the cops, prison guards and DA are uniformly white.

It wouldn’t take much to lift this story (it’s a potent story, all the better for being true); but it needed something. The 1988 Mississippi Burning, an Oscar nominee in its day, is now often vilified for ignoring blacks in favour of ‘white saviours’ – yet that film made an interesting point, viz. that you have to fight dirty in battling bigotry. There’s another interesting point in Just Mercy, when a local sheriff accuses Stevenson (who’s from Delaware) of being ruled by “your fantasy of who we are down here”. Both those points might’ve made for valuable nuance – yet in fact Bryan’s ‘fantasy’ is absolutely true (if anything, he underestimates how racist small-town Alabama is), and in fact he never fights dirty, quite the opposite.

It’s frustrating watching Jordan – a mercurial, charismatic actor – stuck with playing a wooden character making one high-minded speech after another (“Whatever you did,” he assures his client, “your life is still meaningful”). He’s not even allowed to be devious. You expect him to outsmart the rednecks, or gain inmates’ trust by speaking their language – but no, he just looks concerned and spouts reassuring platitudes; talk about hagiography. Unsurprisingly, the real Mr. Stevenson is also the executive producer.

‘Based on a true story’ is all very well – but why did things happen as they did? Yes, McMillan (who’d spent the whole day at a fish-fry, on the day of the murder) was stitched up by the justice system; the many (black) people who saw him at the fish-fry weren’t called as witnesses, the flaws in the only testimony against him – by a fellow (white) prisoner – weren’t pointed out. But did he really look and sound like wise, dignified Jamie Foxx, surrounded by a loyal, loving family? It’s the same reductive airbrushing you see in period dramas, when for instance Keira Knightley (who moves with the ease and confidence of a modern woman) is told she can’t do X-or-Y ‘because you’re a woman’ – and of course it seems outrageous, then again oppressed women in the 19th century didn’t move or talk like Keira Knightley. Just Mercy tries to expose institutional injustice – a time and place where, if you’re black, “you’re guilty from the moment you’re born” – but falls into the trap of making the victims too noble when they should be damaged, even pathetic. All the inmates are noble here, except the white guy played by Tim Blake Nelson who makes up for it by being a slow-witted, tic-ridden mess. A better movie might’ve made him the defendant.

The film’s only strength lies in its pessimism; it’s a real struggle trying to overturn the conviction. Just Mercy is pessimistic – even cynical – in a larger sense too, ultimately finding Alabama (and, by extension, America) to be just plain racist. The jury’s fear of miscegenation is the real reason for McMillan’s conviction (he was having an affair with a white woman); paranoia about “being safe” – and the legacy of slavery and lynchings – keeps the authorities from admitting their obvious mistake. This is a film for our downbeat times, to be sure – but also a crude, over-obvious, unconvincing film that tries to do too much. It’s against racism, but also against capital punishment – and at one point pauses the plot for an extended, largely gratuitous electric-chair execution scene, the better to Raise Awareness and push the running-time to 137 minutes. Have mercy.