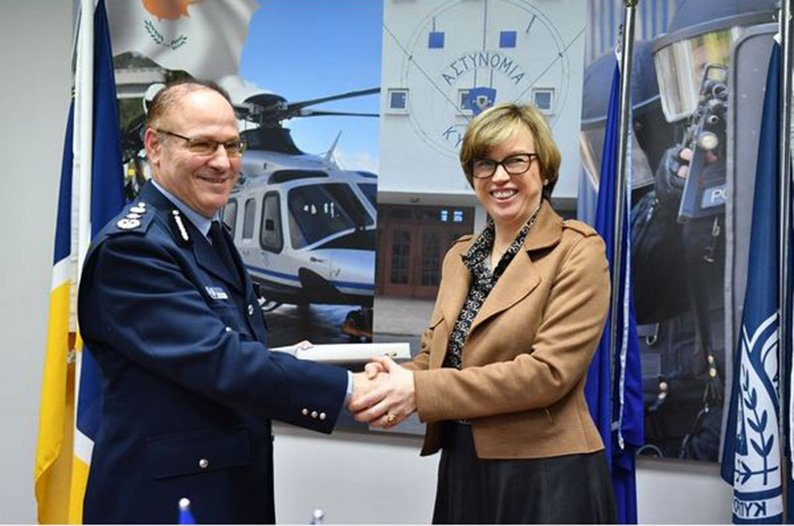 Police Chief Kypros Michaelides on Tuesday said Cyprus needed EU solidarity in combatting irregular migration as this was the only way to effectively manage the phenomenon.

Michaelides was speaking at a joint news conference with the Executive Director of Europol Catherine De Bolle, on a visit to discuss and exchange views on a host of topics.

Michaelides said the challenges being faced in the field of security and in the fight against crime had no borders.

He cited cross-border crime, organised crime, human trafficking and the threat of terrorism. “Cross-border crime is taking on new forms, threatening all European societies and requiring closer cooperation than ever before by member states,” he said.

An issue of growing concern, which was at the centre of his meeting with De Bolle, is the flow of uncontrolled migration by sea and along the buffer zone in Cyprus.

“Migration is one of the issues that most European societies are concerned about, but most of the pressure is on the countries of the European south,” Michaelides said. “Among them Cyprus, especially in the last three years, is facing increased and disproportionate flows.” He added that in 2019 alone, the stream reached a record high, resulting in more than 12,000 new asylum applications.

“For the effective management of irregular migration, we need the solidarity of the rest of the European Union, because only in this way can we be effective in managing the flows,” Michaelides said.

He said Cyprus’ EU membership and its institutional cooperation with Europol had given the police multiple opportunities to combat illegality through the exchange of information, in the organisation of joint missions, in the implementation of legal assistance, in the training of police officers and in leveraging expertise.

But increased migratory flows were “also inevitably linked to issues of public order and security. They also relate to our cooperation with Europol on access to and exchange of information, the decisive fight against trafficking, early warnings and the fight against terrorism.

“I would like to emphasise emphatically that only with the cooperation of the member states of Europe and of the whole international community can the goals of international peace, justice, security and prosperity be achieved,” he concluded.

De Bolle said Cyprus was an important Europol partner in the region and had a very active presence in the organisation.

On migration, she said the work of the Cyprus police in safeguarding the external borders of the European Union was “extremely important for the security of the entire Union. Europol is here to support Cyprus in its work and we are proud to offer this support,” she said.

“We also support Cyprus’ efforts in stopping organised crime networks related to the illegal trafficking of migrants and the prevention of terrorism,” she added.

The Europol official also referred to the fact that two experts from the organisation had been sent to the island for support.

Savvides also raised the spectre of irregular migration saying Cyprus was on the front line “and receiving the highest number of irregular migrants and refugees ever in relation to its other European countries”.

He said they had discussed the role that Turkey could play in reducing migration flows in cooperation with all EU member states, including Cyprus.

Nouris added: “We have highlighted the issues that concern us: the very large migration flows we have in Cyprus, especially the illegal flows mainly from the dividing line. And of course, we have discussed the maximum assistance Europol could offer us in terms of controlling migration flows, but much more in terms of security. The Republic of Cyprus needs the full support of the European Union, of all relevant actors active in the field, one of which is Europol, to tackle the problem of migration.”