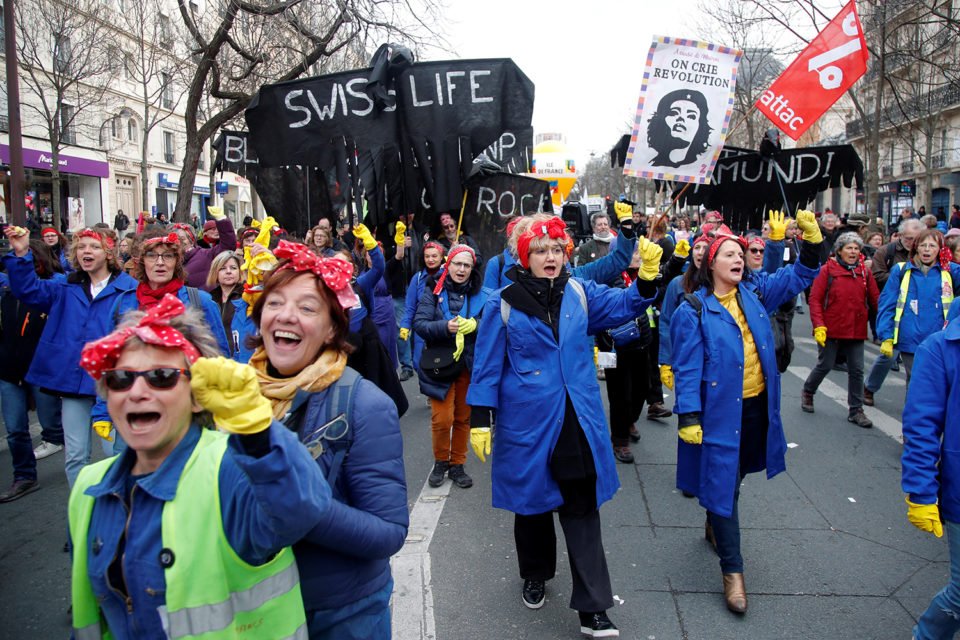 Feminist activists attend a demonstration against French government's pensions reform plans in Paris as part of another day of nationwide strikes and protests in France, January 29, 2020. REUTERS/Charles Platiau

Going with the Bible, we females weren’t the first twinkle in God’s eye when the deity decided to form human beings. We were a second thought, a spare rib in fact. And since that idea took hold that’s where a lot of men think we belong, a useful creature to have around for sex, birth and taking care of their children, and them when they grow senile.

However, somewhere along the way, Man discovered that women can actually do most things men can do. Sure, we don’t have their muscles, but gifted women have as much intelligence as men who attain high achievement. We don’t all have the same abilities but we should be given the same opportunities if we are capable of doing the same job and with that goes the same salary.

Women have long battled for recognition and there are wonderful men who don’t begrudge us success or want to keep us in our place – under their thumbs. Women have proved their equality, they drive enormous trucks, fly planes, are high ranking soldiers or police officers, politicians, go into space or work in its related professions, and they show big business that it’s their business too. Female journalists cover dangerous war zones alongside male colleagues, women succeed in fields of science and medicine and even stand up to movie moguls.

Yet the struggle to be taken seriously in some quarters goes on. Thinking over the crimes against foreign women in Cyprus, how ironic it is we proudly lay claim to Aphrodite, our favourite icon, Goddess of Love and Beauty who, according to myth, was no shy primrose. Yet that never lessened her appeal for Cypriots. What if she were called the Goddess of Equal Opportunity Sex? It’s hard for some men who regard themselves as ultra virile, to accept that women can have similar appetites and want sex on a regular and perhaps casual basis. Foreign women have, for as long as I’ve lived here, been regarded as easier than Cypriot women, looser with our favours.

Young folk are beginning to look at life and relationships differently to their elders and can be more tolerant, but it takes time to change the narrow-mindedness of some people. The women who tragically met serial killer Nicos Metaxas had intimate relations with him. That was their own adult business. The young UK teen was having sex with an Israeli lad and that was her personal business – until he decided to share that intimacy with his pals. He reportedly allowed them to intrude without her consent. Did he think because she agreed to have sex with him that she wasn’t worthy of respect as an equal partner, or was he just a spoiled man-child more concerned with showing off than behaving like a well mannered man?

There are men of the opinion that as the women above were ‘easy’ they more or less asked for trouble. On Facebook the teen was referred to by one man as a ‘slapper’. Rape cases the world over are often hard to prove and the way in which the case here was handled is a fine example of why so many women don’t report rape. The victim at times is treated as suspect; particularly if it emerges she has had an active sex life. Attitudes then rearrange themselves and the question arises as to whether the act was in fact consensual.

We’ve been the planet’s dominant species for a long time; we’ve come far but in certain ways are still backward. Fires ate Australia, its people and unique species alive. Floods recently inundated crops in Cyprus; the oceans are full of our thrown away crap. We are a wasteful, careless pack of creatures that 30 years ago should have woken up to see that our pretty blue planet is ailing; we need to take care of it and each other.

My pal (Cannabis) Maari says we once lived on the moon, made it desolate and who knows how many planets before that. She believes Christ was an alien and that’s why we look yearningly at the stars and build monuments to what is above us, awaiting a return visit. Now and then, she says, the alien mothers or fathers prod a voice to remind us of our inability to learn from past mistakes, a voice ignored at times but persistent and eventually proven correct. Maari, drag-fag aloft sighed, ‘In our day it was Jacques Cousteau, now it’s young Greta Thunberg. I know she’s a handful, but she was born with a built-in challenge to her personal life, tackled it, harnessed it and became the planet’s warrior. Doesn’t she make you feel you were an irrelevant teen?’ And how!