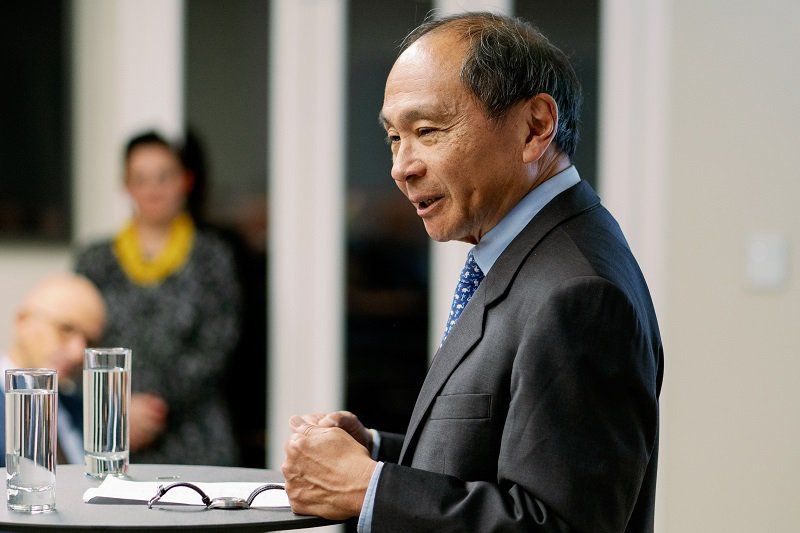 From the fall of the Berlin Wall and the USSR to the rise of Trump and Orbán – how did we get here?

In an evening dedicated to the central theme of his latest book, ‘Identity: The Demand for Dignity and the Politics of Resentment’, Dr. Fukuyama explored the concept of modern identity and the key role that it has played in recent extraordinary political developments – including Brexit and the rise of Trump, Orbán and Duterte.

Following an introduction by Mr Andreas Hadjikyriacos, Managing Director of GNORA Communications Consultants, Dr Fukuyama provided an in-depth analysis of the current status of democracy in the face of a rising global middle class and what he considers to be the West’s deep-rooted political paralysis.

Circling back to Cyprus, the significance of identity politics to the island’s own recent history and its two communities was further explored by the audience during the lively Q&A session which followed. Asked how Cyprus can influence its history in order to give a more holistic picture which would facilitate unification, Dr. Fukuyama responded:

Dr. Fukuyama concluded the evening by emphasising the need for leaders who do not exploit divisions but understand the importance of unity for society as a whole.

Founded in 2018 in Nicosia by Phoenix Leaders, The Club is Cyprus’ first private members club and combines modern and agile working spaces with intimate events offering Members the opportunity to meet international leaders from a range of sectors and industries. Set against the backdrop of the scenic Presidential Park, The Club is a unique space which connects both established and emerging members of the local business community allowing for a modern style of networking and professional collaboration.

Founded by Valentina Kislaya in 2015, Phoenix Leaders is a leadership and executive training consultancy, which works with both existing and future leaders to challenge their leadership styles, and develop the skills and mental resilience they need to thrive in today’s fast-paced environment.

Our expert team understands that in order for leaders to respond successfully to the demands of their roles and the continuously evolving marketplace in which they operate, executives require training tailored to their own individual situations.

We use business psychology, corporate experience and neuroscience to build our training sessions, tailoring the courses to fit our clients’ vision, values and strategy.  As such, every training is slightly different, delivered in-house and shaped to fit the needs of our clients’ organisation and team.