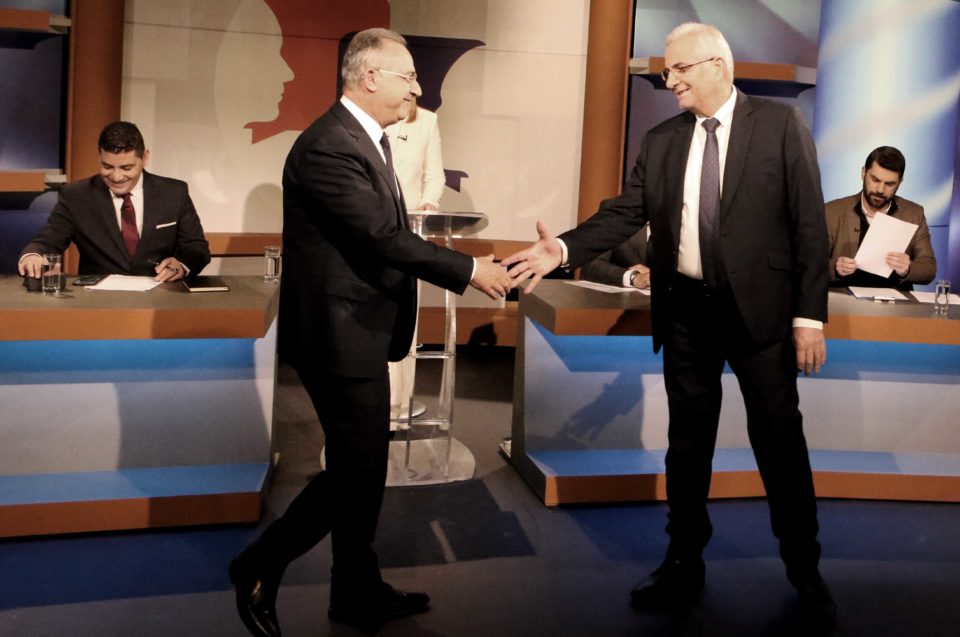 Ruling Disy and Akel clashed on Thursday about the non-performing loans held by politically exposed persons (PEP) during a televised political debate.

Akel leader Andros Kyprianou challenged his opponent, Disy chief Averof Neophytou multiple times to reveal “which politician went to the bank for the loan restructuring for a private company” after Neophytou insisted “everything should come to light” with the help of a forensic investigation.

Kyprianou said he had never intervened with a banker as he is not used to talking to bankers.

“Our country has a huge problem with corruption and this is demonstrated by surveys by foreign organisations such as the IMF and the World Bank,” he said. Kyprianou said it was Disy’s right put forward a proposal for a House audit, but he argued that the problems of corruption were much wider.

“All details concerning Akel’s loans from 2013 were already published,” he said, and the progressive party had nothing to hide. Neophytou said the ruling party never helped write off any loans and said the whole truth regarding NPLs should be revealed.

The heated debate took place on live TV at 12.30am on Thursday after the initiative by Neophytou to take on the Akel leader in an exchange of tweets in recent days.

Five journalists from different Cypriot television media had the opportunity to ask the two politicians questions about the Cyprus problem, foreign policy and energy, while the second part included questions about internal governance, economy and non-performing loans.

The debate was coordinated by Gogo Alexandrinou from Cybc, who highlighted the issue of non-performing loans (NPL) as a topic of discussion. Four other journalists participated: Kyriakos Pomilorides from Ant1, Sigma’s Christos Charalambous, Thanasis Athanasiou from Mega and Andreas Kimitris from Alpha.

Kyprianou clarified his position from the start saying he was informed the discussion would be of a general nature and not focused on the politicians’ non-performing loans.

They both agreed on the need to focus on talks for a solution to the Cyprus problem.

Turkey would stop invading the island’s exclusive economic zone when the leaders of the two communities started discussions for a solution, they both said. However, they disagreed on who was to blame for the current stalemate.

Neophytou solely blamed Turkey’s provocative attitude while Kyprianou, recognising Turkey’s interference, also pointed the finger at the lack of communication between the leaders of the two communities, and the lack of a comprehensive strategy by the government.

“If President Anastasiades is to blame for the Cyprus problem, why wasn’t it resolved when [Akel’s former president Demetris] Christofias was leading the country?” Neophytou asked after Kyprianou mentioned the UN Secretary-General’s report on the negotiations in Crans-Montana in the summer of 2017 when the talks collapsed.

The report, referring to the 2017 talks between Anastasiades and Turkish Cypriot leader Mustafa Akinci placed responsibility on the two sides for the failure of the negotiations. The government blames Turkey, which also participated in the Swiss talks on security and guarantees.

If substantive negotiations were moving in the right direction, Akel would support the effort, Kyprianou said but a comprehensive strategy was lacking. He also accused Neophytou of distorting what he says.

He referred to statements made by Anastasiades before and after the presidential election, which, he said, refer to the acceptance of two separate EEZs, while also referring to the public debate on a two-state solution. Asked if the president discussed with him a two-state solution or a confederation, Neophytou said it would be a national disaster for the Cypriot side to show to the international community that it was abandoning the agreed framework for the solution of the Cyprus, a bi-zonal bicommunal federation.

The Disy leader also said the stagnation in the Cyprus issue was not due to the Greek Cypriot side. “We must remain committed to the bi-zonal bi-communal federation. If we depart from it, we will experience new adventures and tragedies,” he said.

Discussions also turned to the citizenship by investment scheme, for which Cyprus has come under fire for selling passports to suspect individuals and for the president’s use of a private jet by a Saudi beneficiary of the scheme whose aircraft is permanently stationed at Larnaca airport. Defending, Neophytou said: “The state saved more than €3.5 million]”. In reply, Kyprianou reminded the Disy leader that the president was not allowed to accept a gift worth more than €150.

It’s all a matter of time management