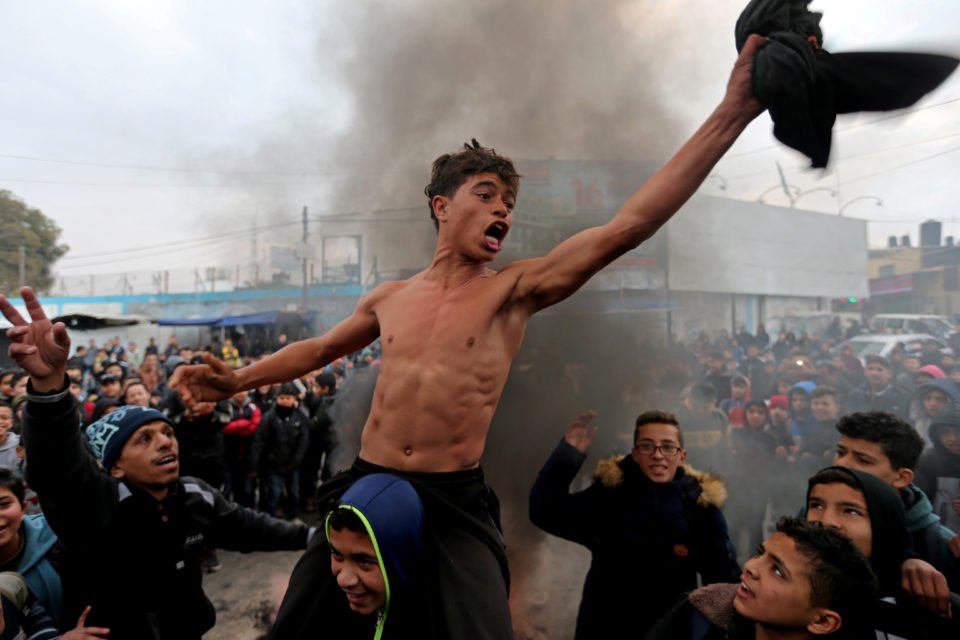 A car ran down a group of Israeli soldiers in Jerusalem early on Thursday in a suspected Palestinian attack and, in a separate incident, Israeli troops shot dead a Palestinian during clashes in the occupied West Bank, authorities said.

Long-simmering Palestinian unrest has been stoked anew by anger at U.S. President Donald Trump’s Middle East peace plan, which was embraced by Israel and rejected by the Palestinians when it was announced last week.

The Jerusalem car-ramming took place on David Remez Street, which is close to the Arab neighbourhoods of eastern parts of the city that Palestinians want for a state. A theatre and late-night restaurants and bars are also located along the street.

A military spokeswoman said 12 soldiers were injured. They were sight-seeing after coming to the city to be sworn in upon completing basic training.

The Magen David Adom ambulance service said a total of 14 people were injured, including one admitted to hospital with severe injuries and another with moderate injuries.

“The incident is being investigated as a terror attack,” a police spokesman said. The driver was still at large.

“It is just a matter of time – and not much time – until we get our hands on the attacker. Terrorism will mot defeat us, we will win,” Israeli Prime Minister Benjamin Netanyahu said in a statement.

In the West Bank city of Jenin, a 19-year-old man was shot dead by troops while throwing rocks at them, Palestinians said.

An Israeli military spokesman said troops came to Jenin to demolish the home of a Palestinian who was involved in the 2018 killing of a Jewish settler. Troops opened fire at Palestinians who shot and threw bombs at them in Jenin, the spokesman said.

Palestinian medics said a Palestinian police officer was also seriously wounded by Israeli gunfire in the incident. The military did not immediately comment on that account.

On Wednesday, Israeli troops shot dead a 17-year-old Palestinian elsewhere in the West Bank, saying he had thrown a fire-bomb at them during a violent protest against Trump’s peace plan. He was the first fatality since Trump’s plan was unveiled.

There have also been several days of violence across the border with the Gaza Strip. Palestinians have launched mortar shells, rockets and balloon-borne explosives into Israel, causing panic but no serious casualties. Israel has carried out nightly air strikes against sites belonging to Gaza’s ruling Hamas Islamists.

“The spreading resistance and clashes by our people in the West Bank and their resistance in the heart of occupied Jerusalem is an active response against the destructive Trump deal,” said Hamas spokesman Hazem Qassem.

The Palestinians, who have long shunned the Trump administration, accusing it of bias towards Israel, say the peace plan falls far short of their demands for territorial and other rights. Washington deems many of those demands unrealistic.

Israel supports the Trump plan, which would give it much of what it has sought for decades, including sovereignty over nearly all the occupied land on which it has built settlements.

Facebook did not do enough to fight discrimination says audit report