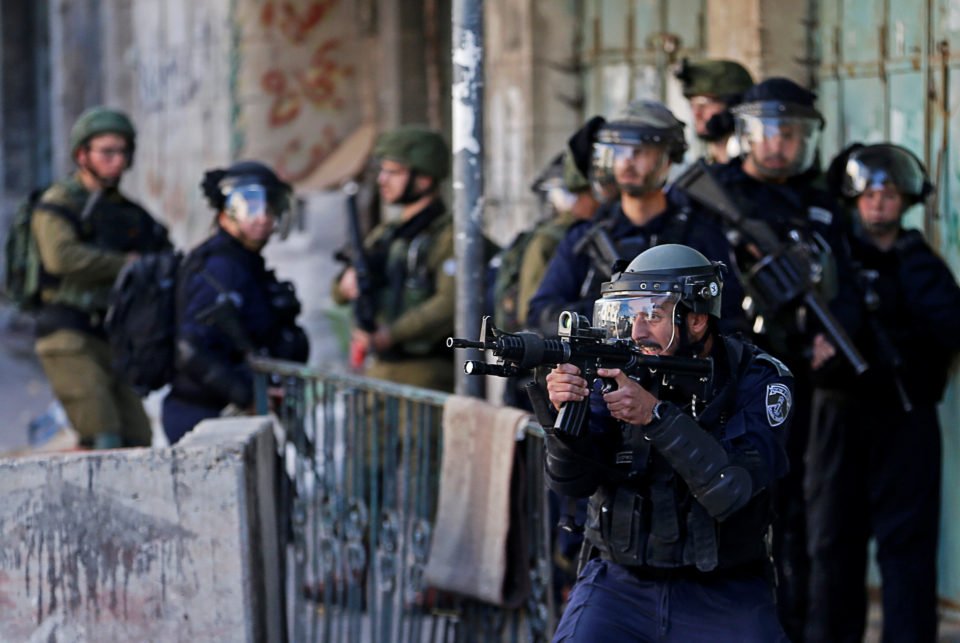 Israeli troops take their position during a Palestinian protest against the US President Donald Trump’s Middle East peace plan, in Hebron in the Israeli-occupied West Bank

At least two Palestinians were killed and 16 Israelis hurt on Thursday in a surge of violence in Jerusalem and the occupied West Bank, where Palestinian anger at a US peace plan is high.

The proposal announced by US President Donald Trump would give Israel most of what it has sought during decades of conflict, including the disputed holy city of Jerusalem and nearly all the occupied land on which it has built settlements.

In the West Bank, Israeli troops shot dead two Palestinians, one during violent clashes, and an Israeli soldier was slightly wounded in a drive-by shooting, authorities said.

In Jerusalem, a car ran down Israeli soldiers, injuring at least 14 of them.

“It is just a matter of time – and not much time – until we get our hands on the attacker. Terrorism will not defeat us, we will win,” Israeli Prime Minister Benjamin Netanyahu said in a statement after the Jerusalem incident.

In a separate attack at the entrance to Jerusalem’s walled Old City, a gunman, identified by Israeli security officials as an Arab citizen of Israel, slightly wounded a paramilitary border policeman before being shot dead.

In the West Bank city of Jenin, a 19-year-old man was shot dead by troops while throwing rocks at them, Palestinians said.

An Israeli military spokesman said the incident occurred after soldiers came to Jenin to demolish the home of a Palestinian who was involved in the 2018 killing of a Jewish settler.

Palestinian authorities said another Palestinian man, a police officer, had been killed at a Jenin police station by Israeli gunfire. Israeli officials did not comment and it was unclear whether that incident was directly linked to the clashes in the West Bank city.

On Wednesday, Israeli troops shot dead a 17-year-old Palestinian elsewhere in the West Bank, saying he had thrown a fire-bomb at them during a violent protest against Trump’s plan. He was the first fatality since the plan was announced.

Palestinian President Mahmoud Abbas condemned Israel for the deaths, linking them to what Trump has billed as the “deal of the century”.

The Palestinians, who have long shunned the Trump administration, accusing it of bias towards Israel, say the plan falls far short of their demands for a viable independent state and other rights.

Israel supports the Trump plan, which would give it much of what it has sought for decades. The Arab League oppose it, while the European Union has also rejected parts of it.

“The deal of the century caused such escalation and tension by trying to impose fake facts on the ground,” Abbas’ spokesman Nabil Abu Rudeineh said.

“We have repeatedly warned that any deal that doesn’t answer the minimum of Palestinian rights and that doesn’t aim to make a just and lasting peace will definitely lead to the tension we are witnessing today.”

The Israel-Gaza border has also been shaken by several days of violence.

“The spreading resistance and clashes by our people in the West Bank and their resistance in the heart of occupied Jerusalem is an active response against the destructive Trump deal,” Hamas spokesman Hazem Qassem said.

A discussion with Dr. Fukuyama at The Club, Nicosia

Attempted murder suspect held over for trial next month