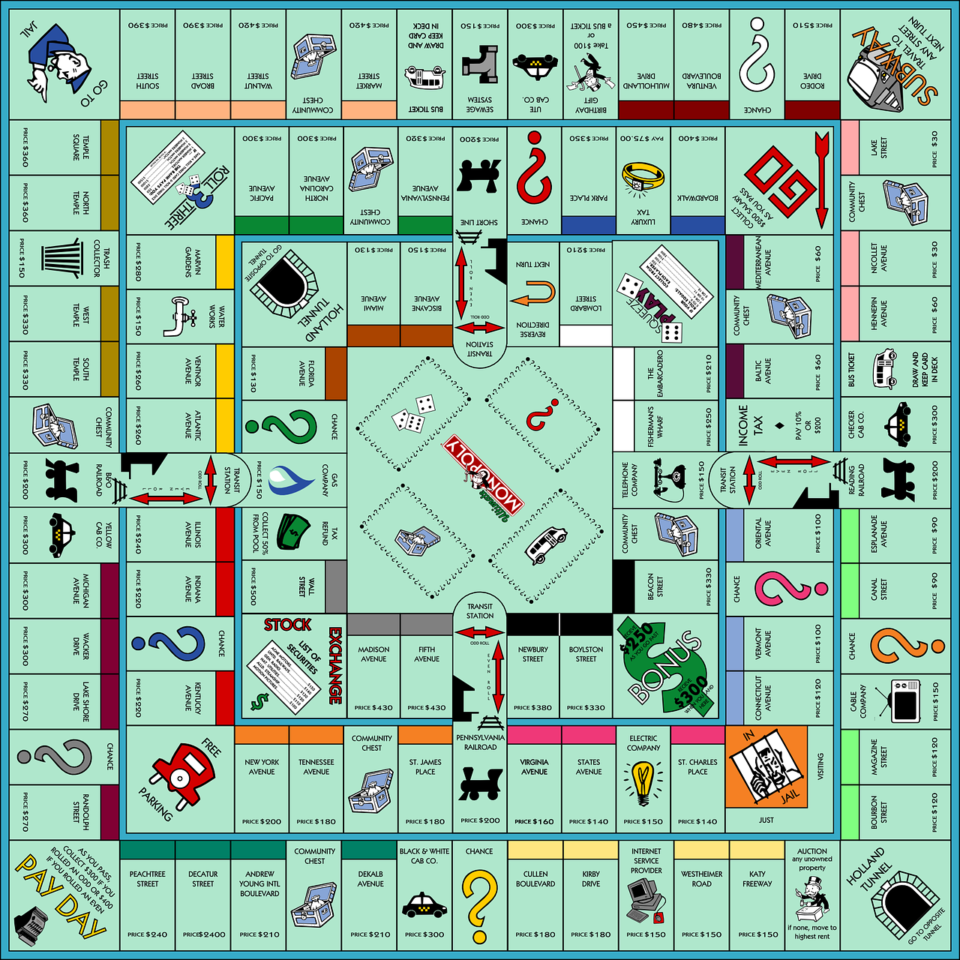 Oh the irony, the cruel, cruel irony, that a game invented to warn of the dangers of predator capitalism, should become the victim of an intellectual theft worth millions of dollars.

In 1904, Illinois-born Elizabeth Magie patented The Landlord’s Game – a board game centred on rents, mortgages, properties and realties. There were four railway stations, water and electricity franchises, and a jailhouse supervised by the villainous English aristocrat, Lord Blueblood. The only way out of jail was to pay a fine, or – stop us if you’ve heard this one – roll a double.

An educated, opinionated, and financially self-sufficient stenographer who did not marry until her mid-Forties, Magie had strong left-wing principles, and railed against the Rockefellers and Carnegies who, in her mind, were growing fat off the working man.

Her game was intended as a parable, a case study in systemic unfairness, in which land-grabbing plutocrats could freely cheat, extort, and grind their opponents into the dust. “Children of nine or 10 can easily understand the game,” she said. “let them once see clearly the gross injustice of our present land system, and when they grow up, if they are allowed to develop naturally, the situation will soon be remedied.”

The game enjoyed moderate success – mostly on college campuses, and among the political left.

Fast forward to 1935, and a very different tale emerges. The story, printed alongside the game’s instructions in later editions, was that Monopoly emerged from the ashes of the Great Depression, the brainchild of down-on-his-luck Philadelphia native Charles Darrow.

Through a mixture of wit, wisdom and the American Dream, Darrow masterfully conceived a game that would lift him out of poverty, and wind up on the shelves of millions around the world. There were four railway stations, water and electricity franchises, and a jailhouse, from which one could escape by rolling a double.

You don’t need to be a genius, or even a landowner, to work out what happened. Magie’s game had been pilfered, and the rebrand contained, in her own words, “nothing different under the sun”.

She wasn’t quite right. Gone was the satirical pessimism of The Landlord’s Game, in its place a more corporate sensibility, overseen by the now-iconic Monopoly Man. Mustachioed, portly, and clad in top hat and tails, the character was officially named Rich Uncle Pennybags, and bore a suspicious resemblance to billionaire financier JP Morgan.

Whether you cite sexism, copyright law, or simply that history is written by the winners, Monopoly’s original inventor still gets little credit for her creation. Darrow became the first ever millionaire game designer; Magie died in 1948, unheralded and extremely annoyed.

Questionable though his legacy may be, there’s no doubting Darrow’s design is the one we play today. He fashioned the first board from a disused oilcloth, carved houses and hotels from scraps of wooden moulding, and produced chance cards that were written by hand.

The classic counters – battleship, race car, thimble, top hat – were derived from a charm bracelet worn by Darrow’s niece, while the all-caps word ‘MONOPOLY’ has enjoyed the same spot on the board for the last 85 years.

Darrow learned of The Landlord’s Game at dinner with friends in 1933, but despite the road-tested rule-book, it took him two years to see his version to sale. His first pitch was turned down by Boston-based games manufacturer Parker Brothers, and it took them a year to overcome concerns around the game’s length and complexity.

Darrow’s first Monopoly set centred around Atlantic City, New Jersey, but the first licensed creation focused on the historic streets and squares of London, and the game was an instant hit both sides of the Atlantic.

Though its ability to spark family arguments is matched only by Bridge, the game proved an exercise in wish-fulfilment for societies still reeling from the Wall Street Crash. In Monopoly, prosperity was just a roll away, and destitution lost you nothing more than pride. Today, inflation has dampened the fantasy, as a standard set has a total bank of just $20,580.

By 1938, Monopoly had already spread to Chile, Australia, and Nazi Germany, where it played an intriguing role in the Second World War. Despised by the Hitler Youth for being ‘too Jewish’, it’s said that the game was used to smuggle supplies into some Prisoner of War camps via fake charities operated by the UK government. The sets contained nail files, compasses, silk-printed escape maps, and ‘Monopoly money’ suffused with real bills.

Monopoly was similarly controversial in Cuba, where Fidel Castro ordered every set destroyed shortly after rising to power. Given Magie’s thoughts on private land ownership, the irony is palpable.

The many faces of Monopoly

There are a few games – Scrabble springs to mind, as does Cluedo – which possess such strong central concepts that they don’t need to evolve to survive. By 1974, Parker Brothers had sold more than 80 million near-identical sets of Monopoly, and took the view that if it’s not broke, don’t fix it.

With the gameplay unchanged, developers had to look elsewhere for extra mileage – and they found it designing themed editions in a range of visual styles.

Cities from Barcelona to Swindon have snagged their own versions, and there are now ‘world’ editions in which players pile up skyscrapers on megacities. In 1988, San Francisco jeweller Sidney Mobell set a Guinness World Record for the most expensive edition ever made. His $2 million, 23-carat gold set sported 165 rubies and sapphires, and 21 full cut diamonds on each die.

The counters have gone through similar permutations, and the changes have become a matter of public record. On two occasions, tokens have been replaced via public vote, and the current set includes a penguin, a rubber duck, and a tyrannosaurus rex. Pity the sack of money: The shortest-lived token, it debuted in 1999, and was gone by 2007.

Outside the boardroom, the game’s global fan base has turned Monopoly into a spectator sport. To date, there have been 14 Monopoly World Championships, most recently in Macau in 2015, contested by national champions put forward by regional Monopoly authorities. Japan and Italy are perhaps the world’s premier Monopoly nations, as both have brought the title home twice.

Parker Brothers was acquired by Hasbro in 1991, and Monopoly’s new paymasters have proven slightly more willing to experiment with the formula. In 2018, Hasbro released the Monopoly Cheater’s Edition, perhaps the most ambitious incarnation to date, in which players can steal bills and skip rent under the tagline: ‘How much can you get away with?’

If the history of Monopoly is any guide, the answer is quite a lot.

AG: a stay on criminal proceedings against former top cop is not a dismissal