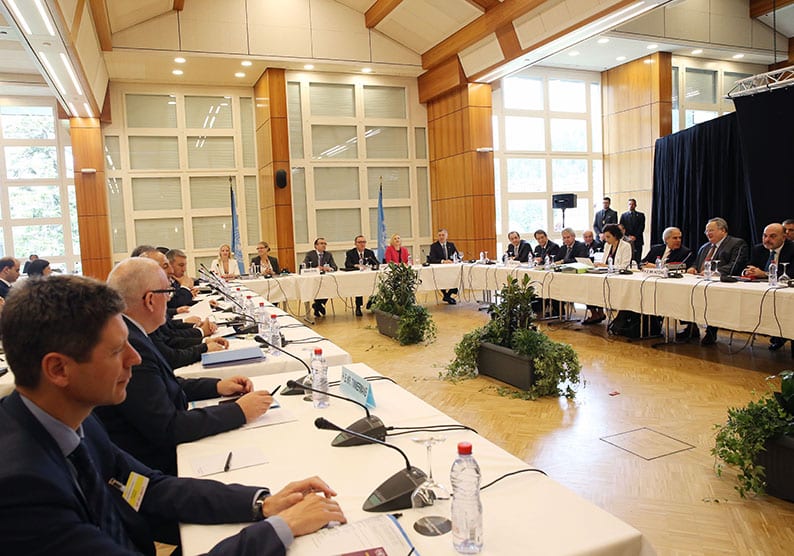 Negotiations at the Swiss resort of Crans-Montana in the summer of 2017 brought both sides in Cyprus to the brink of a settlement, according to former Assistant UN Secretary-General for Political Affairs Jeffrey Feltman.

At the same time, he said, whether for the Greek Cypriots it be Turkey and Cyprus’ EEZ, or for the Turkish Cypriots, political equality, neither side should look for excuses not to move forward.

In an interview with Politis on Sunday, Feltman who was on the front lines in Crans-Montana where the talks ultimately collapsed said, according to a translation from Greek, that instead of dwelling on political and legal issues and security issues that could be described as “minefields”, the leaders of the two sides, and the guarantor powers had “tackled the most serious issues with unprecedented responsibility.”

“Even if there were some issues that remained unresolved, the importance of which I would not want to underestimate, the impression of UN officials, including myself, was that Crans-Montana brought both sides and the guarantors to the limits of the solution,” Feltman said.

“I remember a meeting on the first day, attended by both leaders and representatives of the guarantor powers when tensions in the room escalated and reached the brink of explosion as they discussed security issues. But the discussions continued and the diplomatic explosion did not take place – again we must credit the seriousness with which all the participants, especially the leaders, dealt with the talks,” he added.

He noted, however, that after several intense rounds of discussions and speaking with leaders and guarantors, the UN Secretary-General realised that the talks had gone as far as they could go and “how continuing with them would not only not bring the results we hoped for, but would be counterproductive as nervousness increased and interpersonal relationships, which were then good, showed signs of fatigue,” he added.

Feltman, who retained his UN position until 2018, said that for some, the status quo may seem more viable and comfortable than it should be, while a settlement could be considered ‘a leap of faith’ into the unknown.

He said that what concerned him most was that during the aftermath of Crans-Montana in July 2017, there was a challenge “by some of the parties” to the earlier decision to seek a solution that reunites Cyprus on the basis of a bi-zonal bi-communal federation with political equality.

“I can only wonder what they think would be the preferable solution that could be achieved peacefully by satisfying the expectations of both communities in Cyprus or elsewhere who dispute this approach. Clearly, the United Nations will support whatever option the two communities want, but at this point I really see no better alternative to the goal that the leaders themselves have come up with what it should be,” he said.

Feltman said what the sides should do is to use the “trust but verify” principle that guided Reagan and Gorbachev in achieving US-Soviet rapprochement in the 1980s.

“Although we can take into account many factors, the absence of a solution to the Cyprus problem cannot and should not be attributed to the lack of serious effort. Leaders and negotiators from both communities, along with UN envoys and others, have dedicated time, energy and creativity to trying to make progress,” the former UN official said.

“The seriousness with which the leaders and their teams, as well as the guarantor forces, dealt with the issues always impressed me, especially compared to some of the other peace processes I participated in.”

However, Feltman said that as an external observer, the process was often distracted by the intensity of disagreements over issues that seemed to him meaningless, but it was also natural that each side was constantly on the defensive against any challenge to its narrative, he said.

Asked about the hydrocarbons’ dispute, Feltman said: “Is it really more important for the parties to enter a political competition through exploratory drilling than to find a solution through which the overall perspective of a united Cyprus can be realised? The gas is not going to disappear, and I hope that the drilling competition will not eliminate the possibility of a solution to the Cyprus problem.”

To a question on Turkey’s stance on hydrocarbons and its perceived desire to control energy in the region, Feltman said his concern was that such statements come from genuine fears but are a the same time used politically, precisely to avoid pressure for a solution to the Cyprus problem.

He added that having seen the seriousness of the two leaders, guarantors and their teams in Crans-Montana, he did not accept that the attempt at a solution was as hopeless as the two parallel positions imply.

“The concerns of the Turkish Cypriots about their role in a united Cyprus is understandable as well but they too should not approach the problem in search of excuses,” he said.

Feltman will be one of the keynote speakers at the international Delphi Economic Forum, which will be held in Greece from March 5-8.

Nicosia’s bicommunal cockerel with a flock of fans (with video)