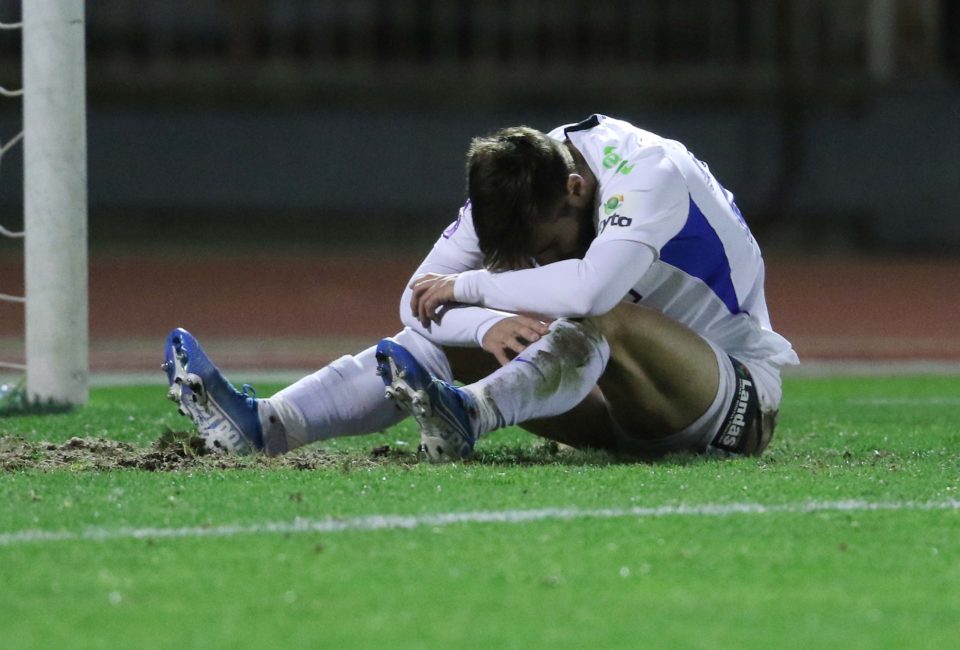 It was a weekend packed with huge shocks in the Cyprus football championship as the top four teams all lost to ‘inferior’ opposition.

Anorthosis, Omonia and Apollon were beaten by teams facing the threat of relegation, Olympiakos, Ethnikos and Enosis respectively, while Apoel lost to 6th placed AEK in Larnaca.

The first team to trudge off the field red-faced were leaders Anorthosis, who went deservedly went down 2-1 to Olympiakos, who before the game were hovering dangerously just above the relegation zone.

Olympiakos had already defeated Apoel with relative ease a few ago but Temur Ketsbaya’s side did not heed the warning as they appeared lethargic and bereft of attacking ideas.

After a cagey opening half hour Olympiakos opened the score after Papadopoulos’ parried save came off the back of his skipper Gordon Schildenfeld to nestle into an empty net.

Anorthosis could not find an answer to the home side’s robust defence with Olympiakos always looking dangerous on the break.
Olympiakos doubled their lead in added time after Psaltis finished off a fine move before Mikael Duris pulled a goal back for the Famagusta team with virtually the last kick of the game.

Apoel began their game in Larnaca knowing that a win against AEK would put them just two points of the top.
However it was not to be. After another shambolic display where they hardly tested AEK goalkeeper Tonio they lost to a Hector Hevel goal scored just after the half hour.
The scoreline flattered the champions as AEK should have made sure of the three points before the teams went in for the half-time break.

What should be worrying for Apoel is not that they lost to AEK, a team that always features in the top six in recent years, but their inability to create any goal scoring opportunities and the fact that their top scorer is a central defender with six goals.

On Sunday Omonia were expected to sweep aside Ethnikos Achnas and overtake Anorthosis at the top of the table.
Omonia though were wasteful in the final third and as time ticked down, the pressure began to show. The visitors began to grow in confidence and venture forward with intent.

Ethnikos took the lead on the hour mark after Christophi found a way to chip Omonia’s 6 ft 8in goalkeeper Costel Pantilimon from the edge of the box.

Omonia replied 15 minutes later from the penalty stop through Matt Derbyshire but Ethnikos regained the lead almost instantly after Markovski was bundled over in the box. He picked himself up and beat Panitlimon from the penalty spot.

Everything seemed to be going Apollon’s way and they kicked-off their game against Enosis Neon Paralimni a few minutes after Achna’s triumph.
A win for the Limassol side would have put them five points off the top with a game in hand.

It was a rather uninspired performance by Apollon who needed more than 40 minutes to create their first goal-scoring opportunity.

Enosis were sharp in attack and could have opened the score just before the half hour mark but Varela’s goalbound effort was beaten away by Apollon goalkeeper Moll.
Despite dominating play in the second half Apollon were unable to break down Enosis’ backline and the few times they did they were unable to beat goalkeeper Kleyman.
In a rare counter attack Varela made amends for his earlier miss and scored the only goal of the game in the 72nd minute to the disbelief of the home crowd.

In the final weekend game, Pafos Fc defeated AEL 2-0 thanks to goals by Denis Rakels And Antonio Felix.

A rooster in old Nicosia