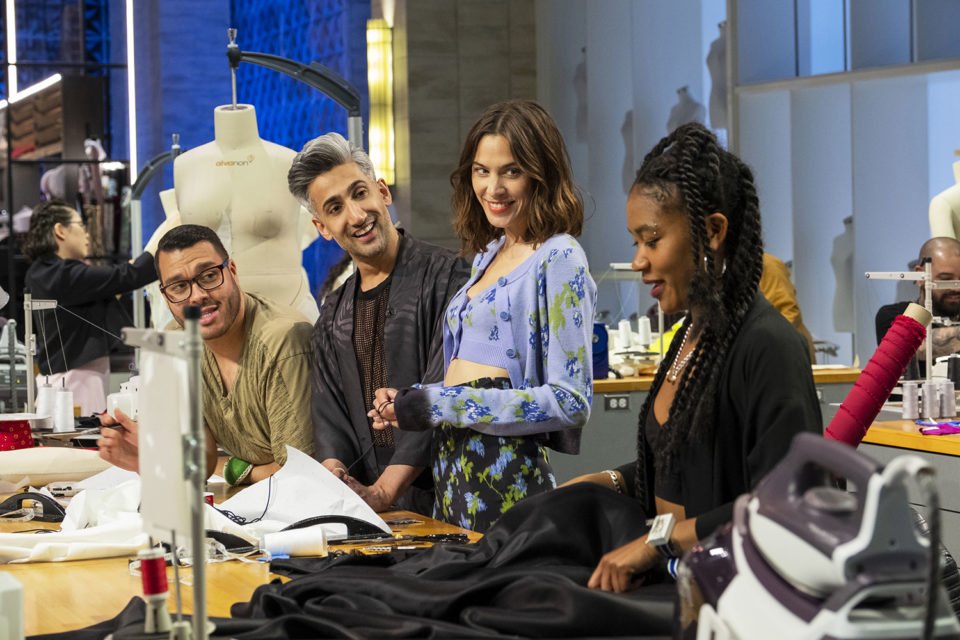 Alexa Chung is returning to her presenting roots focussing on her favourite pastime, fashion. And having secured her status as a global icon in the style stakes, she couldn’t be happier. “My life had become more entrenched in the fashion industry,” she explains.

“I was invited to collaborate with a lot of brands and I was enjoying that aspect, and writing for Vogue, and doing other bits… Then I started my fashion line [ALEXACHUNG], so that was the focus and took all of my time – and still does.

“I had been offered things,” she muses of her TV hiatus. “But nothing that was compelling enough that I said ‘Yes’ – until now, because [this format] seemed to dovetail my interests.”

The show in question is Next In Fashion, a high-stakes competition series featuring some of the world’s best and quietly innovative designers who compete for a chance to become the next big industry name.

Already on Netflix, the 10-parter is hosted by Chung and designer and TV personality Tan France (better known as one of the so-called Fab Five on Netflix’s reality series Queer Eye).

It’s a union that owes thanks to a swanky London fash-pack party, no less.

“I bumped into Tan at a party,” she says with a big grin. “I was really letting loose because it was my fashion show the day before, so I’d completed this runway show and I guess I was elated.

“When Tan walked in I just screamed – I love him and I’d just been watching Queer Eye,” she explains.

“He heard me and so I ducked under the DJ booth and said to my friend, ‘Oh my God, how embarrassing!’. And then he came over and that’s how we met.

“I think she was too drunk to realise I was saying it,” Tan interrupts.

Just over a year later and all is well, as the British hosting duo welcome 18 designers, each set to face challenges that centre on a different trend or design style that’s influenced the way the entire world dresses.

Far from amateurs, these talented contestants – who’ve worked for major brands and dressed A-listers – will go head to head to see who has the skill, originality and determination to win the grand prize of $250,000 and an opportunity to debut their collection with luxury fashion retailer Net-a-Porter.

Hailing from all over the world, viewers can expect to see work from the likes of, among others, Adolfo Sanchez, a Mexican-American designer specialising in evening wear and bridal; UK-based Claire Davis, who is exploring eco-friendly fashion; and Korean designer Minju Kim, who works on contemporary womenswear.

“Netflix is a global platform and it made sense to make sure that this was a global competition show,” comments France on its international appeal.

“It makes for a much more interesting show if it’s not just American contestants.”

So what’s essential to great design, in their opinion?

“Energy,” Chung offers simply. “They’re obviously very fatigued as the finishing line gets closer, but you have to still attack it with the same amount of energy as you start the project with. If you lose focus, you lose it,” she warns.

“We’re not asking them to make regular clothes, we need something that’s going to really impact on the runway,” France adds.

“I think we’ve done a lovely job of – not we, the designers – creating looks that the audience is going to be obsessed with.”

“Are there some people who were incredible but just caved under the pressure? Yeah, absolutely,” he confides. “I couldn’t do it, there’s no way I could do that show.”

As with any contest, it’s an emotional ride for all, he empathises.

“I used to be a designer, and a struggling designer, and Alexa is a designer also, so we know the pressure of this game – it’s not like we’re coming from a position where we don’t get it,” France says.

“It was hard letting people go knowing that they’re so dedicated to what they do,” he adds.

“It’s knowing that could be a life-changing amount of money and opportunity, and then feeling the responsibility of that,” Chung concurs. “It was tough.”

As for another season?

“I am always thinking about season two,” confesses France, who hopes to grow this alongside working on fan favourite, Queer Eye. “I am praying – it was some of the most fun I’ve had in a very long time.”

“It was very funny, I laughed every day,” Chung finishes. “It was delightful.”