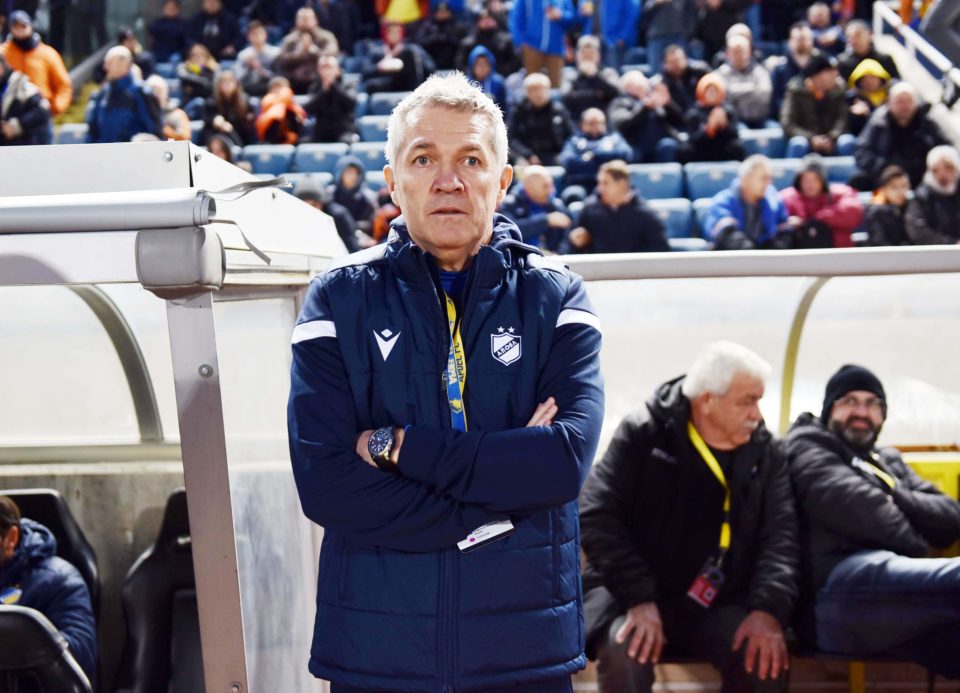 Kore Ingebrigsten (left) became the latest managerial casualty at Apoel this season, with the champions replacing the Norwegian after just ten games

Kore Ingebrigsten’s reign as manager of Apoel came to an abrupt end after just seven weeks in charge when the champions announced the termination of his employment on Tuesday morning.

He is the fourth head coach to lose his job with the Nicosia giants this season, following a string of inconsistent displays

A statement read: “APOEL FOOTBALL (PUBLIC) LTD announces the termination of its cooperation with Kare Ingebrigtsen. We thank Mr Ingebrigtsen for his best efforts during the period of our cooperation and wish him good luck for the next step of his professional career and the best for his personal life.”

Ingebrigsten had signed a contract with Apoel until May 2021. The Norwegian had enjoyed a successful career with Rosenborg. In his four years at the Norwegian club, he won three league titles, two Norwegian Cups as well as guiding his team to the group stages of the Europa League twice.

Speaking to media in his homeland, Ingebrigsten’s immediate reaction to his sacking was one of disbelief and disappointment. “I’m shocked. I had a long-term plan for Apoel but after 10 games I got the sack, I did nothing wrong” said the perplexed Norwegian.

“Nobody called me from the club, just an agent to inform me of the board’s decision. When this happens so quickly after you get a job, people automatically think you have done something wrong but I didn’t.

Though Ingebrigsten was shocked by the decision it did not come as a surprise to local pundits. Recent results have been poor (just four wins in Ingebrigsten’s last ten games), with the current top brass at Apoel notorious for the ease with which they sack managers.

Rumours of his dismissal have been circulating on the internet since Monday.

Since taking charge back in 2013 the current board has seen no fewer than 13 managers come and go and this does not include four-five interim managers.
Just two managers have managed to see out a full season, Giorgos Donis and Thomas Christiansen, and this in a period which saw Apoel win seven consecutive championships.

This season though the board has ‘outdone itself’. Since the beginning of the season they have sacked three managers and also replaced one interim manager.

Paolo Trammezzani began the season as coach but was replaced in early August by the German Thomas Doll. Doll was hailed as a saviour after steering Apoel into the group stages of the Europa League after a poor start to the competition under Trammezzani.

However poor results in the domestic league led to his sacking in December with Loucas Hadjiloucas taking over as interim manager.
Just before the turn of the year Hadjiloucas was replaced by Ingebrigsten.

Fifty-one-year-old Greek coach Marinos Ouzounides is the board’s choice to take over as manager. Funnily enough Ouzounides’ first team as a coach was Apoel back in season 2006-07, and he led them to championship in his first season. He was also an Apoel player for two years from 2001 to 2003, winning the title in 2002.

Former Apoel legend Nuno Morais will be his assistant while Hadjiloucas will take over a scouting role.

Managerial changes have reaped results for the current board but the odds are stacked against them this season as they are currently five points points behind leaders Anorthosis and the team has been woeful in most games this season.

We will know in May if their decisions will be vindicated with an eighth consecutive league title.