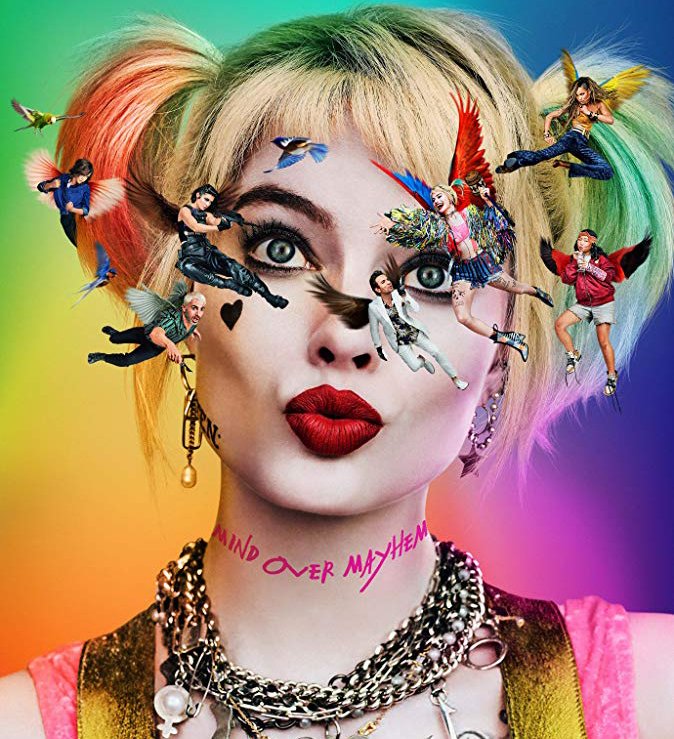 Can we call them ‘Little Women’? Afraid not, that title is already taken – but, more importantly, anyone using such belittling language may find it hazardous to their health; Birds of Prey is full of scenes where men (it’s always men) try to bully or denigrate the titular ladies and get beaten up, or worse. Rowdy corporate feminism is part of the deal here – and of course the guys deserve it. Renee Montoya (Rosie Perez) is a cop forced to report to a man who took credit for her own police work and passed it off as his own, getting the promotion that should’ve gone to her. Black Canary (Jurnee Smollett-Bell) is a nightclub chanteuse with a killer voice – but the song she sings is James Brown’s ‘It’s a Man’s Man’s Man’s World’.

The Birds – a superheroine crime-fighting team, though they only team up at the end of this origin story – include both Renee and Canary, as well as Huntress (Mary Elizabeth Winstead) who’s avenging her family’s murder with a crossbow and a bad attitude. They’re not really superheroes (though BC’s voice does semi-count as a superpower), more like “badass broads” fighting fire with fire – and the film’s true heroine isn’t even part of the team, being far too cool and anarchic to play well with others. That would be Harley Quinn (Margot Robbie), the breakout star of Suicide Squad, girlfriend (now ex-girlfriend) of the Clown Prince of Crime, Joker himself – and undoubtedly the reason why this film will be a hit, the other heroines (like the plot in general, which involves a stolen diamond) being adequate but not too exciting.

Harley is part Deadpool, part Marilyn, part punk-rock Lolita with a stuffed (toy) beaver, part Robert Downey Jr in Kiss Kiss Bang Bang – an unreliable narrator whose narration either goes off the rails (“Hold up, I’m telling it wrong!”) or flatly contradicts what we’re seeing. “I handled it real mature,” she assures us of her break-up with Joker – but in fact she’s a sodden mess, and it’s actually worse than that: losing Joker (who never appears in the film) also means losing Joker’s protection. Suddenly, everyone with a grievance against Harley comes out of the woodwork – and there are a lot of people with grievances, from “some Frida-Kahlo-looking asshole” whose name she can’t even remember to a guy upset about his brother, whom Harley fed to a hyena. Fair enough, I guess – though in fact the brother was a creep and besides the hyena is Bruce the Hyena, a loving pet who lives with Harley in her poky flat above a Chinese restaurant.

The film, as you may have guessed, is very Deadpool, conspicuously snarky and devil-may-care. It’s snarky about violence, too – “If you want boys to respect you, you have to show them you’re serious. Blow something up. Shoot someone” – though in fact the worst violence is committed by evil Roman Sionis (Ewan McGregor), who confirms his supervillain credentials by correcting his henchman’s vocabulary (he also has a penchant for peeling off people’s faces). Harley herself isn’t so bad – and Robbie is magnificent in any case, finding not just the skanky amoral party animal but the white-trash abusive background which led to that amorality (every father figure in her life has let her down). Sometimes Harley babbles, sometimes she’s little-girlish (“Isn’t this fun? It’s like a sleepover!”); sometimes she emotes in a kind of stoned slo-mo, which is also hilarious. She’s also a sociopath and a quote-unquote ‘terrible person’, but nobody’s perfect.

The film deserves some kudos for clocking in at under two hours, though it still feels a little drawn-out; there’s a thrilling climax in an amusement park – but then also a car chase, and a finale on a foggy pier. The basic problem, as in most comic-book movies, is that it hits the same note over and over, because comic-book characters have a specific persona. Just as Spider-Man is a series of variations on ‘Puppyish boy who’s eager to please’, Birds of Prey is a series of variations on ‘Flamboyant kook who’s outrageous yet also girly’. Even Joker was one-note, for all its ambition and Oscar nominations.

Birds of Prey is subtitled ‘the Fantabulous Emancipation of One Harley Quinn’ – but in fact Ms. Quinn’s emancipation (from Joker) comes early, then it’s basically Margot Robbie being awesome for 90 minutes. The visuals are cartoonish – a greasy egg sandwich assembled in extreme close-up, that kind of thing – even the feminism is a bit cartoonish; when Roman humiliates some random woman because he thinks she’s mocking him, the film may think it’s depicting a profound truth (basically the quote attributed to Margaret Attwood: “Men are afraid that women will laugh at them. Women are afraid that men will kill them”), but it feels more like gratuitously exploiting that truth to jazz up its narrative. Birds of Prey is fun, but a little… I dunno, dumb? “Call me dumb? I have a PhD, motherf**ker!” I stand corrected.

Randi Zuckerberg, Creator of Facebook Live, is coming to Cyprus for the 1st time