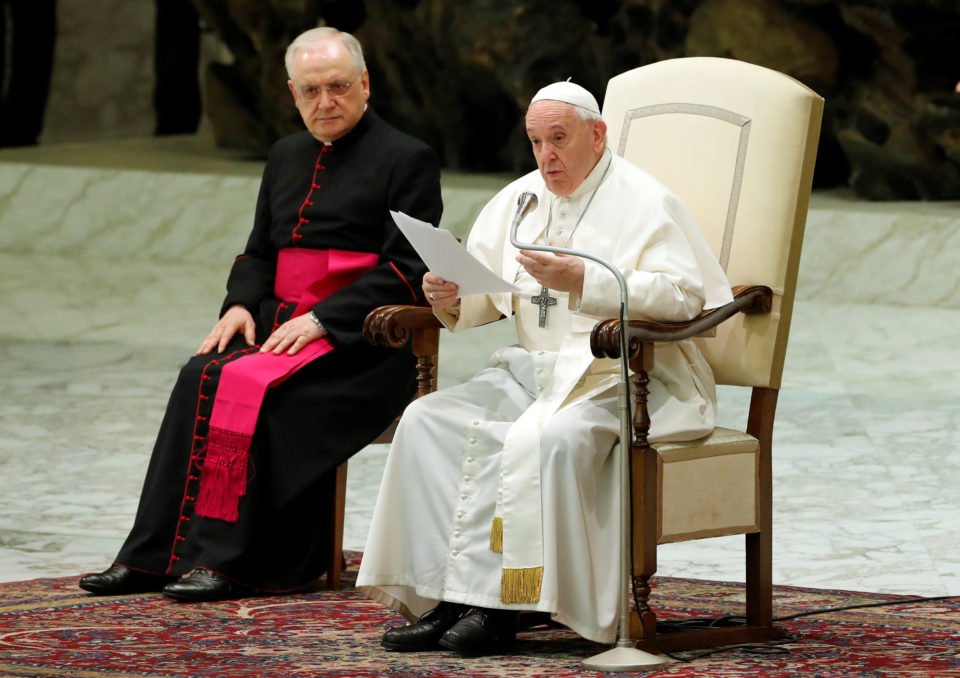 Pope Francis holds the weekly general audience at the Vatican

Pope Francis on Wednesday dismissed a proposal to allow some married men to be ordained in remote areas, reaffirming the Roman Catholic Church’s centuries-old commitment to celibacy among priests.

The decision, one of the most significant of his papacy, appeared a victory for conservative senior clergy, who had feared a slippery slope towards a married priesthood throughout the Church if the recommendation was approved.

It was put forward by Latin American bishops as a means of easing an acute shortage of priests in the Amazon region, and passed by 128 votes to 41 at a contentious Vatican assembly, or synod, of Roman Catholic bishops.

Three months after that vote, Francis delivered his response, ignoring the proposal altogether in an Apostolic Exhortation, a mechanism used to instruct and encourage the Catholic faithful but not to define Church doctrine.

Cardinal Gerhard Mueller, the Vatican’s former chief doctrinal official and a leading conservative critic of the pope, called it “a document of reconciliation”.

He and others had branded as heretical synod documents that included the proposal, which sought to allow older married deacons who are proven leaders of remote Catholic communities and have stable families to be ordained as priests.

The issue of married priests has been a focus of deep divisions within the Church, and Vatican sources say it is now likely to languish for the rest of Francis’s papacy.

That marks a setback for the progressives who have welcomed his reformist stance on some social issues, such as being more welcoming to divorced Catholics and homosexuals and – with caveats – his willingness to confront a legacy of sexual abuse within the Church.

In what some viewed as a strategically timed appeal to Francis not to approve the Amazon proposal, a book published last month by Church conservatives defended the tradition of priestly celibacy.

“From the Depths of Our Hearts” was co-authored by Cardinal Robert Sarah and Former Pope Benedict, though Francis’ predecessor subsequently disassociated himself from the project.

Vatican officials said the pope completed the Exhortation on Dec. 27, before the book controversy, and handed it in for translations. They said no changes were made after that.

The 83-year-old Argentine pope wrote that new ways must be found to encourage more priests to work in the remote region, and allow expanded roles for women, lay people and permanent deacons, of whom the Amazon needed “many more”.

Deacons, like priests, are ordained ministers. They can preach, teach, baptise and run parishes, but they cannot say Mass. Married men can become deacons.

Because only priests can say Mass, people in at least 85% of Amazon villages cannot attend the liturgy every week and some cannot do so for years.

In his document, Francis suggested solutions to solve the shortage of priests that his conservative critics had made, such as praying for more vocations and sending more priests already in the nine Amazon basin countries to remote areas rather than abroad.

“This urgent need leads me to urge all bishops, especially those in Latin America… to be more generous in encouraging those who display a missionary vocation to opt for the Amazon region,” he wrote.

At a news conference presenting the document, Cardinal Michael Czerny, who was the synod’s secretary, acknowledged that the pope had listened to some of the solutions proposed by his critics.

The issue of celibacy has been discussed in other countries with a shortage of priests, including developed ones such as Germany, and some Eastern Catholic rites already allow married men to be priests.

Frances used the first three chapters of the document to restate his longstanding defence of the rights and legacies of indigenous people and the environment in the Amazon, which he said had to be protected.